Tonight’s episode of Real World New Orleans was a bit of a roller coaster going from parade to parade with stops along the way involving McKenzie’s drinking and choice of men, Jemmye’s relationship with her friend/boyfriend/ex and, later, her explaining to Knight what happened in a previous relationship. It’s pretty crazy.

Haha McKenzie doesn’t know what Bohemian means. I’m not sure Knight does either.

McKenzie says she’s a gypsy, that her and a bunch of her friends would travel around and steal stuff. Ryan gets really freaked out about it, either because she’s lying or because he believes her. He refers to both.

Haha, Knight draws a bubble bath for Jemmye and himself, but everyone shares that bathroom so people are in and out. Preston even jumps in in his tighty whities. 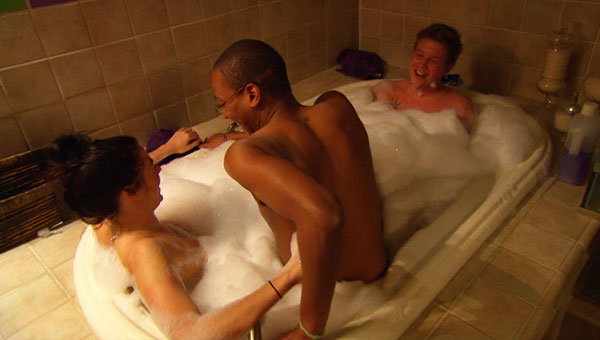 The roommates are going to be on a float. It looks pretty rad. It’s called the Tucks Crew. I don’t know what that means. They’re on a float making fun of the Army Corp of Engineers who built the levies that failed. Is that what happened?

Preston and Ashlee are interviewing people for their radio bit. Let’s hope they figured out how to actually use the recorder.

Preston and Knight are trading beads for food because they didn’t pack a lunch. 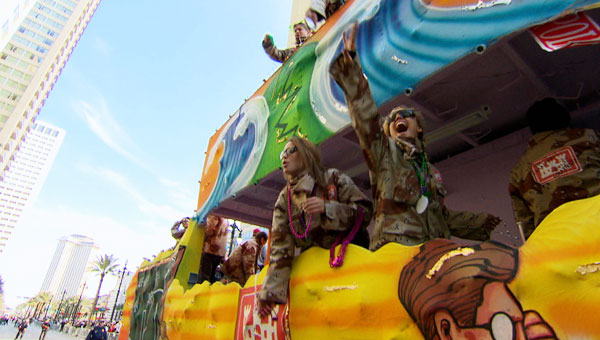 Preston asks Ryan about squashing their beef, but Ryan comes back with saying that if they’re not going to be friends, they might as well be peaceful.

McKenzie’s drunk at a party again and letting a dude get all up on her because he bought her a drunk. The guy swears at Jemmye and she bounces. Jesus, dealing with this broad sounds like a nightmare. 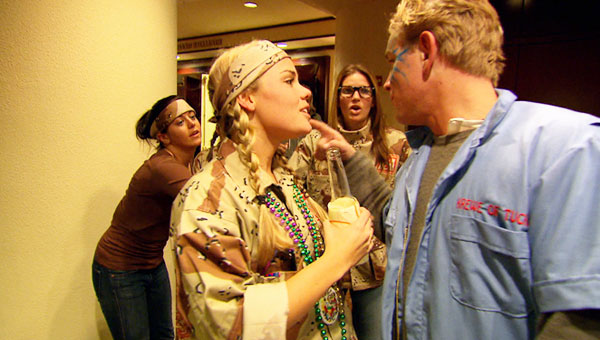 Knight’s suspicious that Jemmye’s playing down her relationship with Kodi, this dude she either met right before coming out or who she broke up with right before she came out.

Oi, Kodi plays some sport. He’s got a game at LSU and Jemmye is thinking about going with one of the roommates to visit him afterwards.

Ryan tells Knight that he lied when he squashed things with Preston and that he hates him even more. WHAT?!

Ryan also says that Knight is his best friend, which comes out of nowhere.

Sahar’s trying to tell McKenzie that she’s worried about her drinking and she just keeps playing with her beads. Ugh. She says she’s going to keep an eye on it.

Ryan tells Knight he’s not real cool with him and Jemmye being together because he (Ryan) wants to hang out with Knight. It’s weird.

Knight says he likes being with Jemmye because it’s easy and doesn’t take much effort. Also, that he doesn’t see them getting together.

Jemmye’s having second thoughts about going to visit Kodi.

Eric and Sahar are kind of turning into the lost roommates, which is funny because he’s into her. Maybe they’re sneaking off to bone!

While out at a bar, Knight’s chatting a girl up while Jemmye’s sitting right there, which pisses her off.

Hey, wow, McKenzie’s talking to a dude that doesn’t seem like a complete skeez. She’s also not drunk…yet. 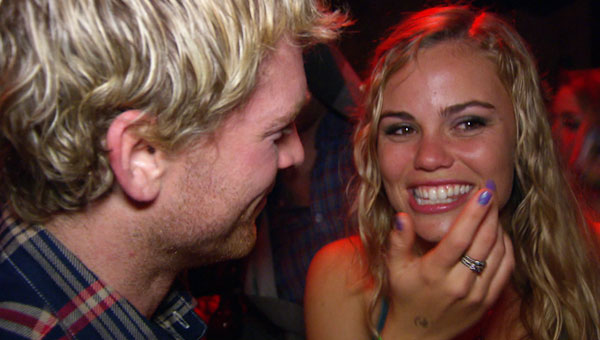 At the club, Jemmye tells Knight she doesn’t think she’s gonna go to Kodi’s game. Knight tells her she might as well go. She seems upset. Commercial break.

Knight calls the girl from that night and asks her to come over to the house. Ashlee tells him he’s being an ass. Then he asks Jemmye for directions. I think he hung up on the girl. Jemmye’s pissed. She pushes him into the confessional. (I thought it was the next day at first). 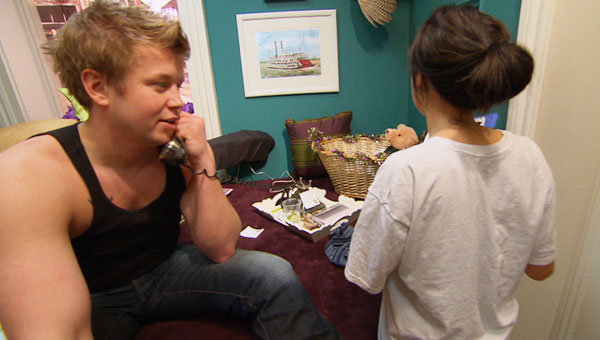 In the confessional, Knight says he feels like a shithead because she’s got a guy back home. He tells her to talk to him again when she deals with Kori. He says he’ll be the Knight he wants her to be when she finishes things with Kori.

Eric’s telling her to go because it’s someone from her past.

Jemmy’e going to Kodi’s game. She thinks seeing him will help her decide if she wants to be with Kodi or Knight. Ashlee drives her.

Jemmye’s all nervous waiting for him outside. Whoa, he’s way tall, like twice her size. Oooh, Kodi’s whole family is there too so it’s super awkward. He’s the tall, quiet type. Seems kind of like a douche, but it’s hard to tell cause he says nothing. 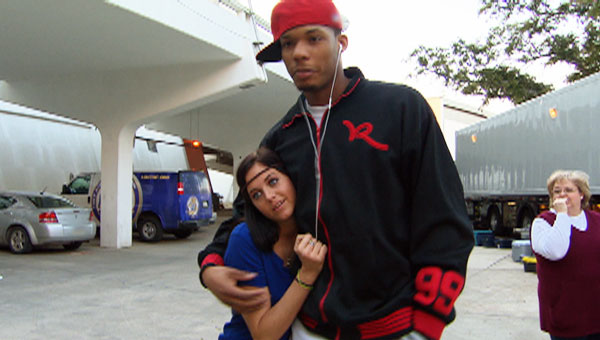 Knight puts McKenzie’s name over the Madame SOMETHING fortune teller machine. She’s sitting in front of the thing and everyone’s tossing out jokes, but she doesn’t see it.

McKenzie runs into Travis at a bar. Huh, Travis had a streak where he would black out and he wanted to get away from that, so he doesn’t drink as much and being around him means that McKenzie isn’t drinking as much. He seems like a good dude, but he’s only there on spring break.

Jemmye doesn’t seem thrilled with her meeting with Kodi. She comes home and gets in bed with Knight. She says she has a deeper connection with Knight than Kodi.

McKenzie brings Travis back to the house, but he leaves soon. Preston says he might have been in her life for a short time just to teach her a small lesson. She seems receptive to that.

Ah, it’s Fat Tuesday, the last day of Mardi Gras. Ashlee and Preston have a meeting soon to present what they have, but they can’t find the recorder. Man, they are just screwing the pooch on this pretty fantastic opportunity.

Preston calls the dude, but he’s not pissed. He says not to worry about, these things happen at Mardi Gras. They lucked the hell out. 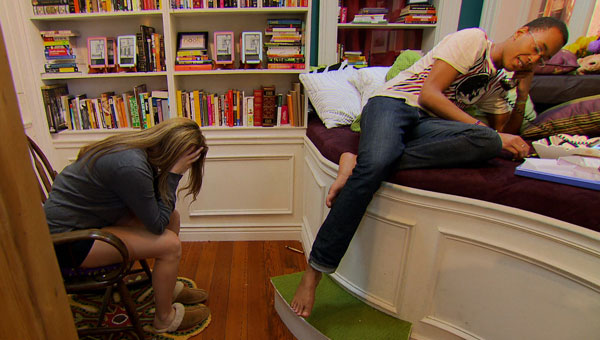 Their Fat Tuesday outfits are…interesting. Jemmye’s definitely flashing for beads, I don’t know if the other girls were, but they’ve all got a LOT of beads. 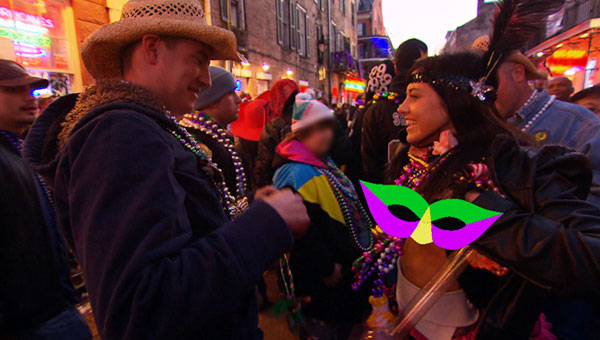 Looks like a pretty intense, yet super gross party.

Ryan comes out either naked or in a very small bathing suit and asks Ashlee and Sahar if they want to get in the hot tub. He says he has his suit on and gives them a creepy look.

Jemmye and Knight are at the bar and she’s telling him about her past abusive relationship which lasted a year and a half. This actually makes a lot of sense with how she acts with men. Like any good dude, Knight has trouble with the news.

Huh, the cops roll through late at night and wash the street? New Orleans is so weird.

Drunk in the confessional, Knight says he loves her and that Jemmye’s his girl, which seems like a flip from the last time. 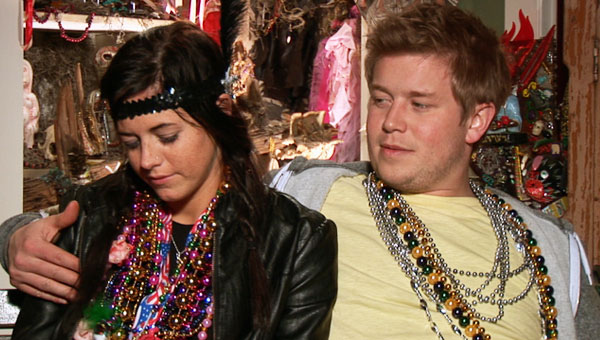