When I first began kicking around ideas for Halloween-y books to pull off my shelves and read this season, Astro City: Confession popped into my mind almost instantly. However, when I went to said shelf, I was surprised to see that this was one of two volumes from the series’ early run that I didn’t have. To Amazon I went and now I’ve got a nice hardcover version from DC’s sadly defunct Vertigo imprint. I’m not sure it’s possible to really talk about this book without getting into spoilers, so consider yourself warned and go out and read all of the Astro City you can find!

For the uninitiated, Astro City features a whole super hero universe revolving around the town of the same name created by Kurt Busiek, Brent Anderson and Alex Ross. Launched in the mid 90s, the title not only showed off the huge creative potential these three boasted as they filled the city with colorful characters, but also the themes of exploring what it would be like to really life in a world like this that Busiek has dealt with in a variety of places from Spider-Man comics to Marvels.

When the series was first coming out, it was covered like crazy in Wizard. Say what you will about the mag, but through it I learned so much about comics I never would have heard of otherwise. Astro City always seemed so cool and unique and filled with mysteries and poignant stories that you couldn’t get anywhere else. Plus, those Ross covers and designs were (and still are) some of his best work! Eventually, I made my way through most of the original stories and have distinct memories of so many of the tales being written about in Wizard that it’s a great nostalgia loop for me.

One of the biggest mysteries seemed to stem from Astro City Volume 2 #4-9 and revolved not only around the dark, religious-themed character called The Confessor, but also the brutal murders going on around town at the same time. That’s the kernel that lived on in my brain, along with the eventual reveal, but we’ll get there. 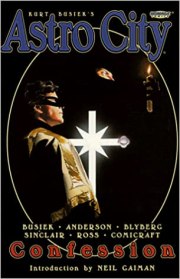 Like a lot of great Astro City books, this one starts off on the ground level with a normal kid from out of town, Brian Kinney, seeing the city through fresh eyes. He starts off working at a bar for super folks, but eventually winds up at a classier establishment where he shows a few skills that eventually lead to him meeting The Confessor! Not long after, the Kinney boy became the religious-themed sidekick Altar Boy.

Throughout the run, we’d also been hearing about these brutal killings going on in the Shadow Hill neighborhood. As it turns out, there’s a lot more going on in Astro City than all that as the mayor starts making sweeping anti-hero statements that result in the capture of many heroes. This all proves to be part of a much bigger scheme that Confessor sussed out for all to see, though he paid a dear price for that glimpse of truth.

Alright, time to get into SPOILERS. It doesn’t take too long for burgeoning detective Altar Boy to figure out that his teacher was actually a vampire! Confessor revealed his origins which went all the way back to the earliest days of the town, but he kept his bloodlust down through faith and wearing a giant cross on his chest. In my mind, he was also still doing the killings, but that wasn’t the case in the story, though they were pinned on him after he died exposing the mayor as an alien! It turned out that a Lovecraftian demon was causing the Shadow Hill murders, but was taken out by one of my favorite characters in the book: Hanged Man!

Though it certainly has horror elements in it, the great thing about Astro City: Confession is that it contains all sorts of other genres and the results are purely fantastic super hero comics dreamed up by Busiek and Ross and brought to life by Anderson who does such a great job of capturing the mundane and the sublime. Was this the perfect Halloween-time reading? Probably not, but it made me very excited to go back and read all of the Astro City books sitting on my shelf when I’m done with these darker days!