Last night was a big one for TV premieres. How I Met Your Mother and Big Bang Theory being two of my favorite shows on TV, I was jazzed to see them back, plus Castle was the surprise hit of my TV watching season (and I enjoy it even more now that I’ve seen Firefly). So here goes.

HOW I MET YOUR MOTHER
I thought this was a really strong season opener. I had kind of forgotten where things left off last season and missed about the first minute of this episode, but I dug Ted’s new job as a professor (how did he get that gig?) and Barney and Robin’s relationship and Lilly’s manipulation of that. Plus, you get some awesome whip work AND Barney punching that big guy in the face! “I’ll punch a BABY!” Great line, can’t wait to see where things go from here.

ACCIDENTALLY ON PURPOSE
AOP didn’t really grab my attention thanks to the commercials, but I used to watch Dharma & Greg and nothing else was on, so what the hell? I was surprised with how much I liked it, even though it’s basically Knocked Up The Series, but without Katherine Hiegl, thank Christ. Unbeknownst to me, the show features two other amazing actors. You’ve got Ashley Jensen who was brilliant on Extras as the kinda slutty friend and Grant Show as her ex boyfriend (he was on Swingtown, which we just finished watching and I’ll get to soon enough cause it was great and so was he). Like I mentioned it feels like Knocked Up with Sex In The City thrown in (one friend’s a slut, one’s a prude!) with whatever show features young slacker dudes, but it gets a pass for now.

BIG BANG THEORY
Now, this was a season finale I knew: the guys were leaving for the arctic when Penny realized she loved Leonard. And it paid off with Penny and Leonard finally getting together…again. I hope they don’t do something weird like they did after they started dating at the end of the first season. The whole Sheldon-being-angry thing lead to some pretty funny moments and I’m always excited to see former Roseanne cast members showing up like Laurie Metcalf as Sheldon’s mom. I did notice that there didn’t seem to be as many DC Direct figures in the background, but I did see a bunch of Showcases and the four Jack Kirby Fourth World Omnibi on one of the shelves in Sheldon’s bedroom. Unfortunately, they didn’t pan up, so I couldn’t see what covers were framed above his bed. When I interviewed the producer for ToyFare, he said they actually switch those out. OH, you could also see comics in bins behind Penny sporting a Batman comic of some kind, JLA, The Demon. Good stuff. 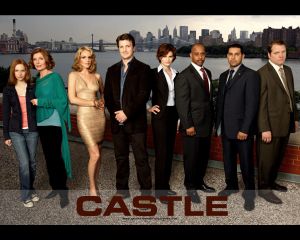 CASTLE
I’m pretty sure Castle is the only procedural we watch at this point (does Fringe count?), but I just dig the characters. Fillion’s charming as hell, his partner’s rad and I hope they do get into the death of her mother more, because it sounds like something big is going on there. The episode itself was satisfying and sexy and what more do you want?