On this week’s episode, I let you into the wonderful world of It’s All Connected 2021, the horror film project I do wherein each movie is connected to the previous in some way! I’ve already gone through six flicks and it’s only August, so hopefully this will be the best year yet! If you’re curious about last year’s It’s All Connected, you can find all the links here!

If you’re curious, here‘s my review of The Dead Zone book from several years back. 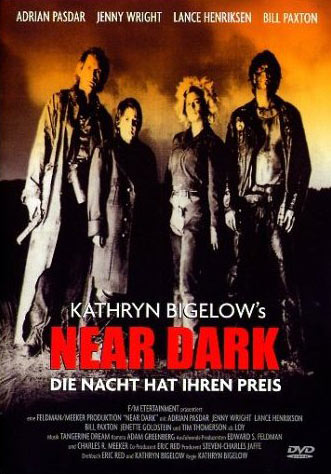 I can’t tell you how much I wanted to love Near Dark. First off, it’s a horror movie directed by an Academy Award winner (not to mention the director of the awesome Point Break). Yup, that’s right, Kathryn Bigelow directed this vampire flick starring Lance Henriksen, Bill Paxton, Tim Thomserson and Adrian Pasdar. Sounds like a pretty great line-up, doesn’t it?

Well, it is a good line-up, but I just could not get into this movie. Yes, the fact that it’s about a pack of vamps living in the west is kind of a nice change of pace, but the fact that it’s about a new vampire (Pasdar) who doesn’t really want to be vampire trying to figure out what he’s going to do with his unlife just felt SO been-there-done-that that I did care. In my mind I kept comparing it to John Carpenter’s Vampires (that’s probably sacrilege, I know, but I saw that movie first) and From Dusk Till Dawn. Oh, and Lost Boys, it reminded me a lot of Lost Boys without the fun of being able to watch the two Coreys doing their thang.

So, yeah, the basic plot was boring, even though the vampires were fun to watch. The combo of Henriksen and Paxton was fantastic. Actually, I should say not all the vamps were fun. Homer–played by Joshua John Miller who I also hated in Class of 1999–posed a pretty big problem for me in the movie and not just because I dislike the actor so intensely. See, the idea is that he was a kid when he was turned into a vampire, but like Claudia from Interview With A Vampire, he ages metnally while his exterior remains the same. He even goes on about how much it sucks to me an old man in a young kid body. Yet, later in the movie, he becomes obsessed with Pasdar’s younger sister (her and his dad have been out looking for him while he’s been gallivanting around with the vamps). If he’s an old man, why is he going after young girls unless he a pedopire, which just makes the whole thing way creepier than expected. I get that he might want to turn her now and then wait for her to mature, so they can be creepy old people trapped in young bodies together, but it really looks like he’s lusting after her in the movie and it’s just gross.

The ending of the movie’s also pretty stupid. Let’s call this SPOILER TERRITORY in case you’re worried about having a 23 year old movie spoiled for you. See, Pasdar stops being a vampire because his dad gives him a complete blood transfusion. That’s just plain stupid, especially considering these are pretty standard vampires with super strength, healing abilities and an aversion to daylight. There’s got to be something mystical going on there and not just a blood disease. If you’re going to set up rules in your story, you have to follow them a little better.

Ah well, there you go. I actually watched this one a few days ago and then I got to see Expendables and Scott Pilgrim, so I ended up in the plus column movie-wise this week.

Okay, so there’s a channel we get called My 9 that shows basically all syndicated shows. It’s not usually a channel I watch, but I happened upon a King of Queens rerun which had both comic convention staple Lou Ferrigno and comedian Patton Oswald (plus, remember when Leah Remini played Alyssa Milano’s friend on Who’s the Boss?). Anyway, during KoQ I saw a commercial for an upcoming episode of Twilight Zone which I SWORE had Heroes’ Adrian Pasdar and Shannon Elizabeth. So was I right?

Yup. I stuck around for the next hour as Forrest Whitaker introduced me two different episodes from the 2002 TZ relaunch. I’m a big fan of these kinds of shows (the original TZ of course, both the old and new Outer Limits and, my favorite, Tales from the Crypt) so I would have watched anyway (it also helped that Em was out running errands and visiting a friend).

So anyway, yeah the first episode of TZ I saw was called “Dream Lover.” In it, Adrian Pasdar plays a graphic novelist (that’s a comic book writer AND artist for the less pretentious). He was super successful with his first graphic novel and is trying to work on his second so he starts drawing this sexy woman in a towel who comes to life. He assumes she’s his muse and only he can see her, but it turns out to be a big twist (duh) and that SPOILER SHE actually created HIM! Oh snap!

I’ll be honest, I didn’t see that twist coming so it was a pretty welcome treat. Overall the episode was great. I couldn’t place the artist who drew all the comic book drawings (and IMDB wasn’t much help), but it looked like pretty solid art. Shannon Elizabeth’s character even drops (or tries to) a comic book in-joke with the line “Alan Moore couldn’t do better.” Now, this is funny for two reasons. The first is that Alan Moore’s name got said on TV (it’s still weird for me to see comic creators mentioned in the “real” media). But the REAL reason it’s funny is because Adrian Pasdar is DRAWING at the moment.

It’s a great episode to check out for comic fans, it even reminded me of a Tales from the Crypt episode where Harry Anderson plays a comic book artists whose creations keep coming to life (though I think they kill him or something, it’s been awhile).

Oh, one last thing, when Shannon Elizabeth first appears and Adrian Pasdar disappears at the end of the episode the effect is straight out of A-Ha’s video for take on me.

The second episode was a standard bad-guy-getting-haunted-by-kids-he-accidentally-had-killed story. The only thing that really elevated it was that Jason Bateman played the guy. Also, they made him agoraphobic, so he’s actually too scared to leave his house and once he really tries to the kids have locked him in with creepy kid magic. And by that I mean these kids are super creepy. Not, twins-from-The-Shining creepy, but close.

One day I hope to get the Tales from the Crypt DVDs or even the original Twilight Zone DVDs and do disc-by-disc or season-by-season reviews. Any PR people out there listening?