On this week’s episode of the podcast, I’m celebrating a quintet of women horror directors whose work has blown me away recently. I’m talking Chelsea Stardust, Nia DaCosta, Danishka Esterhazy, Leigh Janiak and Jackie Kong!

Throughout the episode, I mentioned the following episodes:

After more of a delay than planned, Mr. Dastardly came over to my place to watch The Invitation and The Sacrament. Watch the movies, then listen to it here, if you dare and check out the trailers below…also if you dare.

In the episode I mentioned Killer POV and Shock Waves. You can listen to Karyn Kusama talk about The Invitation here while Ti West discussed all of his films in this episode. 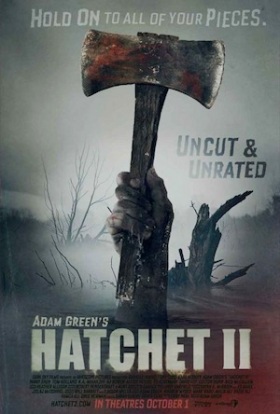 I wish I had watched the first Hatchet before watching Hatchet II. I’ve seen the movie once before and I know I liked it, but considering the sequel picks up right from the last scene of the previous movie, it would have been nice to do a kind of mini-marathon. Thanks to a fair amount of recap, I remembered what was caught up to speed (really, all you need to know is that Danielle Harris and a group of tourists got attacked by a slasher named Victor Crowley in the swamp, she was there because he killer her family members). As things pick back up, Harris is joined by voodoo practitioner Reverend Zombie (Tony Todd) and a group of hunters to go into the woods and cap Crowley thanks to a bounty offered up by the good rev.

The story picks up pretty quickly, which I like, but not too quickly. We get enough bits and pieces about the different characters, none of whom are particularly awful and then they reach the location of their ultimate demise. And man, do these people get taken out in some creative and gruesome ways. I don’t think I’ve ever seen so much damage done to the human head in a horror flick. Smashed, chopped, sliced, sawed, split, this one’s got them all and they all look good, which is impressive because a human head/face is one of the hardest things to replicate and make authentic-looking.

The story’s interesting and character’s fleshed out enough, but the two keys to this movie for me are the practical effects and the ways it plays with the conventions of slasher movies. I’ve already discussed the effects which might be some of the best I’ve ever seen, but the flipped tropes are also worth talking about. Without giving too much away, Victor doesn’t pick everyone off one by one until only the final girl is left. In fact, not only are the victims this time armed and hunting him (a change from the usual), but they also come upon him in a group and try to attack him at once. It doesn’t work out super well, but it happens. They also throw a character up against Victor who actually seems like he or she can do some real damage. And that ending! Did not see that coming.

I really don’t want to go into too much detail, but I think this is my most recommended movie this October. All the slasher conventions are there, though they’re also played with. The acting’s great, though not overly deep. The kill scenes are phenomenally well done with more blood that I think I’ve ever seen on screen. If you thought the slasher movie was dead and gone with acid washed jeans and Bon Jovi, think again. Adam Green’s the real deal, folks! 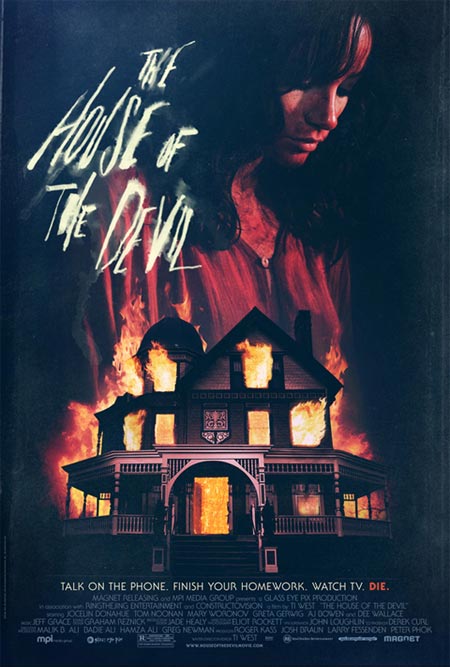 So, a lot of people dig this movie. I started hearing about it some time last year, that it was a great, slow burn movie that looked like it was straight out the 80s even though it was filmed in 2009. Well, I can agree with that, at least. It does look authentic. From the cars to the old school Walkman and even the local news kicking it over to the local horror movie show (I think they’re showing Night Of The Living Dead). I guess it also feels slow, boring and confusing like a lot of 80s movies too.

As if you couldn’t tell, I’m not a fan of House Of The Devil. See, the idea behind the movie is that this girl Samantha has just gotten a great deal on renting a house, but has no money (kind of makes you wonder why she decided to take on this financial burden, eh?). She sees a flier for a babysitting job and ends up getting it, but there’s a twist. Let’s call the rest of the review SPOILER TERRITORY just for safety’s sake. The twist is that there’s no baby, but the ultra-creepy couple has an old lady who won’t bother the girl. After upping the pay, Samantha takes it. Her friend, who dropped her off, leaves (the house is out in the middle of nowhere Last House On The Left-style), so she spends most of the movie getting freaked out by sounds and what not. But it’s not even that interesting. There’s a freaking dance scene with her listening to her Walkman and knocking over a vase. Really? Has this ever happened to any living person?

Eventually, she gets drugged and knocked out. Then the mom and dad are back and the grandma’s a monster and she’s tied up and then she struggles enough to get out (I guess the other victims didn’t struggle to get out) and then she runs UP THE STAIRS. It goes from being boring to kind of crazy for a second to being just plain stupid and then ending with a bit of a shocker (followed by a huh moment when it turns out she’s still alive).

All in all, I wanted to like this movie, but an 80s aesthetic wasn’t enough to get me involved in the movie and my attentions soon wandered. Also, I liked the actress who played Samantha, but I wish the much more interesting Megan had been the main character.