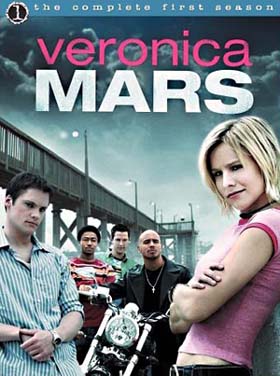 Man, you guys, I love when I wind up really liking a show I didn’t think I could even get through. I had heard good things about Veronica Mars, but thanks to a general dislike of things other people get SUPER excited about and a growing dislike of Kristen Bell, I wasn’t super interested. But, pretty much anything showing up on Netflix Instant gains my attention. One day I was feeling curious and the missus and I were in need of a new show to watch, so we jumped in and wound up devouring most of the series in a pretty short amount of time (we started right before she gave birth to our daughter and wound up finishing the other day).

My dislike of Kristen Bell stems less from a dislike of her as a person and more so the characters she’s played in movies like Forgetting Sarah Marshall, Couples Retreat and Burlesque (where the young-looking 30 year old actress hilariously played a washed up veteran dancer, a role that should have gone to someone older or more broke looking than Ms. Bell). She was really good at playing assholes to the point where I couldn’t really see myself liking her in a different role (I must have forgotten her in Fanboys). Thankfully, it turns out she’s a pretty damn great actress and the role of Veronica Mars seems absolutely tailor made for her and suits her perfectly.

The general idea behind VM is that Veronica works for her dad’s private investigative firm. The cases she handles, though, usually involve students at her high school and later college asking her for help to figure something out while overarching mysteries play out over the whole season. The first season revolves around Veronica trying to figure out who killed her best friend Lilly (can’t tell you how disappointed I was when I discovered that the beautiful Amanda Seyfried was on the show, but playing a dead girl who spent a good deal of her on-screen time in weirdly lit dream sequences or with gaping head wounds). The second season focuses on the murder of several students who were on a bus that crashed into the ocean. The third actually finished up it’s overarching story early on, but most of it dealt with a serial rapist at the college Veronica (and many of her high school friends) wound up attending. 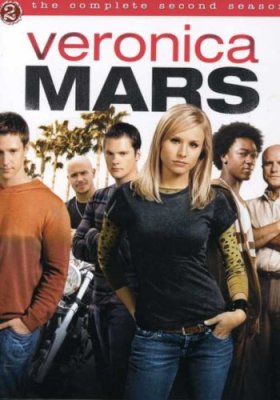 When I asked my buddy Ben Morse about the series–he was a big fan when it was actually on–he said that the first season was an incredibly tight season of television with a fantastic mystery and then the quality kind of went down from there. I actually really dug all the seasons. Some of the mysteries-of-the-week might not have been quite as interesting as the other, but I thought that overall the writing and acting were of a surprisingly excellent level.

I’d like to give whoever casted this show a hug because he or she did such an amazing job. Bell is perfect as Veronica, starting off hard and jaded thanks to her fall from grace, but eventually getting more comfortable. At the same time, she’s a real ass-kicker who doesn’t let anyone give her shit. That’s a great character and one you don’t see often, especially in such a likable package. You really want to hang out with her, but also stay on her good side. I also loved her dad, Keith Mars, played by Enrico Colantoni. He walks that tightrope between dad who lets his daughter work cases for him and bulldog. He doesn’t look like the most threatening dude in the world, but there are times where he really puts the screws to someone and you can’t help but cheer. Her friends Mac (Tina Majorino), Wallace (Percy Daggs III) and Weevil (Francis Capra) are all pretty good at their roles. Her one time boyfriend Duncan (Teddy Dunn) was a bit wooden, but lowered expectations actually lead to some really surprising moments from him. Background character Dick (Ryan Hansen) is this amazing example of a rich kid who truly doesn’t seem to have a care, worry or thought in his head beyond getting laid or drunk…until the end. Most impressive, though, for me was Jason Dohring as Logan. He starts off as this total asshole, but has the biggest progression as far as character goes from the beginning of the series to the end becoming something of a tragic hero by the end. Dohring has a great skill for conveying a lot with a little look or nod and saying nothing. I was most impressed by him and think he should be a pretty big star. 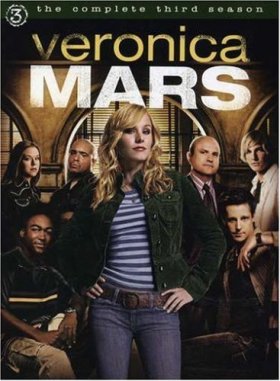 The series also sported some great guest stars like Harry Hamlin as Logan’s dad, Charisma Carpenter as Dick’s step mom and Paul Rudd as a washed up 90s rocker, but they weren’t all gold. Lisa Rinna–who played Hamlin’s wife on the show and does the same in real life too–was absolutely atrocious. She couldn’t even convincingly act like she was listening to people in the same scene as her like a human does. Blech. Luckily, she’s not in the show for very wrong. To give you an idea of how bad she is, I’d rather Paris Hilton had stuck around for more than her two episodes as a high schooler (snicker) than watch Rinna on the screen. But, hey, no show is perfect and Hamlin wound up murdering his role, so it’s an okay tit for tat.

Another problem with the series is that it doesn’t have a real ending. There’s a last episode and lots of hints throughout the final season that might lead towards Veronica’s future with the FBI, but there’s not a real finale, even with a last episode filled with familiar faces. From what I’ve read, the show never really had a solid foundation with it’s network and didn’t really garner a huge number of viewers. As such, they didn’t know if they’d get renewed for a next season. Turns out they didn’t. Had VMars been one season and ended thusly, I think it could be off putting for future viewings, but with a solid three seasons, it’s less of a negative mark for me.

Which brings me to my last point, I really want to watch Veronica Mars again. Not in the near future, but I want to see how it holds up the second time around when I know all the big reveals and whether the hints and clues of the actual killers/criminals are there from the beginning. This is actually a lot different than most mystery-of-the-week type shows for me. I used to watch CSI all the time, but I don’t have a desire to go back and watch that again. Or even a show I like a lot like Bones. The overarching stuff there tends to be relationship-based, which Veronica definitely has, but those long-reaching season-long mysteries add an extra layer to the series that will probably bring me back to it somewhere in the future. Highly recommended! 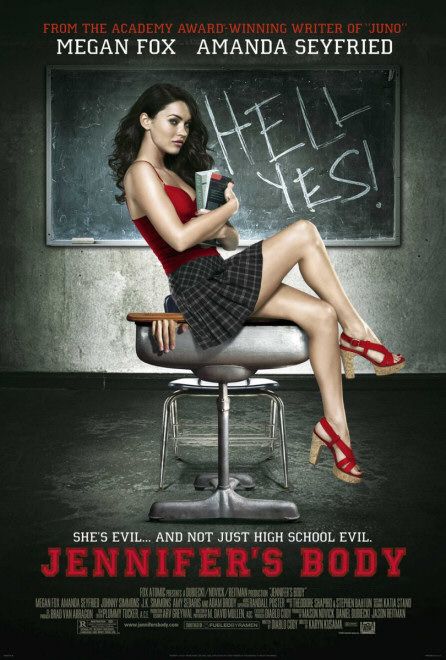 I was pretty excited for Jennifer’s Body, but it had nothing to do with plot or acting or story or the fact that it was written by Juno’s Diablo Cody (I thought Juno was mostly boring and kind of ridiculous when it came to dialogue), but because I’ve always had a thing for Amanda Seyfried and Megan Fox is crazy hot. Oddly enough, it’s the leads’ star power that kind of derails the movie’s sleaze (just to let you guys know ahead of time, there is sex in the movie, but no nudity, which kind of deflates it a bit).

Anyway, the story’s about Fox (Jennifer) getting turned into a succubus by a band with Adam Brody in it. They’re trying to make a sacrifice to become gigantic rock stars, but it turned out that Jennifer wasn’t actually a virgin when they sacrificed her so she turned into the succubus (which kind of eats human life/blood to stay hot and healthy looking). Her best friend Seyfried sticks by her, but turns into the story’s hero as she figures things out.

I can’t really place my finger on it, but this movie just seemed kind of whatever. Maybe it’s because a lot of the gore was shown off camera (what’s the point if you’ve already got an R?). Maybe because of unbelievable/sketchy plot points like Seyfried learning all about succubi from the local library (does Giles run it?) or even the fact that Seyfried and Fox are friends. She says its because they’ve known each other forever, but I just didn’t buy it. Why would the ultra hot and popular Jennifer want to hang out with the nerdy girl? Why would the nerdy girl put up with her abuse? Maybe it’s because I don’t still have friends from when I was very young anymore, but that “well, we’ve known each other forever” thing doesn’t hold water with me once you hit high school.

I will say that there are some good lines. I liked the dialogue in this one way better than Juno because it didn’t seem as in your face or mile a minute or all over the place. I also liked Johnny Simmons as Seyfried’s boyfriend, JK Simmons as a hook handed teacher (I didn’t notice it at first and unfortunately it has NO pay off throughout the film) and Amy Sedaris as Seyfried’s alcoholic (I think) mother. It was cool seeing her especially play outside her normal wheelhouse.

All in all, it wasn’t a terrible movie, but it didn’t really do much for me as a story, which is too bad because there’s such a dearth of original non-remake, non-sequel horror movies coming out. This one clearly got made on the strength of Cody’s name and a solid cast, but I think it’s wobbliness says more about why the movie didn’t do super well than why new horror movies shouldn’t get made. There have got to be better horror scripts floating around just waiting for some new studio looking to make some bucks can put some money behind. Hell, I’ve got a nice little slasher script I bet could be made for short money if anyone’s interested.