Even with all the Halloween Scene posts I’ve been doing this month, I still watch non blood and guys flicks, I just don’t necessarily have the time or energy to do lengthy posts about all of them. So let’s just jump right into it. Let’s just assume there are SPOILERS in all these reviews.

SPECIAL (2006)
I remember hearing about this Michael Rapaport movie about a guy who gains superhero-like powers a while back and thinking it sounded interesting. I dig superhero movies, even when they’re not about known characters and I like Rapaport. Movies like this can be an interesting take on elements of comics and superheros that norms might not have experienced before, but geeks like us have. Special does something like though. See, in Special, Rapaport is a comic book fan who takes part in a pharmaceutical study. He thinks it’s giving him super powers, when really it’s just messing with his mind. To be honest, I turned it off with about 20 minutes left because it was crazy-depressing. Rapaport is such a sad sack lunatic, that he’s hard to watch. For a while you’re not sure whether he really does have powers or not, but by the time I turned it off, after you’re convinced he’s just nuts, I’m not sure how things are supposed to make sense. For instance, when we see him in a chase scene, are we seeing the whole thing through his mind or not? Or the invisible fight? How did these work in real life? I don’t often go in for the “comic book readers as a community” thing, but I do feel like this movie doesn’t help paint comic book fans in any kind of positive light. Eh, moving on.

THE TV SET (2006)
After being disappointed with Special, I wanted to watch something I had heard good things about recently. When I was still at ToyFare, Justin, just told me he watched The TV Set and dug it. See, it’s written and directed by Jake Kasdan who was a director and producer on Freaks & Geeks and is about a producer trying to get his show off the ground only to find his vision being trampled on at every turn thanks to TV executives. David Duchovny is the producer while Ripley (Sigourney Weaver) and Mr. Fantastic (Ioan Gruffudd) are the execs giving him trouble. There’s even a brief appearance from Big Bang Theory’s Simon Helberg (Howard). As a creative person who likes the idea of creating art and just letting it speak for itself, it was hard watching a man’s vision get picked apart and seeing him try to fight for his ideas, but ultimately losing. But unlike with Special, the downer tone didn’t bother me because it reads like a cautionary tale. Not necessarily one that says “don’t get into TV because THIS can happen,” but more along the lines of “hey, heads up, this friggin happens.” The TV Set should be required viewing for anyone looking to get into the TV business and also is kind of a perfect meta bookend for Freaks & Geeks fans. 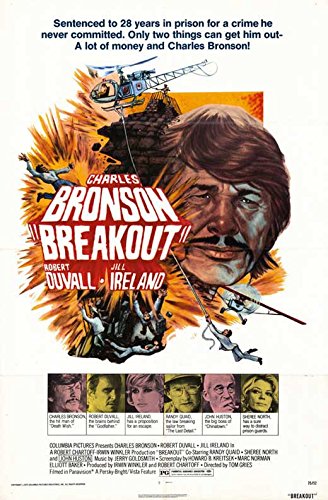 BREAKOUT (1975)
Sometimes I go through the Netflix Instant Watch movies and just look for a certain actor. One of those actors is Charles Bronson, because he’s a badass. One of those movies is Breakout, which gives us the story of a woman trying to get her husband (Robert Duvall) out of a Mexican jail with the help of Bronson and his right hand man Randy Quaid. I’ll be honest, I wasn’t paying a ton of attention so I missed a lot of the intricacies of the plot. See, Bronson cons a bunch of people in order to pull off this prison break, with all kinds of twists and turns that I didn’t get all of. I will say that Bronson is the man, no doubt about that and it was a lot of fun seeing such a young Quaid and I didn’t even recognize Duvall as I’ve probably never seen a movie where he was this young. Anyway, you can do a lot worse when going through movies from the the 70s starring badass mothers.

FAME (1980)
As I’ve talked about before, I’m a big Kevin Smith fan and love listening to his Smodcast podcast. And, Smith is a big fan of Fame, having talking about it on several occasions. That combined with the new movie coming out and the fact that I’ve been hogging the Netflix DVDs with horror junk, I thought it’d be nice to put Fame at the top of the list so we could watching something on Tuesdays when you don’t watch anything else. And man, what a weird movie this is. You’ve got the message of how hard the life of a performer can be (graduates as waiters instead of actors, photographers looking to take advantage of girls, alcohol) mixed with these over-the-top dance sequences that flow out into the streets of New York or completely take over a lunchroom. Now, I know that performing arts kids can be dramatic, I did musicals in high school and knew plenty of them in college too, but this is just nuts. Though, I do appreciate the fact that it’s a practical musical, one in which the singing and dancing can practically take place in real life. In the end I liked the movie and was glad I had heard Smith talk about it so I wasn’t so surprised by all the intense craziness so I was ready for it, but I did find it a little unfocused. I didn’t have a grasp of who our main characters were until the fourth year and I feel like some of the characters were dropped as it did zoom in on our few main characters. Ah well, good stuff. I’m guessing the remake isn’t as hardcore and the new version of the theme song sucks all the energy and life out of the original. Fail. Oh, also, Alan Parker, who directed Fame also directed Pink Floyd’s The Wall, weird right?

AMERICA’S SWEETHEARTS (2001)
Remember how I said I hog the Netflix? I do, it’s a fact. But anytime Em and I try going through NetBox to find something to watch, it takes FOREVER. It’s not that our taste in movies is so wildly different, it’s just that the movies on Instant Watch tend more towards my weird tastes than hers. So, when we came across America’s Sweethearts starring John Cusack, Catherine Zeta-Jones, Julia Roberts and Billy Crystal. The idea is that John and Catherina are big time movie stars who break up and break down, essentially, but they still have a movie premiering that they need to do press for. Like The TV Set, Billy Crystal co-wrote the story based on his experiences in Hollywood, so it’s another kind of insider look and seems to gel with things I’ve read. Crystal plays John’s agent while Julia is Catherine’s sister/assistant. It boils down to a romantic comedy, but it was a good enough one to pass some time. Plus, as you know, I love me some John Cusack.

SIDE OUT (1990)
Are there any other sports movies about volleyball? It seems like the people behind Bring It On and Stick It should be working on one right now, though stay away from Ultimate Frisbee, I’ve got something in the works (ie, I want to eventually make something). Anyway, I had heard about Side Out before somewhere, saw it was available on the NetBox and just decided the hell with it, I’m doing this thing! And, it was just okay. I’d still rather watch Bring It On or Stick It. The story follows C. Thomas Howell as a guy working for a bank or something (I can’t even remember what the actual job is). He’s serving papers to a rad beach dude and ends up playing volleyball with another guy. They get their asses kicked, then train and get pretty good, but the other guy gets hurt and the rad beach dude takes his spot. You’ve absolutely seen this kind of movie before, but this time you get Howell and Courtney Thorne-Smith and even Kathy Ireland for a few seconds. Good enough for a few beers and a watch, but I’m not counting the days till I watch it again.