Let’s see, I’ve blogged about my history with the Scream franchise a bit when revisiting the first and third installments recently, so you can head over there for a little more backstory. Basically, much like the Mission: Impossible franchise, this one was huge when I was growing up and really getting to understand and love movies. You couldn’t be a teenager and avoid them and I was cool with that because they were right in my horror wheelhouse. When I heard that Wes Craven and Kevin Williamson were re-teaming for another sequel, I was curious but not intensely so. I tend not to get as excited about these things as I used to.

That doesn’t mean I don’t enjoy them, though. I actually had a great time watching this movie even if I had to break into three parts and only watch when the kid was sleeping. Craven and Williamson did a great job of using elements from the first film, commenting on them in this one and switching things up. In other words, it’s not a beat for beat remake along the lines of Hangover 2, but instead done in the same spirit and universe as the original.

This time around, the walking catnip for nutjobs Sidney Prescott returns home on a book tour only to find that a new person(s) running around killing people as Ghost Face. In this reality the Stab movies are almost up to double digit sequels and so people are very well versed in horror both real and fictional. Dewey and Gale, now married, are also involved though there’s trouble in their domestic paradise.

Things move along at a good clip with SPOILER a series of false openings starring pairs of stars talking about horror movies, usually before one kills the other. The kills were on par with what I wanted to see in something like this and I thought the cast, including all the younger kids brought in for the new generation, were really fun to watch. I like the kid that was supposed to be the new Randy, Emma Roberts did well and a friend and I both agree that Hayden Panettiere is mesmerizing. I was most surprised by how brutal some of the pre-kill fight scenes were. I didn’t watch a movie for Friday Fisticuffs last week, but I think this movie has plenty of good ones. I’d check and see if one in particular towards the end was on YouTube, but it’s a huge spoiler, so I’ll skip it.

I did have one problem with the film, but it’s not really the movie’s fault. I think I’m losing my taste for fiction that involves people going nuts for stupid reasons. I know it happens, but with the proliferation of procedurals, horror movies and real life news stories, it can be a little difficult to take so many reasons to kill. I had a hard time buying Stu’s motives in the original film and had equally hard time accepting that the killer this time was doing it just to be famous. Again, this stuff happens, people can be broken and damaged and do incredibly awful things to one another for no good reason, but seeing so many of these explanations gets a little tiring. The straw that really broke the camel’s back for me was an episode of Bones I caught recently where the killer did her thing because someone messed with her bushes. Seriously? While these things might make sense in their own little worlds, being a consumer of pop culture and being inundated with them can be a bit taxing.

However, I still liked this film and possibly more than the original. Scream is held up as this huge milestone in horror, the movie that not only made the genre’s films more self aware (whether that’s good or bad remains to be seen and lies in the eye of the beholder) but also gave my generation a horror movie that had a big budget and was also just plain good. On the other hand, I’m not sure how good it is on repeated viewings. I’m the type of person who definitely holds things in esteem because I was familiar with them when I was younger. So, I almost feel a little bad for not liking parts of Scream, but don’t have that connection with the newest one. That sounds like a bad thing, but it’s not. It’s an easier watch, it’s got a cast that’s equal to or better than the original and I think the creators really found a sweet spot in both of their crafts. 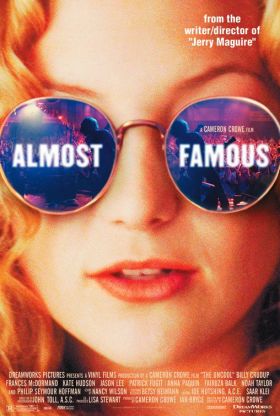 I’m not one of those dudes who had their lives changed by Almost Famous. I was friends with some of those guys in high school and in fact saw this movie over at one of their houses in high school. One friend fell in love with Kate Hudson after seeing the flick and another would incessantly sing Stillwater’s “Fever Dog.” Both were in my band. I dug the movie when I saw it, but it didn’t become a favorite.

If you’re somehow unfamiliar with the movie, it’s basically Cameron Crowe’s fictionalized memoir of touring with various bands in the 70s, but centered around a young kid named William and the fictional band Stillwater. The high schooler gets the attention of Rolling Stone who sends him on tour with the band who he becomes friends with even though his mentor Lester Bangs (Philip Seymour Hoffman) warns him against it and also falls for groupie–sorry “Band Aid”–Penny Lane, played by Hudson. It’s basically the story of a kid learning to go from fan to pro in an industry that’s showing him all its warts, no matter how much they wound him.

I actually had more fun spotting the supporting actors in the flick than watching it. I think that’s because I’ve seen and even lived this story a bit myself. Having been a comic book fan who worked in the thick of the comic book world at Wizard, I can really relate to what William goes through (minus the groupies) but comparing a film, even a great one, to my real life, the film’s not going to hold up. I get that it’s great and I love all the rock and roll stuff, because I’m a huge fan of music from that era, but it just doesn’t vibrate inside of me like it might have when I was younger.

Anyway, back to that star watching, here’s the ones I saw. You’ve got Jimmy Fallon playing the manager’s manager. I can’t remember if I knew who he was when the movie first played. The gone-too-soon Mitch Hedberg sits in on a manager poker game! Anna Paquin and Fairuza Balk (The Craft) play groupies. Jay Baruchel is a Led Zeppelin super-fan and even Nick Swardson has a moment as a wild David Bowie fan. Heck even Modern Family‘s Eric Stonestreet pops up as a hotel worker. I’m sure there’s plenty I missed. Plus, of course, one of my favorites Jason Lee plays an important part. It’s funny how similar the character is to Banky from Chasing Amy, but the guy they got to play the singing voice sounds embarrassingly like someone else. Oh, this was also the first movie I saw Zooey Deschanel in and didn’t even realize it!

I think had I bought the movie after I saw it and gave it a few more spins, I would have a lot closer relationship to it, but as it stands, I can appreciate it without falling in love with it. Though, I do adore the “Tiny Dancer” bit. Moments like that in real life are amazing and should be enjoyed both in the moment and later in life. I have incredibly fond ones of singing songs with my buddies back home and even the other week when the missus and I wound up singing “Summer Loving” from Grease, even though she had to sing most of the dude parts because I only know about half the words.

You guys, I’ve been waiting to see Trick ‘r Treat for what seems like three years now. Back in the day when Rickey was the Hollywood editor at Wizard I remember him excitedly telling me about TrT, saying it was kind of like Nashville or Go with several stories intersecting in unexpected ways, but with horror. It’s a concept I’d never heard of before. But then there were all kinds of problems. It was supposed to be in theaters in 2007 (as you can see from the poster) and it wasn’t. Then it was supposedly pushed back to come out in theaters in 2008 and it didn’t. Well, it finally came out today and it was worth the wait!

Not only does the film follow several groups of characters, it also jumps around in time, starting with the end of the night and hopping around from there. I really don’t want to drop any specific spoilers, but I will say that I appreciate the different kinds of stories you get here. There’s a monster, a supernatural slasher, ghosts and ghouls and regular old killers. For horror fans who like their stories completely explained by the end of the film, this isn’t really the movie for you. And I really like that aspect of it. Some things are explained, like the image of the kids on the bus in the ultra creepy costumes, but others are completely unexplained. Unless I missed something, which is entirely possible.

There’s a lot going on in this movie and I would gladly give it another watch in the near future or even add it to my collection, but I’d feel kinda bad sitting on this Netflix DVD when I know so many other fans out there are looking to check it out. Two more things before I leave you to watch this flick yourself. One, Sam, the little burlapped dude in the poster above, is probably my favorite slasher of the past 10 years. And, two, be warned, a LOT of kids get killed in this movie. I’m not talking about 24-year-old teenagers, actual kids around 14 years old and younger. I wasn’t really bothered by it, but was surprised. I wonder if that had something to do with the movie getting moved back. Hopefully, it will do really REALLY well on DVD and we might get another horror movie out of Michael Dougherty.