As you may know from my various writings about their Paperbacks From Hell series, I have become an avid follower of Valancourt Publishing. So, a few months back when I saw that they had started a new imprint called Monster, She Wrote, I got very excited. A series of books with consistent cover art spotlighting female horror and weird fiction? I was in! But, I was having trouble finding the non-fiction book that started it all! What happened and how did it work out?

END_OF_DOCUMENT_TOKEN_TO_BE_REPLACED 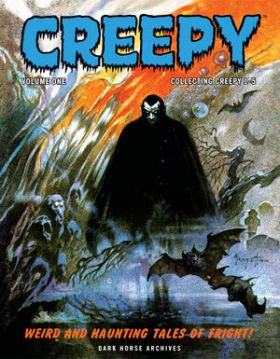 Back when I was still at ToyFare, I got a pretty epic box of books including the first two volumes of Dark Horse’s Creepy Archives reprints. I’m a bit embarrassed to say that they’ve been sitting in my closet pretty much ever since. I might have pulled volume one out a few times, but never really dove in properly until this year. Not only was I excited to get into these stories as part of the Ambitious Halloween Reading List, but I was also able to make some money off of it by working on a fun list over at Topless Robot called The 10 Best Stores from the Early Days of Creepy.

I talked about some of the history over there, but basically, back in the mid 60s Warren Publishing figuratively picked up the mantle of EC Comics and rekindled quality horror anthology comics with books like Creepy, Eerie and Vampirella. Many of the old school EC guys came over and did art while most of the stories in this volume were written by editor Archie Goodwin. After reading a few EC collections, I wasn’t quite sure what to think of Creepy, but I’m glad to say I had a wonderful time reading these stories.

The big problem I had with the Tales From The Crypt and Weird Science books I’ve read is that, while the art is often amazing, the stories are hokey, boring or built in such a way that the twist ending is just so obvious it’s not even entertaining. I was worried that the Creepy tales would be along those lines and was delighted to find that that wasn’t the case. 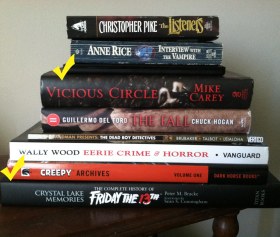 In fact, this book had some incredibly unique stories that I’ve never seen anywhere else which is really saying something. In that regard, these stories reminded me of The Twilight Zone because there was such a variety of stories being told, which is all the more impressive when you think that one guy was writing most of them.

But, the real eye-opening aspect of this book was introducing me to some classic comic book artists that I’m not very familiar with. Classic guys like Al Williamson, Jack Davis, Angelo Torres and Joe Orlando came in ready to rock as did Frank Frazetta whose gnarly style fits perfectly with those vets (not that he was any rookie by this point, but you get my meaning). The one artist that really blew me away, though, was Gray Morrow. His work has such depth and quality to it that you almost wonder if these were more modern stories slid into these others from the mid 60s. I’m so intrigued by him that I want to check out books like Orion and Space: 1999, which both happen to be on my Amazon Wish List if anyone wants to get me a little something.

Anyway, as you can tell, I’m pretty darn far away from reviewing these supposedly Halloween-themed books in a timely fashion, but I’m enjoying this mix of books still and will continue on until I find myself distracted by something else. I’m partway through the Wally Wood book and about a third of the way through The Fall right now, so maybe I’ll actually finish this one out before the end of the year (but probably not). 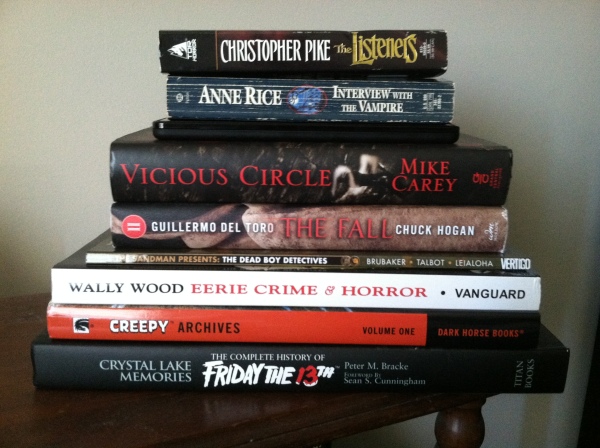 I knew I hadn’t been doing very well on the most recent Ambitious Reading List, but then I checked the blog and realized I started it back in November of last year and have only since read three and a half of the books. So, with Halloween in the offing, I figured it was about time to toss that one aside and start a brand new one, this time with more of a focus.

So, I now have nine books that I’m trying to read this month. It probably won’t happen because I’m a damn slow reader, but why not give it a shot, right? Here’s the basic rundown.

The Listeners by Christopher Pike. I was a huge fan of Pike’s young adult books as a kid and figured I’d give one of his adult titles a read. I actually stumbled upon this used book store purchase while looking for the next book in the pile, but it felt appropriate to check out this month.

Interview With A Vampire by Anne Rice. This is one of two re-reads on the pile this time around. I can’t remember the first time I read this book, probably late grade school or high school, but I’m curious to get back to it and then give the adaptation another watch.

The Shining by Stephen King. You might not be able to see my Kindle on the pile, but I assure you it’s there. I read this book in high school then lent it to a guy I worked with at the bagel shop when I was 16. He got fired and I never saw him again. So, it’s been quite a while since I’ve given it a read. I will follow this one up by watching all of Kubrick’s film version FOR THE FIRST TIME! By the way, it’s only $4 for Kindle right now!

Vicious Circle by Mike Carey. This is the second Felix Castor novel from Carey. I used to interview him all the time for Wizard and really enjoyed the first installment The Devil You Know. The book explores a world where everyone knows ghosts exist and have to deal with them on a regular basis.

The Fall by Guillermo del Toro and Chuck Hogan. Since reading The Strain, I’ve actually been able to get my hands on the other two books in the series at Barnes & Noble for less than cover price of one book! I’m really curious to see where this story goes and hope to read all three installments before the TV show premieres.

The Dead Boy Detectives by Ed Brubaker and Bryan Talbot. I read this Sandman spinoff series once before and am a big fan of Brubaker’s. While looking at my trade shelf, it seemed like a good fit for the theme.

Eerie Crime & Horror by Wally Wood. I fell in love with Wally Wood’s artwork after reading Weird Science Volume 2 and have been on the hunt for more of his work since then. I picked this book up earlier this year and figured now’s as good a time as any to finally read it (or possibly just scan it for the pretty pictures depending on how good the writing is).

Creepy Archives Volume 1. Featuring stories by some of the greatest artists in the comics business, I’ve been sitting on this book for years. It’s about darn time I finally sit down and have some fun with it.

Crystal Lake Memories: The Complete History Of Friday The 13th by Peter M. Bracke. No kidding, I have a whole shelf filled with coffee table books I’ve never read. This oral history of one of the all-time greatest slasher franchises is one of them and seemed like a good non-fiction entry in the list.

Alright gang, so here goes. Hopefully this stack o’ books will get read more efficiently than the other. I’m already working on two of them right now, so I’m thinking it won’t be too long before the first review goes up.