No one’s more surprised than me that I’m writing a post about not one, but two Archie books I love, but that just goes to show that I was previously being close-minded about this company AND that they’re pretty awesome right now. END_OF_DOCUMENT_TOKEN_TO_BE_REPLACED

So many trades, so little time so let’s jump right in! A friend of mine suggested I check out Tokyo Ghost, which didn’t take too much pushing because I love Sean Murphy’s artwork in books like The Wake, Punk Rock Jesus and Joe the Barbarian and I’ve always thought that Rick Remender’s stories work better in worlds that he fully creates and that’s exactly what you get with Ghost. END_OF_DOCUMENT_TOKEN_TO_BE_REPLACED 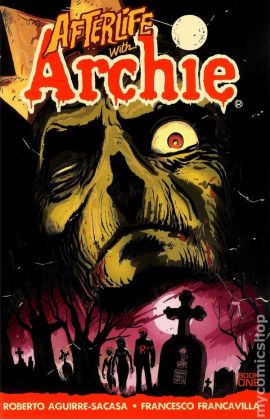 Afterlife With Archie: Escape from Riverdale

Between work and the impending move, I haven’t had a lot of time to sit down and read comics. However, I inexplicably requested a pile of books from the library which came in much quicker than expected. One of them is Afterlife With Archie: Escape From Riverdale, a book I’d heard a lot of interesting things about. So, with the little bit of free time I had, I banged this one out and had a great time doing it.

There’s basically two ways to dig into this book. The first is, how does it work as a horror/zombie story? And the second is, how does it work as an Archie story? I think the answer to both questions is “pretty great,” though I think the main reason it got so much love is because of the latter instead of the former. That might sound like a dig, but it’s not. Actually, it’s the opposite because I think that it took a lot of guts for Archie Comics to let Aguirre-Sacasa take their characters into such adult territory. This isn’t the cartoony version of Archie you might have seen at the grocery store, but one who knows all the ins and outs of Veronica’s house because he wanted to make out with her. There’s also the matter of zombies. Lots and lots of zombies.

So, the story kicks off after Sabrina helps bring Jughead’s dog back to life with some spell-casting. That doens’t work out quite so well, leading Hot Dog to bite his owner, turn him into a zombie and kick off a nasty bit of carnage. Archie and the gang all happen to be at a costume dance at school when this goes down and the rest of the book finds them trying to figure out ways to survive as the world comes crumbling down around them.

I’ve read and seen a lot of zombie material in my time and I was impressed with where this particular story went. I liked the simple origins of the undead in the book and the idea of the looming threat hitting such a small town. Aguirre-Sacasa also throws in some nice touches involving flashbacks and quick asides to other characters that I thought added a lot to this story. It could have easily focused just on Archie, Betty and Veronica, but instead this feels like a whole world of characters to worry about.

And worry I did, even though I’m far from familiar with these characters. Sure, I read a few Archie Digests here and there as a kid and know about some of the newer characters like Kevin Keller from reading the internet, but Aguirre-Sacasa did a great job of getting me to care about these characters while also poking fun at a few of the tropes like the never-ending battle within Archie when it comes to choosing between Betty and Veronica.

All of the story elements work really well together, but one of the main reasons this book succeeds so well is that Francavilla doesn’t hold back when it comes to bringing the scary tones. The zombies look awesomely gross and, while you don’t necessarily see the full gory details every time, there’s plenty there to squirm over. His use of blacks, oranges, shadows and darkness makes this a moody, creepy work that fits right in with the other book of his I read this year, Batman: The Black Mirror (speaking of which, Mr. Lodge and Jim Gordon look like twins, right?).

All of these pieces come together to tell a really fun, sometimes scary story that would work without these characters, but is a lot more fun with them involved. I will also say that, seeing a company like Archie go down these different avenues, makes me want to dig a little deeper into the other books they’re putting out. Afterlife With Archie continued on and there’s also a Sabrina series I want to check out.