I’m a big fan of the Incredible Hercules series, which I’ve read most of in trade form. I actually haven’t read the few trades that lead up to Chaos War, a kind of event that saw the return of several dead heroes in a few other minis and one-shots I also haven’t read. Anyway, the main story here follows The Chaos King as he intends to lay waste to all of reality with only the combined forces of the recently returned and super duper powerful Hercules standin in his way. Herc recruits Thor, Galactus, Silver Surfer, Sersi of the Eternals, Venus from Agents of Atlas, Daimon Hellstrom and, of course, Herc’s number one pal Amadeus Cho to help him. Why this particular hodge podge of heroes? Well, the rest of the Marvel U doesn’t believe our hero when he says the world is going to end thanks to his party boy history.

In the process of trying to save all of reality, our heroes have to face off against an army of monsters and evil gods as well as the reanimated corpses of some of their former friends and foes. Like most event comics, this one has high stakes that you never really believe in because, well, the Marvel Universe isn’t going to cease existing in a comic starring Hercules. Still, I think Pak and Van Lente did a good job of making it feel like things could get bad.

Anyway, there’s lots of fighting and planning, winning and losing in the story. I won’t go into the details because, let’s face it, when dealing with a big even like this from Marvel or DC, it’s the details that make it interesting. I do think Chaos War works better if you had been reading Incredible Hercules going into it, otherwise, I’m not sure if there’s a lot besides basic superhero stuff to grab onto. However, for Hercules fans, we really get to see our guy do his thing, do it well and save existence, so that’s pretty cool. Did anyone out there read the tie-ins? I think they’re all collected in a few trades and would be interested in checking them out if you guys think it’d be worthwhile. 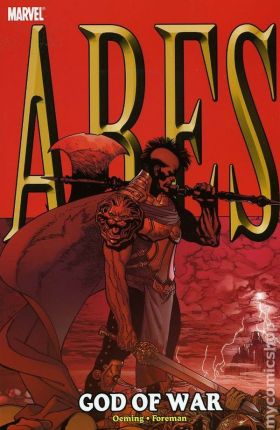 Reading Chaos War brought me back to one of my favorite Marvel minis of the past few years: Ares by Mike Avon Oeming and Travel Foreman. There was this awesome time between 2005 and 2006 when the House of Ideas dropped a bunch of rad minis like this one, Union Jack, Agents of Atlas and Doctor Strange: The Oath. I went into this five issue series knowing absolutely nothing about the Marvel version of the Greek god of war, but I came away thinking he was a pretty gigantic bad ass. Marvel used this story as a jumping off point for bringing Ares into the Avengers and doing…things with him that I didn’t think fit with the character established in this book, but what do I know? His son also eventually became an important part of Secret Warriors.

The miniseries catches up with Ares, who ditched the world of gods because his fellow immortals had a pretty low opinion of him, yet still used him when they needed him to wage war. He now has a son named Alex who has no idea who his father really is. Things fall apart after Ares refuses to help the gods who are being assaulted by Mikaboshi an evil god from the east (and later known as the Chaos King in Chaos War). In their infinite wisdom, the Greek pantheon  decide to kidnap Alex as a way of motivating the wayward god of war. From there it’s an action-packed rager as Ares tears through enemies to get his son back.

Reading Ares for the second time this many years later was an interesting experience. First off, now that I’m a dad, I can relate to the fatherly aspect of the story much better than I could last time. I think it’s an easy story type to use because of its primal nature, but it works here. I also found it interesting because this is basically a mythical version of Taken or Commando. This got me thinking about how cool it would be if Marvel Studios simply adapted this comic into a movie. Just make it a straight ahead action flick with monsters and whatnot and you’d have a hit on your hands. Guaranteed.

In other words, I would actually pay money to see a movie where Ares lights himself on fire, has Hercules throw him into an oncoming army and murders everything in sight. That would be amazing. Anyway, if you like the idea of the sentence you just read, do yourself a favor and pick this trade up, I don’t think you’ll be disappointed, especially if you dug Chaos War and want to dig a little deeper into that story’s history.