A few years back, my wife and I decided to get rid of cable. With that, we signed up for Hulu Live or whatever it’s called so we could keep watching Jeopardy and I could enjoy football and basketball. So, we’ve got that streaming service as well as Amazon Video and Netflix. And yet, we still find ourselves watching quite a bit of traditional television. These are the weekly shows we do our best to keep up with!

END_OF_DOCUMENT_TOKEN_TO_BE_REPLACED

Well gang, it’s summer, so you know what that means: there’s not much to watch on TV if you don’t like reality shows. I was thinking about doing one of those “What We’re Watching” posts I do from time to time, but since it’s 95% “non-scripted” shows, I figured a Reality Rundown would make more sense. There were a few weeks in the beginning of the warm season there where nothing of interest was on, but thankfully a swath of shows we dig have premiered to help fill our evenings.

One such program is USA’s Summer Camp. I stumbled upon this one a few weeks back as it was debuting, which seemed like auspicious timing. Also, for a guy whose been fascinated by camp going back to the days of watching Salute Your Shorts and Camp Nowhere (there’s even a Camp Movie category over there on the right) this was a pretty easy sell. The idea here is that a large group of adults are taken to a camp and broken up into teams based on sex. Every episode each team choses a captain who will pick two of their own players to go up for elimination should they lose the daily game (like this week’s guess-whoe’s-kissing-you contest). Those two people then go to the other team, plead their case and either get to go or stay.

What I dig about this show is that it’s just plain goofy fun. The contestants aren’t overly scummy — something I’ve found with a lot of other reality shows of this nature — so you can enjoy most of them. It even seems like the producers were going for “likable” instead of “dramatic” when putting the group together, which is a nice change. Even though it’s not similar thematically, the show kind of reminds me of Beauty And The Geek which I remember enjoying for the first season. At the end of the day, Summer Camp‘s like your third light beer on a hot day, it serves its purpose, but you’re not going to remember the details by the next one. 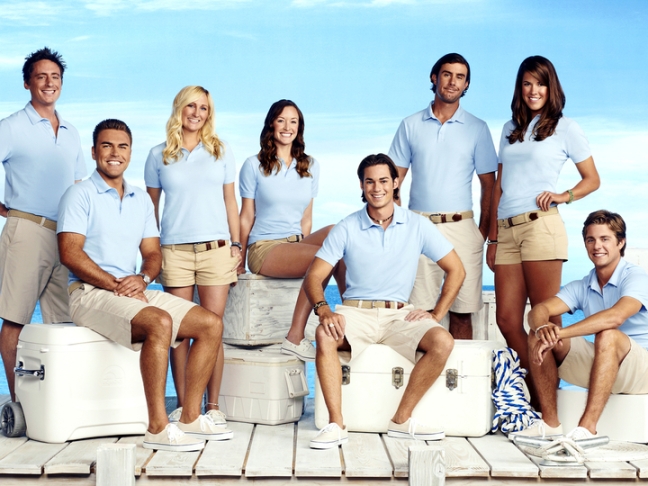 I don’t know about you guys, but Bravo seems to go in waves of putting out shows I actually enjoy. The beach was pretty dry there for a while and then they came rushing back hard with a group of shows we like Real Housewives Of New Jersey, Million Dollar Listings New York, Interior Therapy With Jeff Lewis and newcomer Below Deck.

Deck follows the adventures of a charter yacht crew as they take on new guests every week. Each employee has varying levels of experience in the field, so you get a mix of the basic job reality show tropes where some people are just doing their job really well and others are dealing with all kinds of new experiences. For the most part, this is a pretty interesting group of characters, many of whom have surprising back stories that keep getting revealed as the series progresses. I will say, though, that the last episode got on my nerves a bit with how much some of the employees complained about the guests. Granted, the clients were super douche-bags, but you’re working a luxury yacht, you should pretty much expect daily piles of BS from entitled weirdos who think the world revolves around them. Of course, this inability to cope has lead to tons of drama that might even lead to a crew member getting thrown overboard next episode.

Two years ago I watched a documentary called Catfish about a guy named Nev discovering that the young lady he’d been chatting with online was actually a married woman with kids. In my review of that movie, I actually said, “To me, the movie felt more like a show that would be on the Learning Channel or Discovery about weirdos who lie on the internet. ” I must be psychic because now it’s exactly that, but on MTV.

Catfish: The TV Series finds Nev, his pal Max and their film crew traveling around the country helping people find out if the folks they’ve been talking to on the internet are who they say they are. We watched most of this show’s first season, but more casually than now. These days I get excited every time a new episode is on. I like how this show makes delusional people face reality. That’s not always easy for them, but I think it’s important to not live in a completely fictional world of your own creation. The craziest part to me is when the people asking for help are pretty sure they’re being lied to and still go on with their online significant other. Heck, the guy on this week’s episode was living with his girlfriend while talking to his longtime online girl! It’s just crazy.

I will say that Catfish is right on the edge of the kinds of reality shows I can watch. “Trying to make people see through their delusions” is a subgenre that also includes things like Hoarders and Intervention, which are just too real, sad and unnerving for me to watch. I know that love can be just as addicting as anything else and that betrayal is a very difficult feeling to deal with, but it seems a bit softened by the show itself, something I attribute to Max and Nev who seem to be getting more and more skeptical with each episode. Good for them because we’re getting close to the point where folks are going to be scamming them just to get on TV.