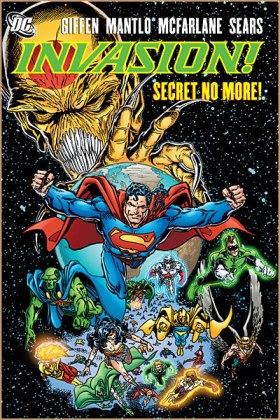 I can’t tell you how long I’ve had the (as far as I know) most recent printing of Invasion sitting in my to-read box. I mean, I probably could. I got it from the comp boxes back when it came out and I was still working at Wizard, so that gives you some idea. Anyway, I tried reading it at one point a few years back, put it down for just a little too long and forgot what I’d read, so it went back in the box. That’s partially because this 256 page trade collects only three issues. Can you imagine DC or Marvel trying to pull that now? Only three months of an event? Ha! Putting out the story in three 88 page installments? You’re out of your mind! Having each book be a specific chapter that’s related to the previous, but mostly goes in a different direction? Get out of here kid, you’re bothering me.

I’ll admit, all those elements that make this 1988 event so different than the ones I’m used to (I wasn’t reading comics when all this went down, but I’ve read many of the tie-ins over the years), did throw me a bit. The first issue is completely from the villains’ perspective. We get a lot of the details about the invading Dominators and their allies. You’re not even on Earth until the very end and only see a few heroes at all. The second issue deals with the invasion and shows the heroes successfully deflecting it. Wait, what happens in the third issue then? Well, one Dominator drops a bomb on Earth that mitigates the metagene that gives many heroes and villains their powers, so an unaffected group (mostly those who got powers from supernatural, extraterrestrial or scientific means) go on a mission to find the cure. It’s a pretty big turn, but it winds up making sense and adding an interesting extra layer to the story.

Right before reading this book I read the four existing trades of the most recent R.E.B.E.L.S. series, which I really enjoyed (the only reason I’m not reviewing them is because the last arc isn’t collected and I want to write about the whole thing). I found it interesting how heavily writer Tony Bedard mined Invasion for source material. Just about every alien in that book was in Invasion, though I’m sure some or most of them go back further than that. It’s interesting how you can stumble upon two series’ separated by decades and find so many touchstones between them. The same goes for The Great Darkness Saga too, but I’ll get to that in a paragraph.

So, the real question is whether I would recommend you my reader picking up Invasion. That’s a tough one. Like I said, it was interesting reading an event done differently. There’s plenty of allusions to the tie-ins, but they don’t seem as necessary. One thing that this book did that something like Blackest Night did not is explaining the tie-ins in a panel or two when needed. There’s also some pretty rad McFarlane and Sears artwork in these pages. It’s fun to see someone like McFarlane so known for a particular group of characters drawing other ones. I also like seeing Sears’ art recolored as a fan of his Justice League work. On the other hand, it’s kind of a tricky story to dig into because so much is going on and so many characters pop in and out. I don’t think someone who isn’t a die hard pre-DC 52 fan would have as good or as easy of a time reading this collection. At the end of the day, I’d suggest checking it out on a site like Sequential Swap where you can make a trade for it instead of dropping down the $25 cover price. I always feel better about recommending a book when I know people can get it on the cheap. 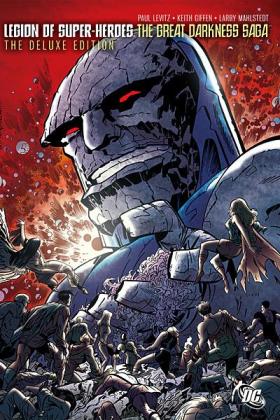 The Great Darkness Saga is one of those stories that you hear a lot about how great it is from older comic readers or at least I did at Wizard. I think I tried reading one of the earlier softcover trade versions at some point but really didn’t know what was going on. This deluxe edition collects a whole year’s worth of stories leading up to, including and following the Great Darkness Saga, a story that had a mysterious bad guy sending his shadowy henchmen across the galaxy to grab a few things so he can achieve his nefarious goal.

The funny thing about this story is that it’s one of the most spoiled ones in history. I mean, you spend 12 issues trying to figure out who the bad guy is — in theory — but he’s right there on the cover and has been on every other collected edition cover I’ve seen. It’s not like people even talk about it that much, that Darkseid is the bad guy, just that it’s right there front and center. The problem with that, of course, is that it kind of undercuts the whole point of the story which is who this guy is. I thought that was kind of lame. I mean, I expect as a longtime comic fan not to go into every store completely clean and innocent, but this is a little ridiculous, isn’t it?

The huge spoiler is but one thing working against this book. The other is how infamously difficult it is to collect Legion comics from the Levitz/Giffen era. Unlike today, the stories weren’t told in six issue arcs, instead each character got the spotlight at different times and things moved along more like a soap opera than today’s comics. I actually prefer this method of comic storytelling, but it definitely poses a problem when collecting said issues. The first issue in this collection doesn’t necessarily have anything to do with Darkseid, but it does have to do with characters who will pop up to fight him and his people later on. One of the reasons I didn’t read the previous version I saw was because I had no idea what was going on or who the characters were. By including so many additional issues, this book gives you a much better idea of who the Legionnaires are and what they’re up to even if you’re not exactly coming in on the ground floor. Since first trying TGDS, I’ve read the Eye For An Eye and The More Things Change collections from this era as well as a few other Legion trades from different eras, so I was much more well-versed in the characters and what was going on.

Still, I think if you’re open and quick on the uptake, this book works really well for readers completely new to the Legion concept. I was going to suggest letting a friend borrow it, but removing the slip cover and telling them not to look at the covers in the back to give them a more pure reading experience, but then I looked at the book’s cover and it has a silver embossed Darkseid on it. Oi.