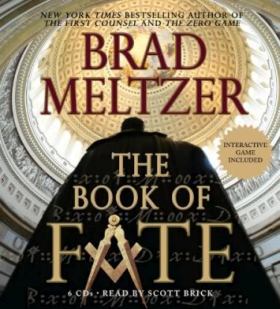 I’ve talked about how much I dig Brad Meltzer’s books before (The Zero Game, Book of Lies and The Millionaires). He has a great ability to write tight thrillers that never fail to keep my interest. Most of his books that I’ve read involve a regular guy stumbling onto something big that he has to run away from. Said hero tends to go on the run in order to clear their name, usually aided by a friend, family member or confidant. It might seem a little formulaic, but Meltzer also does a boatload of research and puts that into his books that give all kinds of extra information, something fans of his TV series Decoded will not be surprised by.

The Book of Fate is about a presidential aid named Wes who was wounded in an assassination attempt on the president’s life. Because of a misunderstood picture taken during the incident, the prez lost favor with the people and did not get re-elected. The meat of the story finds Wes working for the former president eight years later when it just so happens that a guy who seemed to die during the assassination attempt is actually alive. This gets Wes and his friends digging into what really happened. They stumble onto a powerful organization called The Three and have to deal with the crazy man who shot him, Nico.

As with his other books, this one kept me interested and guessing as to what was really going on the whole time which made it a great audiobook to listen to on our almost 12 hour drive home from Michigan to New York on Monday. I do have one minor complaint though. At the beginning of the book, there’s a note written by Meltzer that reader Scott Brick reads that talks about the Masons. He offers historical information about the group, saying that he doesn’t necessarily believe the conspiracy theories about the group, but does note it’s interesting all the important and powerful people who joined. This is the kind of thing I tend to skip when reading a book, but you don’t really have as much choice when listening to an audiobook. The problem I had with this is that it primed my brain to constantly think of the story in terms of the Masons. But, as it turns out, they’re not even a part of the book, but instead stories The Three tell Nico to get him on their side. Basically, “These evil men built the country as a way to open the gates of hell, so I must kill them.” Maybe it was put in there to do exactly that, but I didn’t like it. I usually just jump in and read a book, I don’t like too much advanced information.

But, that’s a small complaint. Like I said, this one moves along at a pretty breakneck pace making for a great listen. Brick once again did a killer job on the reading just as he did on The Millionaires and the Nelson DeMille books we’ve listened to. On a bit of a funny side note, I let my dad borrow The Millionaires. He really liked it so when I saw The Book of Fate discs on sale for cheap on Amazon, I recommended he check it out. I was actually thinking of The Book of Lies, though, so I told him it had all this stuff about Superman and was partially set in Cleveland. When I saw him on vacation he was like, “I really liked that book, but it didn’t have anything about Cleveland in it.” Whoops! It worked out, though, because I hadn’t read Fate and it wound up being the perfect driving audio for our trip home.