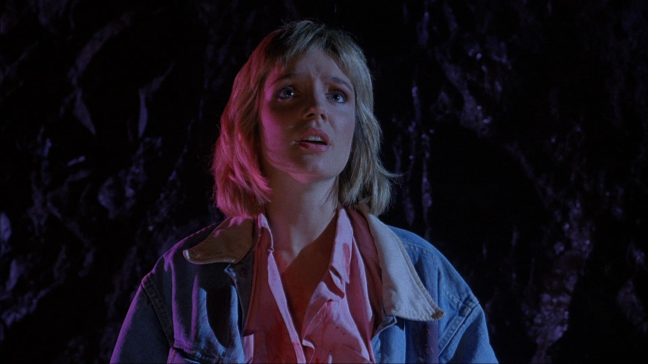 Earlier this week, I wrote about how reading the excellent Paperbacks From Hell lead me to the delightfully gnarly Valancourt reprint of The Nest by Gregory A. McDonald (actually Eli Cantor). During the time it took me to actually read the book, I stumbled across the fact that a film was made of the 1980 book in 1988. I was admittedly skeptical as the novel features large, but not movie-humongous insects systematically attacking, killing and stripping humans for parts. I haven’t seen a lot of killer bug films, but the ones I had usually relied on forced perspective to make the diminutive members of Club Earth gigantic. How would director Terence H. Winkless deal with that in a film adaptation?

END_OF_DOCUMENT_TOKEN_TO_BE_REPLACED

Hi my name’s TJ and I’m a Real World addict. Even though the current season is pretty repulsive I keep coming back for more. In an effort to remind myself why I like the show so much, and to cut my gigantic to-read pile down by at least one book, I decided to finally read The Real World: The Ultimate Insider’s Guide by James Solomon. The book takes a look at the first six seasons of the show, interviewing all but three or four of the cast members and giving them two to three pages to talk about their experiences during and after the show.

The book actually starts off with the then-most recent cast Boston which aired in 1997 and was, for the record, one of my all time favorite seasons (along with 96’s Miami). This is the one that we get the most in-depth information on. The interviews are a lot longer and each aspect of the season gets its own section like their vacation and their job with the kids after school. My favorite part of this section is a chapter called “A Day in the Life of Real World-Boston” which not only takes us behind the scenes of what the directors do to keep track of the cast members, but also how the raw footage is turned into half hour episodes (they were shorter back then). I’ve been a fan of Real World for a while and have absorbed as much as I have about the show, but I don’t remember seeing much behind-the-scenes type features about how the show is actually made. Did you know that the cast members have to call the producers and let them know everywhere they’re going? That they wear pagers (not sure if this is still the case or if it’s cell phones now) and have to respond to the producers whenever they call within 15 minutes? That their wireless mics can be used to track them down by techs in vans listening in? It’s nuts!

From there the book is still good, but gets less and less in-depth. But, that’s only to be expected. Frankly, each season could have an entire book of this size dedicated to it, heck Pedro & Me just looks at one aspect of the show and some of the people involved. I’ll give you a bit more of a rundown of how the latter seasons are handled. It starts off with a two page spread running down trivia about the place the season was set, things like movies set in that city and music from there. Then you get a cast photo with bio info like birthdate and what they’re up to now. 2-4 pages about the house come next with pull quotes from the housemates and design tips. Before the pages focused on the cast members you get a nonsensical chart of the cast members with annoying rhyming notes about what they did on the show, who they fought with and whatnot. After the interviews, you get a weird trivia section that I’m embarrassed to say I did pretty well on.

Okay, one thing you need to know going into this book: most of the photos look incredibly bad. You’d think with MTV putting this book together (it’s published by their book division, which also produced The Perks Of Being A Wallflower) they’d have access to some really solid, high resolution photos. Nope. Some of them look alright, but for the most part, the photos look like screen captures from video tapes that look to have been dropped on the floor a few times. They’re grainy and bad. This is a pet peeve of mine because my job in the Wizard research department revolved around image sizes and making sure things looked good in print. This book does not look good in print. Aside from the pictures being bad, you should also note that the book has a very 90s magazine feel to it with tons of little pop outs, thick colorful lines around things and all kinds of icons. It’s not bad, it just might seem dated. I liked the design though. It fits very well with what you’re reading about.

My one other complaint about the book is that it assumes you’ve just watched all these seasons. Well, even being a big RW fan, my memory’s pretty crappy and I can’t remember back to 1992. Heck, I’m not even sure if I saw the seasons prior to Miami all the way through as I wasn’t supposed to watch MTV as a youngin). There’s a whole thing about Ranch dressing and the London cast, but they never explain what the hell they’re actually talking about. Maybe if the rhyming nonsense in the beginning of each chapter was a little more concise this wouldn’t be a problem.

So there you have it. This book is only for Real World fans or people who are interested in finding out what the deal with the earliest seasons was. It was a fun trip down memory lane and really made me want to 1. make a documentary about the Real World’s long history 2. look these people up online and see what they’re up to 3. get my Real World All Stars spin off off the ground and 4. watch the previous seasons. Why is it that the very first season (which I just added to my Netflix queue) and Vegas are the only ones on DVD? Heck, I don’t even need them on DVD, toss them up on Netflix instant or on your website MTV. I can go back and watch every episode from 2006’s Key West season up to last week’s episodes on MTV.com, would it be so hard to convert those old seasons to play online? Doesn’t seem like it. Heck, teach me how to do it and I’ll freelance that shit for you MTV. I’ll also work on the next volume of this book if Solomon’s not available.