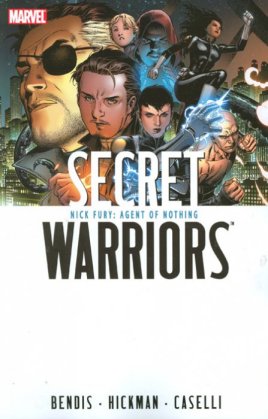 SECRET WARRIORS VOLUME 1 (Marvel) Written by Brian Bendis and Jonathan Hickman, drawn by Stefano Caselli Collects Dark Reign: New Nation excerpts, Secret Warriors #1-6 One of my all-time favorite comic book characters is Nick Fury. I love the old Steranko stuff and pretty much anything else the guy appears in. Unfortunately after the sub-par Secret War miniseries, my boy disappeared for a while, but eventually popped back up in Secret Invasion and got his own book again during Dark Reign. I think I’ve gone on record as saying that I haven’t been a big fan of the huge sweeping events that have plagued Marvel from Civil War on. It’s so hard to pick up a trade and try to figure out when the hell it fits in with all that nonsense. It takes away the classicness of some really good stories and lead to even more bad stories. Lucky, Secret Warriors was a damn good book, though I’m not a big fan of the basis behind the book itself: Hydra has been running S.H.I.E.L.D. from the beginning. I’m getting sick of stories that pull that “Everything you knew was a lie!” comics. But, that’s not enough to keep me away, hell they did something similar to this story back in Nick Fury Vs. S.H.I.E.L.D. Fury’s in this bad boy being all cool and secretive, training a group of young super powered people related to familiar heroes and villains, but also putting an army together made up of former S.H.I.E.L.D. guys, so you get a great mix of storylines from the missions to the relationships of the characters. I read this book pretty regularly when I was still at Wizard and even a little while after, but left off at some point. I always felt like this book should have been more important in the eyes of the greater Marvel Universe, but as far as I know it never turned out to be that. Ah well, I still dug the story and Caselli’s art is absolutely amazing. It’s stylized and a little cartoony, but still has an edge that integrates the multiple elements I mentioned. I’d check out anything this guy draws. For now, I’m keeping this book in my collection because it’s Fury and I dig the story, but I might get rid of it if the later volumes turn out to suck. We shall see. 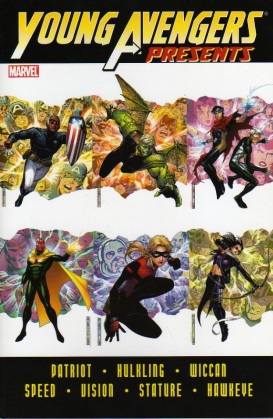 YOUNG AVENGERS PRESENTS (Marvel) Written by Ed Brubaker, Brian Reed, Roberto Aguirre-Sacasa, Paul Cornell, Kevin Grevioux and Matt Fraction. Drawn by Paco Medina, Harvey Talibao, Alina Urusov, Mark Brooks, Mitch Breitweiser and Alan Davis. Collects Young Avengers Presents: Patriot, Hulkling, Wiccan & Speed, Vision, Stature and Hawkeye. Another team of young superheroes related in some way to other heroes, Young Avengers was fun when it came out. And by that I mean that original writer Alan Heinberg did a great job, but the book was SO late that it got really frustrating. Anyway, instead of getting forgotten or only featured in their own book like The Runaways were the Young Avengers were integrated into the rest of the Marvel U, including Civil War and the following events. Some even chose different sides of the Registration Act to support, effectively breaking the team up. this series of one shots came out to bring the focus back to the teen characters with a murderer’s row of Marvel’s hottest writers. Overall? The book suffers from the “when does this take place?” syndrome I mentioned above. It’s cool that they got Captain America writer Brubaker to write the Patriot story and Ms. Marvel‘s Brian Reed to write a story featuring the time displaced Captain Marvel meeting his supposed son Hulkling. I believe it turned out that Captain Marvel was a Skrull which kid of cuts the legs out from the story, but at least Hulkling’s emotions ring true. Aside from that, the book adds a few nice bits to the characters, but I’ve got to say that they would have been better off in an ongoing or a series of minis. Instead, this feels too little too late. I believe Heinberg’s coming back to the team which should be interesting. I’ll come back for that (after finishing this trade, I went back and re-read the original 12 issues which were pretty great still, I love how it seemed like they were related to some Avengers, but were actually related to others).