I’m at the end of this year’s It’s All Connected as far as watching goes and I’ve got to admit, I haven’t exactly been hitting it out of the park. Totally changing my plan and watching Food Of The Gods after Frogs might have been fun in the moment, but it sure added a lot of steps that might be more accurately labeled as missteps. Find out more when you hit the jump!

END_OF_DOCUMENT_TOKEN_TO_BE_REPLACED

I think you can take a look at the poster to the left here and understand why I wanted to watch this 1986 TV movie. Young Keanu Reeves and Kiefer Sutherland in a movie where Reeves and his high school pals decide to start defending their school from some of the bad kids, fitting in with the late 80s/early 90s tradition of such films as Class of 1999 and Band of the Hand.

This time around, Reeves and his boys decide to start defending their school after the principal basically gives an impassioned speech asking for kids to stand up for themselves and their school. They come up with a few rules and decide that they will attack people but only if 1) they all agree and 2) their intel guy can dig up enough stuff to convince them of actual wrong doing.

As these things tend to, though, some of the guys let the newfound power and quasi-fame get to their heads and want to start breaking their own rules. But, being the good guy he is, Reeves doesn’t agree. If you’re wondering how Sutherland fits in, he’s the guy that Reeves’ girlfriend is hanging out with. He’s not in the Brotherhood, but winds up on the other end of their gaze because of his relationship with the girl. Oh, by the way, the girlfriend is played by none other than Lori Loughlin of Full House fame. I had a huge crush on her as a kid.

I should probably note that this is not a good movie. It looks kinda bad even for TV standards, though probably not back in 1986. It’s also not very well acted or cast. I mean, Reeves is supposed to be this super white, all American dude, but he doesn’t really look the part. He does to a pretty good job of playing the role earnestly though. Sutherland’s solid too, actually better than the rest of the cast, but he doesn’t have nearly as much screentime. There’s a few fun little bits in there like how they attack their targets and go about their business, but it’s not a must see. I will say that I think Brotherhood of Justice could be ripe for a remake though. Let’s see how Red Dawn does and get to work on that next. 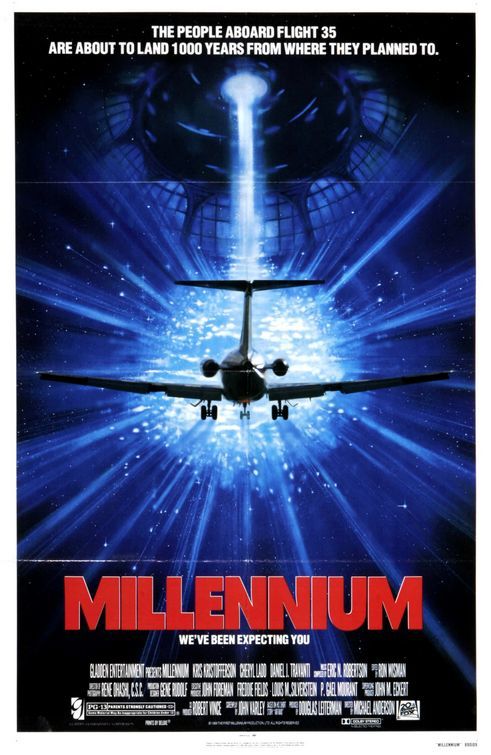 Much like BOJ, I completely stumbled upon Millennium, a film I had never heard of. After seeing it starred Kris Kristofferson and Cheryl Ladd, I was sold. You add in the fact that it’s a movie about time travel and time cops and weird futures and I’m triple sold. Or is the quadruple sold? Forget it, math sucks.

The fairly complicated plot finds Kristofferson investigating a freak plane crash that looks super weird. He winds up hanging out with Ladd who tries to get him to run away with her. We then discover that she’s a time cop from the future who’s investigating…something. I both don’t want to give away details and also missed a few things in the watching, but it turns out that Kristofferson is important and had some involvement in a previous time cop mission.

I was really impressed with how the stories weaved together. Kristofferson and Ladd are on different time lines and in different places in the story when they meet in various scenes and yet everything’s presented in an understandable manner, something that’s not always easy to do in a time travel picture.

I also really liked Kristofferson and Ladd in their roles. They both came off as interesting and complex without bogging things down too much in emotionalism. I also dug Ladd’s boss in the future and her robot assistant or whatever he was supposed to be. I’m not sure what either of their names were, but one of them had a very recognizable voice to me that I couldn’t place.

Anyway, if you’re into time travel movies or like strange futures, Cheryl Ladd or Kris Kristofferson than you can do a lot worse than checking out Millennium.