One of the more confusing aspects of DC’s New 52 initiative is that some books seem to carry over completely from the old continuity while others have gone in radically different directions. This only confuses older continuity geeks like myself who aren’t quite sure how all these Robins can fit in the same world now that Batman’s been around for a lot less time. You’re also dealing with a Teen Titans-less world in the way that most people know them, so where does that leave Batman and his relationship with Nightwing? It’s a slippery slope indeed, but not on the creative side. They’re setting everything up how they want to, it’s the continuity guys and gals who have to do their best to not slide into the infinite game of “what if” and instead just read these new stories as if they’re being told to us for the first time without any existing information. That’s how I tried to go into all three of these book and I had varying degrees of success with that.

I actually had the most trouble with Batman & Robin and not necessarily because I was comparing it to the books I’m familiar with, but because I didn’t really know what was going on for big chunks of the story. I mean that in both a confused-story kind of way and in a “That’s not how I think Batman should act” way. The story confusion came from the book’s main adversary, Nobody. I had no idea who this guy was and wasn’t sure if he had been around in the previous continuity or not. Now, this might seem contrary to my earlier statement that I was trying to put such things out of my mind, but the reason I kept wondering is because it took so long to explain who he was and where he came from. I didn’t want to know if he existed previously because I wanted to compare him to the original, I wanted to know if I was already supposed to know about this guy or not, information that wasn’t presented to me as a reader until pretty far into the tale.

While that confusion was at play, I also keep looking at this guy claiming to be Batman and feeling like he wasn’t jibing with the idea of the character I’ve had in my mind after over 20 years of comic reading. He spends most of the book telling his son — and current Robin — Damian not to follow him out on patrol because it’s too dangerous. He expects Damian to just listen to him and do what he says which anyone could tell you would not happen. For one of the smartest guys in the DCU, this recurring element — which he was doing to protect his son — just felt stupid and feeling smarter than Batman is not a reaction I like having while reading one of his comics in particular.

Artistically speaking I’m a pretty big fan of Patrick Gleason. He’s definitely got his own style and it works well on a book like Batman & Robin. The fact that I thought it also worked well in the Green Lantern Universe shows how diverse he can be. My one complaint in this department would be that some of the more zoomed-out panels seemed to lose definition. I’m not sure if that’s on his end or the coloring/inking department, but it was something I noticed, as if getting further away in some panels made everything lose focus. 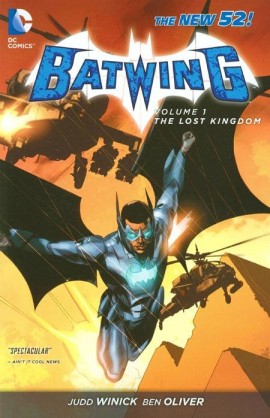 Meanwhile, I had a great time reading Batwing, though it’s definitely an intense comic. If you’re already familiar with some of Winick’s DC work, it should come as no surprise that this book about, essentially, Africa’s Batman is packed with equal parts superhero craziness and social and political elements. In this case, the star of the book, David Zavimbe, is not an orphan who fights for justice, but a former child soldier trying to make up for some of the atrocities he committed in his younger days. As much as I love the classic Batman origin, I’ve got to say, Batwing’s actually rings a little truer to me than Bruce’s.

The story in this first volume revolves around the murder of several former African superheroes who collectively referred to themselves as The Kingdom. Though he’s fairly new to the superhero game, David does his best to figure out why these people are getting offed, which puts him into direct conflict with a real bruiser named Massacre. What I liked about the pacing of this story is that you continue to learn more and more about what’s going on, but there’s always more questions in the works. As we learn about David’s past, you can’t help but wonder why he decided to start wearing a costume or how long he can really do this with such rage and anger inside of him. Plus, there’s the more obvious mystery of who’s killing The Kingdom and more importantly why? These are the kinds of things that keep you coming back for a serialized story like this. I was satisfied enough with the given answers that I want to come back and give the second volume a shot to see how things pay off.

I wasn’t sure if I was going to like the art in this book, but found that it really fit with the story being told. I’m really bad at explaining these things, but Oliver has a style that almost makes his figures look like they’re three-dimensional objects superimposed on painted backgrounds. Does that make sense? Sometimes that kind of style — where the two elements look so disparate — takes me right out of the story, but in this case it brought a more grounded realism that really fit the tone of the book.

Finally we have the one comic that most people tend to agree on as being one of the best monthly comics from DC these days: Scott Snyder and Greg Capullo’s Batman. After hearing a lot of the hype, already being a fan of Snyder’s non-superhero work and listening to him talk about the character on Kevin Smith’s Fat Man On Batman Podcast, I decided to finally jump in and see what all the fuss was about. And man, I agree with every good thing everyone’s saying about this book. It’s just fantastic.

The basic approach to this story is actually somewhat similar to what Grant Morrison did with Batman: R.I.P. and the Black Glove in that Bats discovers a long-standing group of bad guys who come out of nowhere only to come after the Dark Knight. Putting the comparison aside, though, this one is really a lot of fun and offerse a ton of Batman goodness to sink your teeth into.

I don’t want to get too deep into the details because I really don’t want to spoil anything (even though I’m probably the last person on earth to read this book), but one of the aspects I liked about this comic is that it’s really Batman’s story. Sure he interacts with Robin, Nightwing and Jim Gordon, but this is about him trying to figure out Gotham’s connection to the Court of Owls and how his own family ties into all that. Like I said above, I like continuity and Snyder’s doing a heckuva job building an all new one that more fully connects Batman and Bruce Wayne to Gotham City in ways that are both inventive and fun (from a reader’s perspective, I’m sure Bats doesn’t think all this is fun).

Speaking of fun, the visuals in this book are a delight to look at. I don’t have much experience with Greg Capullo’s Spawn work, but he certainly has the chops to nail Gotham in all its weirdness. The skyline looks interesting, but so do new additions like Talon and the Court of Owls masks. I liked staring at these pages as much as I did reading them. His style’s kind of cartoony in places, but I think that does a lot to break some of the tension and darkness of a story that’s not exactly smilesville.

At the end of the day I’m left feeling lukewarm, pretty interested and overly psyched about these books in that order. Batman & Robin didn’t do a lot for me and is already set up for a Sequential Swap. Meanwhile, I like the Batwing book mostly because of the creator and think it would have worked equally well as a creator owned Image book or something along those lines. Lastly, Snyder’s Batman does an amazing job of taking an existing character that I know and love and doing something that really adds to the mythos while also setting all of that in a new universe I’m growing to understand. I not only can’t wait to get the second volume, but also want to get his other Batman stuff like The Black Mirror and Gates Of Gotham which he co-wrote or plotted or somesuch. This guy is legit, you guys. Super legit.