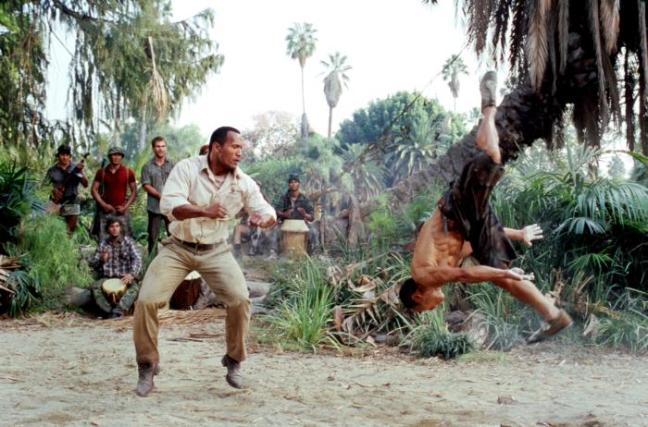 Back in 2003 when Peter Berg’s The Rundown came out, the biggest name as far as we were concerned was Seann William Scott. Sure, Dwayne Johnson — better known as simply The Rock back then — was a big deal in the world of professional wrestling, but he hadn’t become the breakout acting success he is today. Even Berg as a director wasn’t exactly a hot commodity, known mostly as the brash doctor on Chicago Hope (though Very Bad Things made us laugh in ways that still make us feel a little dirty). Anyway, Scott was the big deal in this production. He’d done the first two American Pie movies, Final Destination, Road Trip and his other foray into action-land, Bulletproof Monk.

Looking back, though, The Rundown wasn’t the kind of movie that really stuck out in our minds. Sure, we remembered the cool action scene glanced above (where the wrestler faces off against a group of jungle ninjas with the leader played by Ernie Reyes Jr., better known as Keno from Teenage Mutant Ninja Turtles II) and a few other set pieces or gags here or there. So, when the movie popped up on the ol’ Netflix Instant options in the action category, we were quick to give it another look, especially because it holds an interesting place in the actor’s filmography.

The actual plot of the movie revolves around Johnson’s Beck, a finder and getter who works for a loan shark. He wants out of their agreement, so the shark sends him to the jungles of Brazil to get his son, Travis (Scott) back. As it turns out, Travis is hanging out in a town with a huge diamond mining operation run by evil bad guy Hatcher (Christopher Walken) AND there’s an ancient, super-valuable artifact that Travis knows about and can get his hands on.

While Beck just wants to grab Travis and get out of there, Travis wants to grab the artifact. Since he knows the piece is valuable, Hatcher also wants in on that action and a game of cat and mouse winds up making up most of the story. A woman named Mariana (Rosario Dawson) is also involved in some of the shenanigans and winds up being a more important player than you expect in the beginning.

As everyone tries to get what they want, craziness ensues. Travis doesn’t want to go back with Beck, so he drives their Jeep over a cliff which literally rolls into one of the more painful looking scenes in the movie as both of them — more accurately their stunt doubles — roll down this cliffside smashing into everything from brush to full on saplings. It’s that realism in the action scenes that grounds some of the less realistic or goofy elements of the film. For instance, Beck is pretty much awesome at everything. During an early fight scene, he seems pre-occupied with attackers, but he takes a moment to pop the clip out of a handgun, sending it sliding on the floor, right underneath Travis’ foot sending him tumbling down. That’s insane timing!

And yet, there’s the fight we already mentioned (see below). Beck doesn’t not have an easy time taking on Reyes the jungle ninjas  as you can see in this clip. I think that using moments like that — Johnson probably loses more fights in this movie than he does in all his other movies combined, which adds a nice level of humanity to the proceedings — actually make the super-well choreographed moments seem easier to digest (and there’s a lot of them at the end of this movie). That sense of balance is something that not a lot of directors go for (and often times it isn’t needed or wanted), but Berg did a good job achieving it in this film which doesn’t tend to feel too over the top.

Berg also deserves credit for putting together such a solid cast and utilizing them well. He basically put my idea of who The Rock was back then on screen with a heaping dose of humanity and let him do his thing. Meanwhile, he toned down Scott’s humor, at least from the Stifler character he made so much bank on. Sure, he’s a bit crude and isn’t the nicest guy around, but he’s nowhere near the punch-worthy douche as his American Pie character (well, most of the time). Then you’ve got Walken in one of his many acting sweet spots. He’s a bit older than in something like True Romance and comes off a bit silly, but there’s still that underlying menace that lets you know he’ll kill you just to get some gold. And then there’s Dawson who probably has the widest stretch of acting space to cover and does it with ease, as anyone who’s seen her in anything can easily understand.

Another thing going for The Rundown is the fact that it’s setting helps to keep the picture from becoming too dated. Aside from an opening club scene, most of the movie takes place in a jungle where people wear pretty utilitarian clothing which means that you’re not watching this film and thinking, “Did people really used to wear see through shirts all the time?” The answer, strangely, is yes.

Anyway, we here at Explosions Are Rad would recommend giving this movie a watch if you’re a fan of Dwayne Johnson, action comedies, somewhat complicated plots, Walken craziness and Scott’s more toned down brand of humor.

While I do love traditional Christmas movies like White Christmas, Holiday Inn, Elf and even Love Actually, I’m also quite fond of genre flicks that happen to be set around the holiday like Gremlins (in fact, I wrote a whole list about just that over at Topless Robot). All of which reminded me that Batman Returns–the movie I almost wore out on VHS from watching so much–is set around Christmas time with major moments revolving around tree lighting and other festivities. It’s been a while since I watched this flick and the first thing I was surprised by was how well I know this movie. I don’t just know scenes or lines, but how people are posed in scenes. I knew the exact way that Michelle Pfeiffer was holding herself when she used the taser on her would-be attacker. It’s kind of crazy.

The next thing that stood out to me was how unlikely it would be to see another Christmas-based superhero movie. Even though this one, directed of course by Tim Burton who readers will remember I think is Awesome, doesn’t get into any of the religious aspects of the holiday, it still seems like the kind of thing that studios would shy away from now (what would foreign markets think?!). Heck, I’m surprised they did it back then, frankly.

Anyway, I love how cartoony this movie is without ever being too silly. It really is a comic book movie with a gang of evil circus performers, a mutant being carted around as a mayoral candidate and penguins with rockets tied to their backs! What Burton does, though, is that he makes it all seem real and plausible by creating a world like our own, but clearly different. Yeah Penguin’s kind of ridiculous, but the scenes of him researching his background are pretty heartfelt and you can’t help but be on Selina Kyle’s side because she’s being bullied by the real villain of the movie: corporate crazy asshole Max Schreck played pitch perfectly by the one and only Christopher Walken.

The action’s not as cool as you might see in a recent Batman flick (though you can always tell what’s going on at least) and it might seem kind of over the top, but I would completely recommend this movie if you haven’t seen it and you’re a big fan of Grant Morrison’s run on the book. I highly doubt there’s someone out there reading Morrison’s Batman who hasn’t seen this movie, but I guess it’s possible for people who missed out the first time around or might be younger. Anyway, this is an all time, childhood favorite of mine that I will always cherish, but I think still holds up as a particular kind of movie that will probably never get made again. At least I’ve got it on DVD, plus a butt-ton of toys so I can recreate it on my own if the world ever looses power. I’m pretty sure I could recreate at least 75% with little trouble. 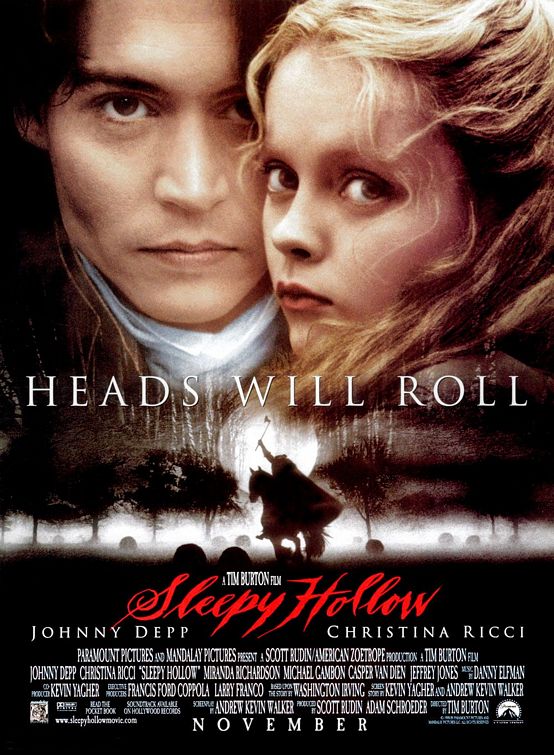 As I mentioned back in my post about Tim Burton’s awesomeness Sleepy Hollow is one of the two big Tim Burton movies I hadn’t seen. Well, considering it’s Halloween season, I figured now would be the time to finally give it a whirl. And, I liked it, but didn’t really love it.

Back in 1999 when this movie came out I was in high school and I think I remember my friends going to see Sleepy Hollow. I was probably working or something (that happened a lot), but unlike Halloween H20 I’m kind of glad I saw it now instead of back then. The reason for that is that a lot of this movie takes place kind of near where I live now (though, thank God, on the other side of the Hudson) and that’s pretty cool.

In case I’m not the only one who waited 10 years to watch this Tim Burton directed flick, it’s about Ichabod Crane (Johnny Depp) a forensic examiner from New York City who’s sent “upstate” (New Yorkers WOULD think that two hours north of them would be upstate, regardless of the fact that there’s another four or five hours of state) to investigate a series of murders in a place called Sleepy Hollow. It’s the headless horseman (played sometimes by Christopher Walken) terrorizing the small town and Crane has to solve the case and get past his obsession with facts, science and reality to see if there’s a real supernatural occurrence going on here. My huge high school crush Christina Ricci’s in it too. And the dad from Beetlejuice.

I’m not really sure what it was about Sleepy Hollow that didn’t really draw me in. It might be that I’ve got a lot of stuff on my mind lately. It might be that I’m a little bored with the casting of Johnny Depp as a weirdo. It might also be that I had a hard time figuring out whether the horseman was actually a supernatural being or not. I get that it’s a big part of the story, Crane’s struggle between science and belief (he’s a one man Jack and Locke from Lost), but it kind of felt like it went too long without nailing it down one way or the other. But I did like how, in the end, it was kind of a mix of the two.

So yeah, for whatever reason the combination of my youthful crush, one of my favorite directors and over a dozen decapitations couldn’t draw me in. I’m going to guess that it’s just a state-of-mind thing. I don’t really have any expectations for Jack-O and my mind is all over the place lately. I’ll definitely have to give this one another look in the future.