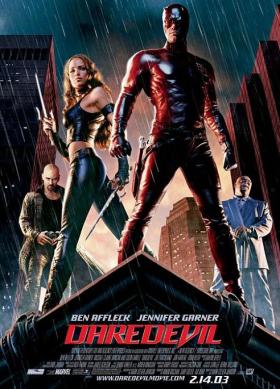 Back before I knew for sure how good comic book movies could be with Iron Man and Batman Begins, I thought Mark Steven Johnson’s Daredevil was a pretty damn good flick. I was and still am a fan of Ben Affleck and really appreciated how the film wasn’t bogged down as an origin or Year One type story. They cover some of that stuff and then move on to a story about a hero who’s been doing his thing for a while.

So, how does it hold up? Not great, unfortunately, but I still like it. Aside from Jon Favreau’s performance as Foggy Nelson (I completely forgot he’s played not one, but two sidekicks to super heroes) and moments when Affleck’s Matt Murdock is hitting on Elektra, most of the performances are a bit overwrought. We get it, Murdock, your life kinda stinks. Actually, I thought Michael Clarke Duncan as Kingpin and Colin Ferrell as Bullseye were kind of awesome in an over-the-top way that reminded me of Punisher: War Zone, another film I dug.

But, the purpose of this post isn’t necessarily to discuss the finer points of the film and performances or how well it compares to the comic (something I care much less about almost 10 years later than I did when I was 20). The point is to talk about the fights. And, they’re actually pretty rad. Your mileage may vary, especially considering some of the goofier moments, like Matt and Elektra play fighting on a playground doing all kinds of crazy flips and whatnot and the fact that most of the final battle takes place on a giant church organ. The following clip has a pretty gigantic SPOILER if you haven’t seen the flick.

I thought they did a good job approximating Daredevil’s super senses in the early fight scene where he goes after a woman beater and rapist named Jose Quesada who got away with the crime (seriously, I can’t believe they named a rapist after Joe Q, that’s ridiculous). They look sleek and fast, but the whole shakey cam thing with super fast cuts hadn’t come into vogue just yet, so you can actually see what’s happening. Farrell and Garner deserve extra credit because you can actually see their faces during these scenes. I have no idea if Affleck did his own fights or what, but it would have been easy to sneak someone else in.

Anyway, like I said, it’s not a great film. It doesn’t really hold a candle to the two movies I mentioned above and I’m not really sure where I would rank it in my all time favorite Marvel movies, but I still like it.