In the inaugural installment of The Great Teen Titans/Outsiders Deep Dive, I got into Graduation Day and the short story “A Day After” from Teen Titans/Outsiders Secret Files & Origins 2003. Briefly, the former Titans and Young Justice teams called it quits after a time-traveling blue robot popped into the present and woke up a Superman Robot that killed Donna Troy. Of course, these being superheroes, they tend to flock to one another and two new books soon followed: Teen Titans and Outsiders. Today we’ll get into the first volumes of each series, which debuted in 2003! END_OF_DOCUMENT_TOKEN_TO_BE_REPLACED 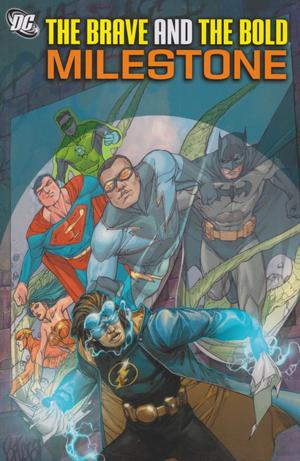 I’ve had these two books sitting in my “to read” box for quite awhile along with The Brave And The Bold : Milestone collection. For whatever reason, I grabbed the B&TB volume first to read, but it was so bad and confusing that I had to put it down. The problem with that book and DC’s questionable idea to shoehorn the Milestone comic book universe into the regular DCU in general is that we never get any in-story explanation as to what the hell is going on. Milestone fans aren’t told how these characters now fit into the DCU (have they always been there and we just didn’t know it? What have they been doing since that line disapeared?) and DC fans aren’t told much of anything about these random new characters that are seemingly a big deal. Without any kind of context, pairing up characters like Static and Black Lighting or Hardware and Blue Beetle just don’t carry any weight and seemingly turn into pointless stories that don’t matter. Even the reprints of various Milestone books in the back of that volume don’t make any sense because they’re seemingly random issues. Heck, the Xombi issue is the prologue to a multi-part story! In the end, I don’t understand why the Milestone characters were plopped unceremoniously into the DC Universe in books like B&TB, Justice League of America or Teen Titans at all and weren’t resurrected in their own, original universe. It’s like DC took one of the more unique ideas they’ve had in the past few decades and downgraded it by cramming it in with all the other superheroes. 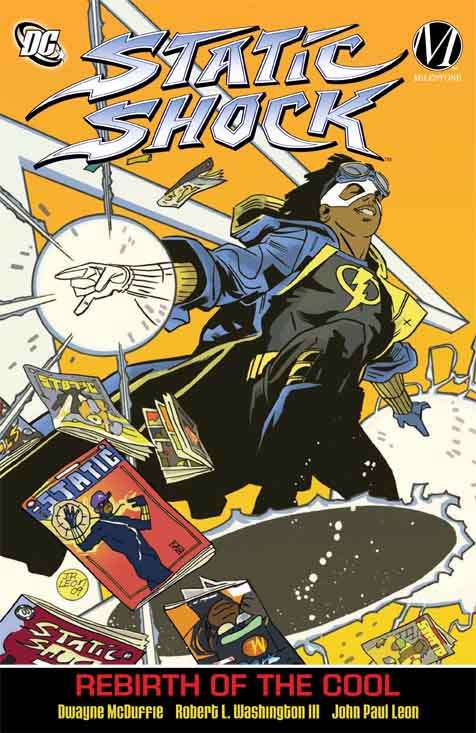 STATIC SHOCK: REBIRTH OF THE COOL (Milestone/DC)
Written by Dwayne McDuffie & Robert L. Washington III, drawn by John Paul Leon
Collects Static #1-4, Static Shock: Rebirth of the Cool #1-4
All of which brings me to my actual trade reviews. As I said when I talked about the Hardware trade, I was very intrigued when the Milestone line launched but didn’t have a lot of extra cash to spend on even more books. My experience with Static was limited to a few comics here and there and the occasional episode of his animated series Static Shock along with crossovers with Batman Beyond and Justice League Unlimited. As a result I went into this book knowing the very basics of the character: he’s a young man trying to juggle powers, school and family in the vein of Spider-Man. As it turns out the Spidey comparisons don’t stop there. Virgil Hawkins has all that, girl drama and happens to be pretty damn smart. He basically Spider-Man with parents and a sister living in the inner city of Dakota and with electricity based powers. But, don’t immediately write the book off for those comparisons, I actually had a better time reading these comics than I have some actual Spidey comics.

I can’t remember how the Milestone universe was kicked off, if they just went right into ongoings or if there was some kind of primer, but one thing that I really like about the first few issues of Static is that it’s not bogged down with or by an origin story. You actually start getting interested in the character before they go back and dump all the back story on you. As it turns out, many of the heroes in this world were created when an experimental drug was used during a gang war (dubbed the Big Bang). Virgil wasn’t actually a part of that, but he was in the neighborhood, thinking about shooting a bully. That same bully wound up getting powers too and the pair would spend the better part of a few issues squaring off.

Another Marvel Universe comparison I could make is that these books actually feel like what I’m told the Silver Age Marvel stuff did: a cohesive universe. Static meets up with heroes and villains from other books. It surely helped that there were a fairly small number of books at the time, McDuffie was acting as a kind of architect for the entire universe and there weren’t decades of continuity to deal with. We do get a more wrap-around, all encompassing story along those lines with Static Shock, which was produced years after Milestone went away and brings many of the heroes together to fight a bad guy. I’m not sure if I like what was the last Milestone story collected with these early issues of Static because it kind of spoils years worth of comics. Also, it’s pretty crazy to see how John Paul Leon’s art changed over the years.

ICON: MOTHERSHIP CONNECTION (Milestone/DC)
Written by Dwayne McDuffie, drawn by M.D. Bright, CrissCross, John Paul Leon, Francesco Velasco, Robert Walker and Jeffrey Moore
Collects Icon #13, 19-22
Speaking of strange collections, I’m not sure why DC didn’t continue on with the regular Icon collection. I’m guessing it has something to do with the eventual DC/Milestone crossover called World’s Collide. Anyway, #13 is included to introduce a character called Buck Wild who is essentially 70s era Luke Cage complete with yellow costume and awful catchphrases. He becomes an important part of the story later on when Icon–an alien who crash landed on Earth before the Civil War–returns to his home planet and Buck takes over for him. Even though this book doesn’t collect the first issues, you get a full origin story for both Icon and his sidekick and mother-to-be Rocket. Even though Icon is clearly the Superman analog for the Milestone Universe, I liked that the book had plenty of departures. Icon was trapped here, he got married, his wife died, he’s experienced many facets of American history and had essentially called it quits until Rocket came into his life and told him he could do some real good. But, that never stopped him from wanting to return to his home planet. The only problem there is that he had been replaced, quite literally, and his people started a trial to see whether Earth was too dangerous to exist. We don’t get a lot of closure to that storyline as Icon has to return to Earth to fight a foe who had made his way to Earth.The volume also contains some big secrets revealed about what caused the Big Bang with appearances by even more heroes and villains from the Milestone U, so you continue to get that larger-universe feel.

With all the unique elements being used in the book and the somewhat serious tone (Rocket is dealing with being a single mother for a good chunk of the book) the character of Buck Wild really puts a damper on the proceedings for me. I get what they’re trying to do with the character, comparing him to other black superheroes in comics, but he’s just so damn annoying and over the top that he’s hard to take seriously. Plus, I really hate when characters are so obviously based on another company’s characters. It’s either lazy or taking pointless potshots, neither of which I’m interested in. SPOILER Buck dies in the book, trying to take on Icon’s enemy. It’s actually a pretty sad and heroic moment which is completely ruined by the funeral issue (#22) which is a series of lame references to other comic book characters and old time radio (they go a pretty long way for a few Amos and Andy references that modern audiences probably didn’t get). I’m still full in support of the Milestone U, further collections and the continuation of these characters stories, but hopefully they’ll make sense and not be jammed into books that can barely hold my attention as it is anymore (yeah, I’m looking at you JLoA and Teen Titans).