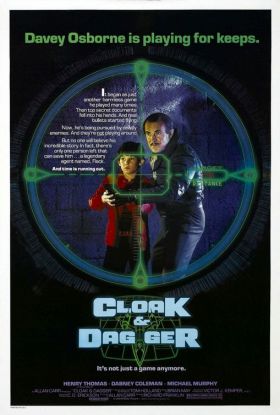 Over the years, I’ve come to realize just how much I love movies about kids dealing with insane situations. It doesn’t come as much of a surprise considering how much I loved Goonies and E.T. as a kid. I guess the real surprise is how much I still connect to those kinds of movies, even ones that I’ve come to more as an adult like Troll, The Gate, Explorers and Monster Squad. There’s just something so cool about taking pre-teens, putting them in these wild scenarios and seeing what they can do given their not-yet-adult ways of viewing the world.

I recently discovered a movie that perfectly fits this mold on Netflix Instant called Cloak & Dagger starring E.T.‘s Henry Thomas and Dabney Coleman. Thomas plays a geeky kid named Davey who has constructed an imaginary friend based on a secret agent from a table top-turned-video game who looks exactly like his dad (both played by Coleman) in the wake of his mom’s death. In his free time, he hangs out at the local video game store with his friend Kim or creates elaborate spy missions for them to act out in their hometown of San Antonio, Texas. While playing spy, Davey winds up with a copy of a video game called Cloak & Dagger that contains hidden government secrets. Of course, no adults believe him, so he has to go on the run as a series of incredibly serious people try any means necessary, including murder, to get it back. Davey’s imaginary friends appears throughout the film to help him avoid death and figure out his next move until, eventually, he realizes he doesn’t need him anymore.

I’ve got to say, I was surprised by how much intensity went into this Richard Franklin (Psycho II, F/X 2) kids movie. Not only is Davey continually hunted by predatory adults in this movie, but his video game store employee friend gets murdered, he realizes he doesn’t need his imaginary friend anymore and he straight up kills a guy. There’s no way this kid’s going to be okay with all this in the future. And it’s not handled in a wacky, cartoony way, so you get to see Thomas really going through some of this stuff on screen, or actively avoiding it so he can keep moving and live to see another day. I must also admit that it easily played on one of my biggest fears: people not believing you when something terrible’s happening because it sounds crazy. Since he’s just a kid who routintely talked about his made-up exploits, everyone thinks he’s full of it when he tries to tell them this crazy story about video games and spies and whatnot.

I probably sound like a broken record at this point, but you really don’t see movies like this made anymore. These days, when kids encounter craziness, if at all, they’re usually in high school or beyond and a lot of the innocence is taken out of the picture. But, there have been a few films like the Spy Kids movies, Super 8 and even the upcoming Earth To Echo which all seem to take some of their inspiration from the movies of my youth.

If you’re interested in checking out Cloak & Dagger — which I highly recommend — look for it on Netflix Instant. If you’re looking to add it to your DVD collection (far as I can tell, it’s not on Blu-ray), there’s the basic version

that also includes The Wizard, King Ralph, Matinee and a few others. I’m thinking about grabbing that last one because, of all the options, it’s currently the cheapest at $5 and I love a good deal!

After watching Sneakers and The Net last week I decided to add a few more movies to the top of my Netflix account including WarGames, which I had never seen before. I got it and watched it today and it’s a great little movie. Matthew Broderick stars as a kid who accidentally hacks into NORAD’s system and plays their war games simulator which somehow makes the system think it’s happening for real. The government goes after Broderick to find out what he’s up to, but he escapes and finds the system’s creator who eventually shows up to help convince the government guys to listen to the kid. Ally Sheedy plays his love interest pre-Breakfast Club, Dabney Coleman plays a guy working for the government who runs the system, Michael Madsen has a brief role in the beginning as a guy with his hand on the proverbial button and the guy who played Eugene in Grease (Eddie Deezen) plays a super-annoying hacker friend of Broderick’s.

Overall, the movie paces itself well and seems authentic enough. Unlike the 90s movies I watched, this stuff was all WAY before my time (it came out the year I was born) so I have no idea how accurate it was on the technology side of things, but the IMDb trivia said the screenwriters Lawrence Lasker and Walter F. Parkes (who also wrote Sneakers!) hung out with some hackers to get some of the tech specs right. Gotta love that level of commitment to the source material, but I’m guessing the hackers didn’t appreciate being portrayed by the super annoying kid from Grease. Man, I’m glad I never had to actually take my phone off the hook and put it on my modem to get it to work. Or if I almost accidentally created a global nuclear war just because I was really excited about playing a new video game. 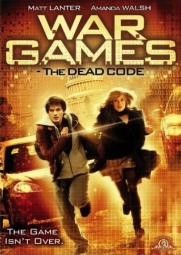 As you might expect, watching the original lead me directly to checking out the WarGames sequel Death Code which I liked much more than I expected to. When it comes to straight to DVD sequels to 80s movies, I think I’ve only ever seen Road House 2 and Lost Boys: The Tribe, one of which was okay and the other I couldn’t even get through. I guess Death Code stands as the best of the bunch as it’s not just a rehash of the original (which would have been excruciating after JUST watching the original). In fact, Joshua, the computer program from the first film shows up as kind of a hero in this one, taking center stage for the last 10 or so minutes of the movie.

This time, the story revolves around a kid named Will who plays an online game which is really a government trap to hunt down terrorists. I’m still not exactly sure how that works, but whatever, I bought it enough. This time he’s on the run with his lady friend and actually gets helped out by the scientist who created the program in the first movie. The only really interesting casting note is that Nicolas Wright plays his friend and Wright plays a guy named Davis on Accidentally On Purpose which was just on. Overall the acting is alright, the lines are all delivered well, but sometimes the reactions seem a little wooden. I would say that it’s not a necesarry movie to watch, but it’s fun enough if you want a thematic follow-up to the original flick.

It’s kind of interesting that even after 25 years we have the same fears regarding computers. Both movies feature computers taking control of systems that have the potential to lead to mass destruction. In the first movie the computer system made the military think the Soviets were going to bomb. Had they trusted the system, they would have retaliated which would have made the Soviets actually fire missiles at the US. In the sequel, the computer system basically gains autonomy and decides to do the same thing, but it goes further in that it sees the people trying to stop is as being a threat and orders a spy plane to bomb them. As much as we want machines to do our work for us (especially the dirty variety), our fiction keeps laying out the problems that could result, even though some of those problems rely on some pretty far off problems like advanced artificial intelligence. Well, I hope it’s far off…