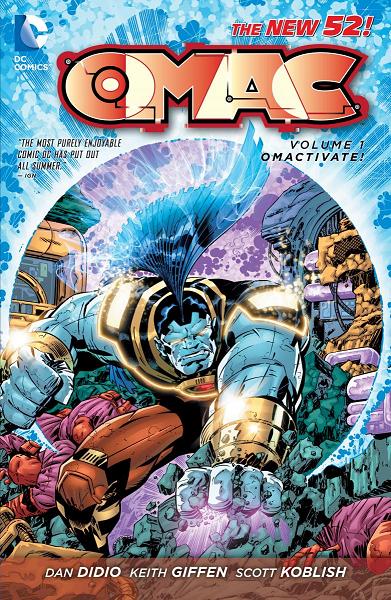 Do you ever get a group of trades and pull the ones you’re least interested in to the top and read those first? I can’t say it’s something I’ve done a lot of. When I was a monthly comic reader, I’d move the books I was most excited about to the top and get to the rest later. But, I recently came into a stack of New 52 books and wanted to read a few of the more random ones first just to see how they were.

One of those books was OMAC. I wasn’t super excited about the creative team or the fact that yet another one of Jack Kirby’s creations was getting yet another make over. But you know what? I was pleasantly surprised by this series, which only lasted the 8 issues collected in this book. This new version actually stands for One-Machine Attack Construct unlike the One Man Army Corp of the original series (which I can’t believe I read three years ago at this point). Set in the new DCU, the human component this time is a scientist named Kevin who gets moved all over the chessboard by Brother Eye to do his bidding.

Basically, this whole series is a love letter to Kirby, or at least that’s how I’m looking at it. Giffen is clearly paying homage to The King’s style with his pages, all of which feature at least one of Jack’s trademarks: squared off fingers, Kirby crackle or the four panel pages he seemed to like. You could also say that some of DiDio’s story elements take their lead from Kirby’s. Not everything is explained super well and things just kind of happen, much like they did in Jack’s DC books.

I like the approach I mentioned above, but it does have its fair share of problems. There’s basically three levels you can enjoy this book on. Let’s called the homage one level. Then there’s the more basic level of a superhero smash ’em up bonanza which it definitely delivers. But, the third layer is a lot less satisfying. I mean, we’re never even told why Brother Eye chose Kevin. Worse than that, it’s never explained why Brother Eye (who annoyingly says “Eye” instead of “I”) even needs a human-hosted OMAC. Why doesn’t he just use a robot? I wish these questions had been answered in these eight issues but they weren’t. I can still enjoy the story that is told on the page, but it definitely could have been more satisfying.

KEEP/DUMP: I’m going to keep this one for now. Not sure if it’ll stay in the collection after a re-read later on down the line, though. 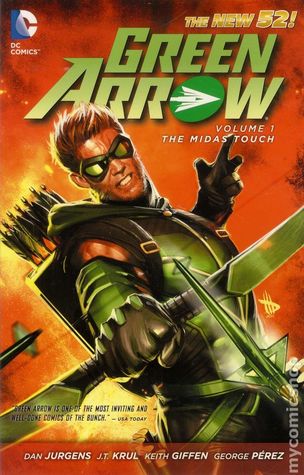 I fell in love with the character of Green Arrow when Kevin Smith brought him back from the dead and was on board with the series up until a few years ago when Judd Winick left Green Arrow & Black Canary. I even started collecting the previous volume by way of lots on eBay and back issues found at conventions. As such, I’m always leery when I experience a new version of the character.

I haven’t written about it much on the site, but I actually really enjoy Arrow on The CW because they gave Oliver Queen a really solid, interesting and believable back story that I can sink my teeth into and enjoy. I can’t say that’s the case for this New 52 series, though. Sure you’ve got rich Oliver Queen dressing up in a superhero costume and running around fighting supervillains, but why?

This is something that I think some of the New 52 books completely failed on and others nailed really well: the question of why this book exists. I understand that DC and Warner Bros. wanted to continue with a book that had done fairly well before the relaunch and also wanted something that eventual fans of the series could read if they were so inclined, but in the book itself, what’s the point of it existing?

Much of the plot of the first arc in this book focuses on younger supervillains who get their jollies committing crimes and sending that out over the internet for people to watch. It’s the next level up from schoolyard or bum fight vidoes in a world with super powers. For some reason, this aspect of the story never grabbed me. It didn’t feel super new (Will Pfeifer did something sort of like this in the amazing HERO). I think I didn’t care about that part of the story because I didn’t care about Ollie. Sure you see him in his civilian identity blowing off the guy who runs the larger Queen family company, but that’s not enough. This is supposed to be a brand new universe where anything can happen, you can’t rely on old stories for that, you need to put enough on front street to suck me in or get me with one crazy hook and unfortunately Green Arrow had neither of those.

It did have one issue — #6 — drawn by Ignacio Calero who looked like a more stylized JLA-era Howard Porter. I’d like to see more from him in the future.

KEEP/DUMP: This one’s going up on Sequential Swap where it will hopefully get me another book.

As luck would have it, on the same day that my Blackest Night theory was confirmed, we got the animated Green Lantern: First Flight DVD and watched it. And I liked it, a lot. I haven’t seen Wonder Woman yet, but GL was far better than all the other animated movies I’ve seen from both DC and Marvel.

But, of course, I have a few fanboy complaints that I’d like to get out of my system right off the bat. I have no problem that they didn’t get into the emotional spectrum and only briefly mentioned how yellow and green are opposing colors, but I thought it was kind of strange that, given that, the floating cities on Oa were yellow. This is pretty picky, but it bothered me (to be SUPER picky, the planet Oa was red). There was a ton of yellow in the movie actually that seemingly had no effect which is why I was surprised when they got into the yellow vs. green stuff later on.

This might dip into SPOILER territory, but I didn’t understand why Sinestro, once he got the yellow ring, had the Sinestro Corps symbol on his chest, but the yellow battery and his ring had the Green Lantern symbol (what’s even weirder is that the actual Green Lantern power battery did not have that symbol).

Okay, fanboy bitching aside, this movie was rad. Within five minutes of the movie beginning Hal Jordan has received the ring from Abin Sur and, soon, he’s approached by a cache of GLs including Kilowog, Boodika and Tomar-Re. After that he’s off-planet on Oa getting hassled by the Guardians (who are more dottering old guys than omnipotent schemers) for being human and not worthy of the ring (we don’t ever get told how the rings are divvied up). Sinestro offers to back him and the two of them go off in search of Kanjar Ro. We get hints of Sinestro’s crazy strictness and desire for order and then the story flips to a GLs vs. Sinestro while Hal’s ring has been stripped away for reason I don’t want to spoil. So, there’s kind of an Iron Man like set-up at the end (depowered hero fighting fully functional villain and still winning), but I thought it was done a lot better.

I was also surprised at how adult the movie was even though it’s rated PG-13. I mean there’s not hardcore sex (or any sex actually) and head splattering violence, but there are a few swears and one particular death towards the end that reminded me of that dude getting “screwed to death” in Jason X. I was shocked by that one actually. There’s even some neck snaps and all that. SPOILER. The final battle itself doesn’t exactly get bloody, but there are literally hundreds (maybe thousands) of implied GL deaths due to suffocation in space. Yeesh.

For GL fans, the movie doesn’t quite get into the specific details that Geoff Johns gets into in Rebirth (like how Kilowog’s constructs are the only ones that make a sound), but we do get great characterizations of all the characters (though Boodika fans will probably not like how she’s portrayed either visually or her character). And a huge part of the characterization is thanks to the voice actors. I especially love Victor Garber as Sinestro. He’s the dad in Alias and plays a somewhat similar character (I think they even based aspects of Sinestro’s face on Garber as I could literally see him). I also really dug Michael Madsen as Kilowog, though it’s not a casting choice I would have ever thought of. The biggest head scratcher for me, though was John Larroquette as Tomar-Re. It’s a pretty small part and Larroquette’s a fairly big deal, so I wonder how he got involved in the project. Maybe he’s a big fan?

An interesting note about the aliens is that they actually changed a lot of their looks. Abin Sur has chin horns, the Weaopners of Qward are spider-like (maybe a Spider Guild reference?) and Kanjar Ro has a squidish look. I was scratching my head about this changes when I realized that, in the comics, those are all just regular looking dudes who happen to be pink. The redesigns end up looking pretty cool and the artists seem to have had a ton of fun creating all kinds of new ones to throw in the background.

There’s been a lot of talk about getting a Sinestro Corps War animated movie (in fact, I’ve written at least two wish list-style bits on the subject myself for ToyFare and Wizard) and I think this might be a pretty good set up. By the end of First Flight you’ve got a status quo that could easily lead into a stripped-down version of SCW that would work pretty well. My finger’s are crossed.

Also of note, there’s a special feature on the DVD where Dan DiDio, Geoff Johns and Peter Tomasi all talk about Blackest Night. Johns actually explains an aspect of the Black Lanterns in it that has been hinted at, but not full stated in the series so far. SPOILER? So, you know the scenes where the BLs see which emotion their targets are giving off? Well, apparently, they actually feed off of that energy and the more there is the more powerful they become. Cool, right? I was wondering when they were going to get around to explaining why they kept analyzing peoples’ placement on the emotional spectrum (this may have been explained in another interview somewhere, but I’ve been keeping away because I don’t want anything spoiled).