I can’t remember why Dark Reign: The Hood stuck out to me when I was looking through someone’s Sequential Swap page recently. Maybe I had heard something good about the book or thought I had? Whatever the reason, I did and I just read it. While I wasn’t blown away, I did enjoy the reading experience quite a bit.

Set in the post-Civil War, post-Secret Invasion, pre-Heroic Age Marvel Universe where things were looking grim and Norman Osborne was inexplicably given the same station as one of the country’s greatest heroes ever, Nick Fury. At the time, Hood not only organized his own group of super villains to work together and share the wealth, but was also a part of The Cabal, the villain version of the Illuminati. But that’s not really what the story is about.

The story is really about a man trying to keep his life in order, which is no small order considering his life involves a wife and kid who don’t know about his criminal endeavors, a group of supervillains always looking for a reason to betray him and a new mask on the scene called White Fang trying to take the Hood out for killing her husband. Oh, plus, Hood’s trying to save himself from Dormamu, the demon who’s connected to the cloak he wears. Needless to say, it ain’t easy being the Hood.

Part of the charm of the story–written by the great Jeff Parker, one of my favorite comic writers around–comes from the times when the camera focuses on some of the villains in the Hood’s gang, including members of the Wrecking Crew. I consider them the go-to villains in the Marvel U and, even though I know almost nothing about them, have grown tired of their constant appearances. However, in this book, they actually get some screen time, which allows me to enjoy their banter. Plus, it’s always fun watching capers from the villains’ perspective to mix it up a little. I don’t know if a villain book can work as an ongoing, but it worked great in this case.

I think there’s also a lot of fun for Marvel aficionados to be found in this book with all the obscure villains running around the same way a book like Villains United was for DC fans. Not being nearly as familiar with Marvel as I am with DC, I didn’t have a ton of those “Hey, THAT guy!” moments, but the characters each had distinct enough voices that I didn’t need to be in on the joke to laugh along with it which I think is a huge accomplishment for a book like this that seems like it would just be something of a throwaway title during the machine that was Dark Reign.

There isn’t anything throwaway in Dark Reign: The Hood, especially when it comes to Kyle Hotz’ artwork. He’s got a kind of stylized look to his characters that don’t make them big and bold and beautiful, like you’re used to seeing in a lot of superhero comics, but it works perfectly because he’s drawing the bad guys. He reminded me of a slightly more restrained Kelly Jones.

I don’t know important it was to the larger Dark Reign story because I wasn’t reading a ton of Marvel books at that time, but it doesn’t really matter. This is a book about the Hood dealing with his life while also showing off some fun villains, creating a new hero in White Fang and trying to keep the largest supervillain gang ever in order. It’s a fun read that doesn’t take much knowledge of what’s going on around it, which I really appreciate as I’ve become pretty much exclusively a trade-waiter when it comes to comics. 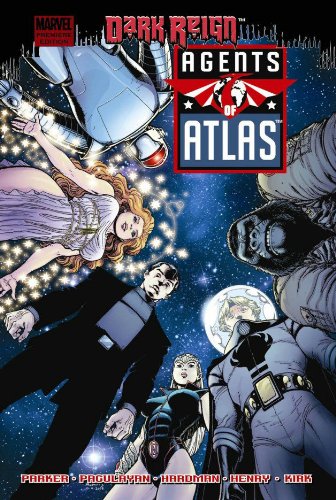 AGENTS OF ATLAS: DARK REIGN (Marvel)
Written by Jeff Parker, drawn by Carlo Pagulaya, Benton Jew, Leonard Kirk
Collects: Agents Of Atlas #1-5, Secret Invasion: Who Do You Trust, Dark Reign: New Nation, Giant Size Marvel Adventures Avengers #1 & Wolverine: Agent Of Atlas from Marvel.com
Man, I love Agents Of Atlas. Jeff Parker has done an amazing job of taking a bunch of dusty old Atlas characters and making them not only awesome, but really fun to keep up with. The hardcover collecting the very first mini along with the first appearances of most of the characters and a ton of extras is not only one of my most prized hardcovers, but also one of the best examples of what a comic book collection can be. So, needless to say, I was excited to read this collection of AoA stories which launched with Dark Rein, a story I generally don’t care for.

This book picks up, relatively, where the last one left off, showing how the Agents are dealing with being an extension of the criminal organization-turned-instrument for change Atlas group. It’s a pretty cool concept that really plays well in the Secret Invasion/Dark Reign era, even if I do think the idea of anyone handing power over to Norman “The Murderer Who Forced His Agents To Wear Green And Purple” Osborn is one of the more stupid ones in all of comics (and maybe fiction). Luckily, while the stories do firmly take place in the Marvel U, there’s a lot of other action going on with adventures from the team’s past to keep you interested even if the quoed status of Marvel isn’t your bag. Plus, I really appreciate Marvel including the Marvel.com Wolverine story as well as the excerpts from various books and even the Marvel Adventures annual (even if it was the one thing I didn’t care to read). There’s one more trade’s worth of this series, then I’m assuming there will be one that ties in with all of the Incredible Hercules/X-Men/Avengers crossovers and minis, and after that, the new series simply called Atlas. Keep up the good work Parker!

THE WAR THAT TIME FORGOT VOL. 1 & 2 (DC)
Written by Bruce Jones, drawn by Al Barrionuevo and one issue by Scott Kolins
Collects: War That Time Forgot 1-6 in Vol. 1, 7-12 in Vol. 2
When The War That Time Forgot came out, I’m sure a lot of people were questioning why this book even existed. Fans weren’t exactly clamoring for a book about faintly-recognizable-at-best characters from the annals of DC’s huge history, nor was anyone asking for a Bruce Jones comic, especially after his atrocious run on Nightwing and the generally dull OMAC book. But, the story held some interest for me for a reason I still can’t place. Maybe it was my love of Barrionuevo who I’ve been a fan of since he popped up on Batman: Gotham Knights with AJ Lieberman back in the dizzy. Maybe it was because I WAS curious about those oddly familiar characters like Enemy Ace, Firehair and G.I. Robot among a good deal of others. Or possible I wanted to read a story about a mysterious island like Lost. Whatever it was, I kept my eye out for the two volumes of this book (it really should just be in one) and gave them a read. I really liked it.

I will say right off the bat that one of the reasons I DID like the series is because of the characters. Many of them I had a very passing knowledge of them, which wrapped the story in another layer of mystery. Sure there was the one in the story about how these characters who had no business being in the same time, but I also kept wondering how Jones would explain whether these are the same versions of the characters we’ve seen in other comics. Let me tell you without spoiling anything that it does pay off.

The island holds warriors from all different time periods from ancient Viking times to the French Revolution to both World Wars and even on into the future. In the beginning they’re broken up into two warring camps trying to survive this island full of dinosaurs.

Well, as you might expect there’s a lot more going on here than meets the eye. The story probably could have been told in 4-6 fewer issues, but I never thought it dragged. But, if you don’t have as easy access to these books as I do or even pay full price for trades, I can see why this would be an iffy purchase. But, if you like classic science-fiction with some mystery, intrigue, dinosaurs and somewhat familiar characters thrown in, give this book a shot.

Also of note are the ridiculously awesome cover artists this book boasted. Neal Adams, Brian Bolland, Walter Simonson, Kevin Nowlan, Ladronn, Justiniano, GEOF DARROW(!) and Howard Porter. They should be enough to get you to buy the book (they’re just 12 pages out of two whole trades), but I liked the story enough to keep the books in my collection…until I get a few beers in me and start clearing off the shelf again.