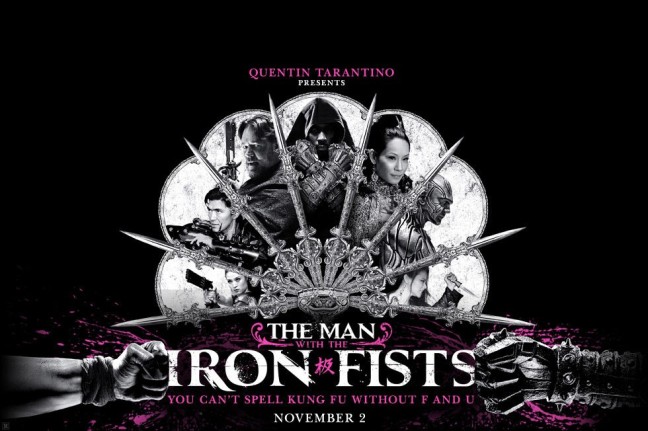 I love The Man With The Iron Fists on two related levels. First and foremost, this is a capital A awesome movie that doesn’t take itself too seriously and revels in the grime and grit of old school Hong Kong action movies but upgrades everything from the fight scenes and weapons to the quality of the actors and shooting. The second level that I dig about this movie is that it’s clearly RZA (who directed, co-wrote with Cabin Fever and Hostel’s Eli Roth and also starred in) making one of his dreams come true.  I don’t know much about him, but I do know that the Wu-Tang member loved these kinds of movies as a kid and eventually proved to people with money that he could do one himself. I think anyone who has a creative streak in them or a longtime fandom for a particular genre can relate to that idea.

For what it’s worth, I watched this movie on Blu-ray which looked awesome and went with the extended cut. I’m not sure what made it different from the theatrical one, but figured I should put that out there.

The story itself revolves around a town called Jungle Village that’s got all kinds of misfits and killers hanging around. RZA is the blacksmith in town and helps build some wild weapons for all the different animal-themed factions. There’s a lot of gold coming into town, plenty of betrayal and backstabbing and a war is brewing between the different groups. Meanwhile, Russell Crowe’s Jack Knife has rolled into town and seems to be a good guy. He teams up with RZA as well as Rick Yune’s Zen Yi who sports a knife suit.

I should note that most of the story details of this film are pretty rote. Raise your hand when you read something unique. RZA is in love with a prostitute who says she wants to run away with him. He believes her and sacrifices his moral integrity by making weapons for terrible people to further his own agenda. That doesn’t go so well, he gets attacked and winds up developing iron hands for himself that he can control thanks to his chi. That last part probably raised some hands which exemplifies an interesting aspect of the film, as cool as it looks and as rad as the fight scenes come off, the most unique aspects of this film revolve around the weapons. Just about everyone wields (or is) a weapon that I haven’t really seen on screen before (or at least not done in such a way) that they make already engrossing fights all the more interesting. I was working on something while watching this movie and found myself transfixed every time a fight scene kicked off.

And that’s what this movie’s all about at it’s core: cool fight scenes with rad weapons. If you’re looking for something with a little more depth, this isn’t your movie, but if you want to see Russell Crowe shoot a guy in the head with a knife gun or two fighters use ice skater-like moves to kill dudes, give The Man With The Iron Fists a watch. 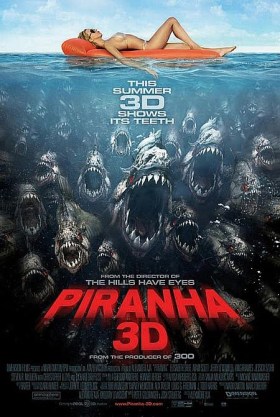 Well, it’s October and you know what that means: I will attempt to watch a horror movie a day in honor of my upcoming favorite holiday. With Lu being old enough to know when someone’s getting killed on screen, it might be trickier than ever, but I’ll do my best.

Back when I watched the original Piranha, I was pretty excited about checking out the 2010 3D remake in theaters. As it turned out, I didn’t make it to the theaters and only just watched it on Netflix Instant, so much of the post-converted 3D hijinks were lost on me.

Like the original, the film follows the adventures of people trying to stop an onslaught of super piranhas intent on eating a group of spring breakers. However, unlike the original film, this one seems to only exist as a parody of the earlier film and others like it. The problem here is that, I felt like the original had an earnestness to it that was both funny and bad that this one lacks. When you go so hard for the jokes and to look bad, it’s hard not to come off as bad all around.

My main complaint is the CGI stuff looks terrible. If it’s supposed to look terrible because that’s the joke, then that’s not the kind of joke I like. I had a similar problem with Tarantino’s Death Proof, which felt like he was trying too hard to poke fun at something that maybe isn’t as funny as he thought going in. As it happens, crappy CGI just looks like bad CGI isn’t particularly funny, even when it’s used to show a piranha eating a dismembered member.

However, there are some pretty great gore scenes. That bit where the wire snaps and you get a good pair of cut/slides is pretty great as is the look of what happens to Jerry O’Connell’s legs. And, of course, there’s plenty of nudity in here if that’s what you’re looking for.

Man, this makes me sound like something of a fuddy duddy, but this movie just really didn’t do it for me. I guess dumb jokes, intentionally bad effects and boobs just aren’t enough to really sell me on a flick anymore. I guess that’s a sign of my increasing maturity. Now to read more comics and watch more fictional people get killed!