I’ve been pretty tired lately, which means I’ve started a lot of movies and left them half-watched at best. Yesterday I was trying to figure out the last time I actually finished a flick and realized it was just last weekend when the wife and I gave Hansel & Gretel: Witch Hunters a watch. I didn’t know much about the film aside from seeing the trailers and a vague understanding that it didn’t do very well, at least in the States. Apparently people wanted a serious film about witch hunters starring Jeremy Renner and Gemma Arterton, but instead got a tongue-in-cheek spin on things.

The Tommy Wirkola written and directed film kicks off as anyone familiar with the fairy tale would expect, with the title kids wandering through the woods, finding a house made of candy and getting into it with a witch. After that, they grow up and travel around acing witches for fun and profit. The main thrust of this story finds them in a particular town with a witch problem that turns out to be much bigger and more revelatory than they expected.

Sounds pretty rad, right? And it is, but there’s also a jokey layer of the film that probably got on a few nerves. For instance, Hansel is diabetic after being force-fed candy by the witch and injects himself with a substance, presumably insulin or something like it, every time his wristwatch goes off. I think it’s actually a really clever idea, but obviously anachronistic. If that’s the kind of thing that will turn you off too much from enjoying a fun action romp with a TON of decapitations, then you should probably skip Hansel & Gretel. If you have a sense of humor to go along with movie-based blood lust, then I think this will be your jam.

A big reason I found the film so enjoyable was because of the cast. I enjoyed Renner in Avengers, but let’s be honest, Hawkeye’s not really a character for most of his scenes. This is what I wanted from that film: a cocky hero who’s really good at shooting things. I’m not super familiar with Arterton aside from seeing her in Quantum Of Solace and Pirate Radio, but I really enjoyed seeing her play a strong, badass lady who’s equal to her brother in the witch hunting game if not better. Famke Jannsen also seemed to have a great time as uber-witch Muriel just rolling through the film chewing scenery and reveling in her badness. Plus, Peter Stormare is in this thing. That guy earned my fandom from Prison Break and I still get excited every time I see him skulk onto screen.

There’s even a few fun plot elements that weren’t exactly mind blowing, but still enjoyable. The troll looked rad and it features some of the coolest movie weapons I’ve seen in a while. Who wouldn’t want one of those side-shooting crossbow thingies? So cool. If that sounds like the kind of thing you want to see on screen, give Hansel & Gretel: Witch Hunters a look. It’s even on Netflix, so it’s easy to get at! 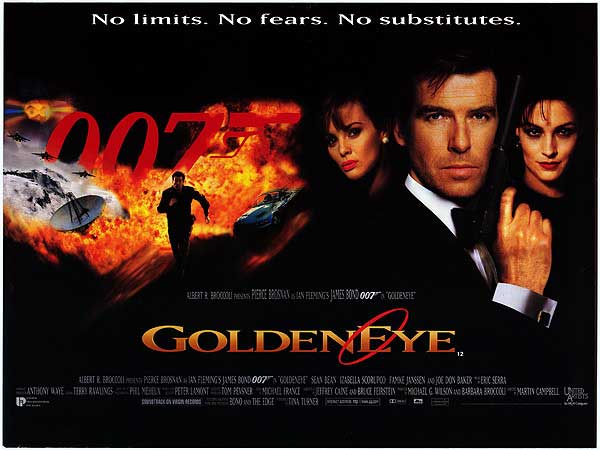 The six year gap between License To Kill and GoldenEye must have been unbearable for longtime Bond fans. Up until that point, there had been a new installment every two or three years since the series debuted with 1962’s Dr. No. A combination of legal problems, unfortunate passings and illness, this expanse of time lead Timothy Dalton to opt out of playing Bond again, so the role went to Pierce Brosnon who was actually favored to replace Roger Moore a few times and was even offered the part but couldn’t do it because of Remington Steele contracts. Other changes this time around are the wonderful Judy Dench as M, Famke Jansson as henchwoman Xenia Onatopp, Joe Don Baker in his first good guy role Jack Wade and Alan Cummings as a computer geek who falls in with the bad guys.

Continuing where Dalton left off as Bond, Brosnon’s version keeps things a little more dark and realistic. Well, for the most part. Some folks might have a problem with the opening sequence’s getaway on a physics level, but if you can’t enjoy all that I feel bad for you. Not only does Bond bungee jump to a secret facility, team up with fellow Double Oh agent Sean Bean (forgot to mention him above), shoot and fight a bunch of guys and then ride a motorcycle off a cliff to soar down, get into a plane and fly it to safety. It was AWESOME. The over the top action sequences (there’s also the tank chase which is pretty epic), Famke’s wonderfully crazy Xenia and another wonderfully light appearance by Desmond Llewelyn as Q bring things up a bit but overall the movie has a pretty serious tone.

Even with the somewhat darker tone, I still had a lot of fun with this movie. In addition to all the elements I’ve already mentioned, the idea of a Double Oh going rogue and returning to face off against Bond is super interesting and I’m kind of surprised hadn’t been used before. It’s also interesting that this is the first of the Bond flicks to be completely original and not have any references to Ian Fleming’s books or short stories. It comes across in the story which has a lot to do with computers and EMPs and giant satellites and the like. Like every movie involving computers from the mid 90s, though, anything having to do with them seems cute and quaint now. When the beautiful on-the-run code monkey and soon-to-be Bond Girl Natalya Simonova (played by Izabella Scorupco) tells some guy the kind of computer she needs, I chuckled to myself. Phones can do what that computer could do.

It was interesting going back and watching this movie for probably only the second time. I was 12 when this movie came out. I don’t have specific memories of going to see it in theaters, but I think I did. Even though I’ve talked about my love of the Bond series, it always tended towards the older movies because those are the ones I watched with my dad on tape or TV. I remember liking Brosnon’s Bond movies for the most part, but there wasn’t any nostalgia there because they were modern. Looking back now, there’s definitely some nostalgia now because these are the Bonds of my teenage years and I saw most of them in theaters with friends throughout high school and possibly college (I’ll have to check out some dates and get back to you with the specifics).

Robert Rodriguez is one of those director’s who’s always impressed me. Sin City, From Dusk Till Dawn, Planet Terror and his Mexico Trilogy were all great in my mind. So, when we got our online Blockbuster account I added just about all of his movies, especially looking forward to The Faculty because 15-year-old TJ wasn’t allowed to see it and later TJs never got around to it. Well, the wait was a pretty long one and then, what do you know, we included it in ToyFare’s Best Alien Invasions (see ToyFare #133 on sale today to find out what place it took and who snagged the #1 spot). So, with that, I borrowed the flick and watched it last night.

Well, you can add this one to the list of Rodriguez movies that I dug. Part of it was a sense of nostalgia I got while watching it. It kind of reminded me of Can’t Hardly Wait. Not thematically, but when it comes to star power. There are SO MANY familiar faces in this movie. Just check out the list above. Freakin’ Jon Stewart plays a science teacher who gets possessed by an alien parasite and stabbed in the eye with some kind of caffeine drug. Great stuff.

Oh, I guess I should explain the plot. A small town in Ohio gets invaded by alien parasites who burrow their way into bodies, taking over control of the inhabitant. Elija Wood’s character finds one of the parasites on the football field and later finds himself in a closet with the hot girl as they see the football coach (T-1000 himself Robert Patrick) and another teacher drop a parasite in the hot nurse (Salma Hayek). From there a mismatched group of high schoolers (think basically The Breakfast Club. Don’t know what that is? Go away) bands together and figures out that the drugs that Josh Hartnett’s been peddling around the school can kill them and do their best to stop the invasion.

I really like how they don’t muck about when it comes to the story on this flick. You’re into the story pretty early on with Elija Wood finding the parasite. They don’t mess around with “is this really happening” BS too much that comes with these kinds of movies. You get your set group of characters pretty early on and you strap in for the ride with them. I also like that Matt Parkman’s partner from Heroes (Clea DuVall) actually compares what’s going on to Invasion of the Body Snatchers and all that. She tells Elija Wood about this and he wonders if all the movies and whatnot about aliens is actually a way for them to get people complacent so they don’t think an alien invasion is possible. It’s a great bit of business that feels really natural in “our world.”

Speaking of the cast again, it’s a lot of fun to see some pretty huge actors (along with some not-so-huge and completely unknown actors) in these roles. But they’re also really really convincing in their roles. Elija Wood looks like a huge geek and acts like one too. Josh Hartnett’s loser Zeke is pretty much a genius who just doesn’t like school and deals drugs on campus. They all handle the Thing-like suspense of “who’s an alien and who’s not?” so convincingly that I really couldn’t figure out who was and who wasn’t.

I also liked how the special FX (do they still spell it like that? Probably not, oh well) looked. Especially in the scene where the parasite-controlled Jon Stewart attacks the kids in a classroom. Zeke rips the blade off of a paper cutter and chops Stewart’s fingers off. But they don’t just lie there, the snake themselves towards the kids. But that’s not all, whisps of blood snake out from his fingers until he’s stabbed in the eye, foams and the parasites under his skin die. Crazy stuff.

All in all, this is a fun little romp that shows off Rodriguez’s directing chops along with the acting talent of the cast that has gone on to prove itself just as well as the adults who play the teachers. Oh and Bebe Nuerth looks hot as the principal. Yeah, I said it.