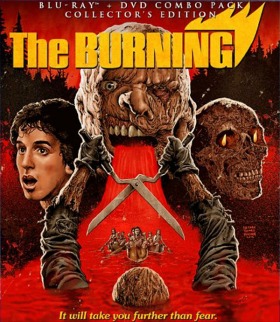 Halloween’s the best you guys! I’ve been able to watch more horror flicks than I expected considering our toddler staked her claim on the TV long ago. Still, I’ve been able to go back and watch some old favorites and also check out a few new films like the amazing Sinister.

A few weeks back, after earning a few extra bucks at NYCC, I decided to splurge on some Scream Factory Blu-rays. I snagged The Burning and From Beyond on sale. A subdivision of Shout Factory, Scream is a horror centric imprint that goes all out when it comes to special features, extras and great looking transfers. END_OF_DOCUMENT_TOKEN_TO_BE_REPLACED

When I was about 15 or 16 and just getting into the world of horror movies, it seemed like I’d never be able to catch up on all the classics. Of course, I knew about the big franchises like Friday The 13th and A Nightmare On Elm Street — what kid in the 80s didn’t? — but there were so many nooks and crannies in this new genre to explore. Being the somewhat obsessive sort that I was, I combed the internet — such that it would have been circa 1999 or so — and remember printing off a list of something like the 666 best horror films of all time. I did a quick Google search that turned up basically everything and nothing at the same time, but if this strikes a chord in your memory, please leave a comment.

Anyway, one of the movies I kept seeing pop up all over the place — in addition to Evil Dead, George Romero’s zombie films, the Texas Chainsaw movies and some choice Vincent Price films like The House On Haunted Hill and The Abominable Dr. Phibes movies — was Stuart Gordon’s Re-Animator. I remember combing my beloved Family Video for these films (the videos were organized in a general alphabetical order instead of by genre), so I’d grab whatever I could. Luckily, Re-Animator was one of those films, so I saw it relatively early on. I remember liking the film — how can you not get into Jeffrey Combs’ craziness and those amazing special effects? — but I’m fairly certain it’s been about 15 years since I’ve watched this film all the way through. That has very little to do with the film itself and more of a focus on slasher films as well as a desire to branch out and watch as many unseen films as possible.

So, while flipping around on Netflix the other day, I saw Re-Animator was available on Instant and decided to give it another whirl. As you probably already know, the movie follows mad scientist Herbert West as he inserts himself into the lives of a med student and his girlfriend. See, West has developed a serum that can bring the dead back to life, an experimental process that he takes very seriously. So seriously that he cares about rekindling human life so much that he’ll extinguish it when he feels it to be necessary.

As it turns out, the two things I remembered most about this movie also happened to be the two best things about it. Combs is pretty much on another level compared to everyone else in this film. It’s not that they’re bad, it’s that he plays the obsessed scientist so well that he deservedly represents the prototype of that longtime character in the minds of many fans. The effects are also pretty fantastic, though I think my memory was reminding me more of the ones from the sequel than the original. Still, that bit where West drills through the corpse’s body is bonkers. And, of course, you’ve got the all-out zombie jamboree craziness at the end of the film.

I should note that I’ve only read a story or two of H.P. Lovecraft’s and can’t speak to this film’s accurate portrayal of the original story. I want to say I did read the original story — Herbert West-Reanimator — but honestly can’t remember. I have heard from people far more well versed in Lovecraft’s work that the film does a solid job of capturing the feel of the story, though. Even if I did, though, I’d be comparing the story to the book anyway.

I’ve got to admit, while I enjoyed this film, I can’t say it’s one of my favorites. Even with Combs being amazing in this film, it seems like I’ve seen a million movies where scientists eschew standard moral practices in order to follow their intellectual pursuits, so the originality in this one comes more from the Combs’ performance and the special effects which isn’t enough to launch this film into the upper echelon. I think if I’d seen this movie a few more times in my younger days, I’d be a lot more into it, but with more story experience under my belt it doesn’t pop nearly as much as it could have back then. Still, I have zero problem recommending this film and think it would easily find a place on the 666 horror films I’d recommend to a genre newbie.