Get into the Halloween spirit with this sampler of Neil Gaiman goodies that I think will give you a nice launchpad into his fantastic work! The best part? It’ll only take a few hours!

Link time! You can find the Neil’s Works section of his website here and read the Colleen Doran interview I did here.

I also tackled five more films in It’s All Connected 2021 to keep that moving along. I finished my Jill Schoelen mini-marathon, indulged a bit on my favorite slasher franchise, watched another John Carpenter film and then got to one wacky killer animal flick! 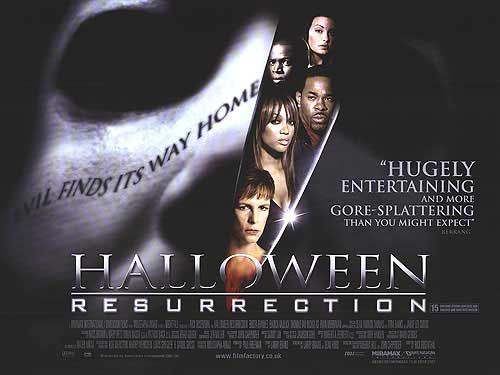 Finally seeing the last chapter in a long running horror franchise is a strange experience. I put off seeing H20 and Resurrection for a while because I had heard that they negated the fourth, fifth and sixth installments. Now, if you go and read that last link, you’ll read that I don’t actually like The Curse Of Michael Myers because it’s basically 2/3 of a movie and doesn’t make a lot of sense. Anyway, once Resurrection popped up on Netflix Instant and it became October, I figured I’d give it a shot.

The plot this time around involves a group of kids being sent to the Myers house in Haddonfield, Illinois as a kind of haunted house reality show that’s only online. Viewers can control the experience to some extent (I didn’t quite catch that part), which actually adds to the Swiss cheese like tapestry of plot holes that makes the movie up. Before I get to that, though, I’ll add a few compliments. I think it’s cool how the movie jumped on the haunted house show bandwagon well before it became a national phenomena. If memory serves, it’s pretty similar to the MTV series Fear that used a very similar set-up was an early step in this evolution. They also use computers, texting, webcams and a few other bits of tech. I also thought they had a pretty good last 20 minutes where Myers was chasing down the Final Girl who was really clear from the very beginning.

Of course, all that was ruined when she grabbed a chainsaw and, with each slash of it, said “This is for SOANDSO.” Oi. But lame dialog isn’t the worst part, it’s all those plot holes. Man, there’s a ton. For this movie to work, pretty much everyone in it has to be a completely inattentive moron. First of all, the man Laurie Strode killed in the previous film wasn’t as tall or fit as Michael, yet she thought it was him. The second guard to get whacked in the beginning ignored his headless comrade on the ground in a well-lit room. The dude who’s obsessed with food has to not shine his flashlight directly in front of him in a dark room not to see Michael Myers. Oh and one guy gets murdered in the house and screams like crazy and no one notices or seems to care that he’s gone.

A few other quick points. First off, I was surprised at how much they made Jamie Lee Curtis look like she did in the first and second Halloween flicks when she’s in the mental institution. She wears her hair so short now that she doesn’t usually look like she did back then, but it’s pretty spot on. Of course, I think it’s lame that, after insisting that none of the movies after the second one counted because she wasn’t in them only to make sure SPOILER her character would die in the beginning of this one so she wouldn’t show up again. Really? Adults act this way? Speaking of acting, Tyra Banks can’t do it which is a shocker because I remember her being great on Fresh Prince Of Bel-Air. The funniest part? She’s playing a producer on a reality show, which is something she is, and she can’t even make it look convincing. Last point, who in their right mind would go to Haddonfield University?

So, while I expected to hate the flick, I actually wound up kinda sorta liking it. As far as a story goes, it’s nothing spectacular or even great, but I have to say it’s better than Curse and I’d prefer to watch either of those over Rob Zombie’s abominations. Speaking of which, don’t expect a post about his sequel, watching his remake was bad enough to turn me off to that dude’s flicks forever.