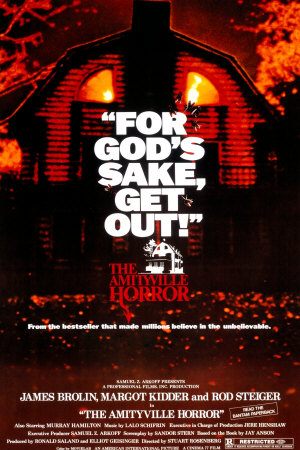 Sometimes I wonder if BC of HorrorMovieADay and I were separated at birth, because our taste in horror movies seems so in synch sometimes. Take his review of the original Amityville Horror for example. I watched the movie and realized I don’t like haunted house movies because the people can just leave and be fine, then read his review and he said just about the same thing. Now, I will add that I do like old haunted mansion/estate movies like original The Haunting or House On Haunted Hill. More on that in a bit.

So, the plot of AH is that James Brolin, Margot Kidder (who, yes, you do get to see topless) and their kids move into a house that the previous family was murdered in. Somehow they don’t know this, nor does anyone in town refer to it until well after it’s clear the house is haunted and driving Brolin mad. I’ll be honest, I didn’t hear all of the story details because it’s one of those movies that’s super quiet, so you have to turn the volume up just to hear what’s being said, then they’ll throw in this ridiculously loud scream or cat hiss. Seeing as how I was watching this thing late at night, I had to keep alternating and hoping the missus wouldn’t wake up. It was annoying. And, since the movie’s generally pretty boring (there are some cool gags here and there, like one of the too-many kids getting locked in a closet and her sister not doing anything to help her, we’re talking hours) I didn’t really care.

Again, I don’t get why they don’t just leave. The missus and I are looking to start the process of buying a house and you know what? Even if we spend every dime we have, don’t have anywhere else to go and have moved all of our stuff in and THEN crazy shit starts happening, I’m out! Screw it. And that seems to be what the house wants, though it’s hard to tell because it doesn’t really have any agency or agenda. Things just happen, but whatever it is does have the ability to mess up some priest’s car nowhere near the house, causing him to crash. So, it seems the best thing to do is just leave, especially when Brolin goes pretty quickly from a normal looking dude to a complete maniac.

This was a hard one to get through because I really didn’t care, but I’m trying to make this daily horror double feature happen and want the movies to be related whenever possible. Luckily, the sequel wasn’t too bad, at least for the first half. 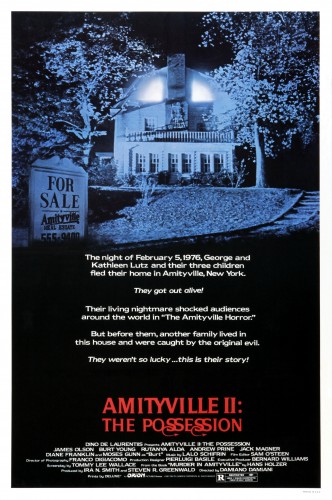 So, what made Amityville II: The Possession better than the first? Well, first off, it gets to the weirdness much sooner because Burt Young (Pauly from the Rocky flicks), the patriarch of another big family, is a dick right off the bat, the house just moves things along faster, with a gun being held to dad’s head within the first half hour. Another reason I dig this movie more than the original is that whatever the thing in the house is (a demon I guess) actually has some agency. There’s an awesome POV sequence where it comes out of the hidden room in the basement, covers a crucifix with a table cloth and starts looking at the oldest son. Later, it really starts haunting him in an even cooler scene with these great tracking shots that swoop up and around him while he scurries up the stairs, ending in what looks like the invisible demon using the son as a trampoline. After that, he’s basically possessed and getting messages from the demon through his Walkman.

Or at least I hope so because, well, he has sex with his sister. There’s some weirdness between them early on that I noted in their first scene together, but later, after he’s possessed, the brother goes into the sister’s room, the sister basically tells her brother that she thinks her dad is forcing their mom have sex with her. Right after that, brother tells sister she’s beautiful and says: “Take off your nightgown, just for a second.” And she responds: “Okay, but just for a second.” GUH, it’s SO GROSS. They start making out and then we cut to her confessing to the priest. Oh, and to make matters even worse, later, the brother tells her to leave him alone and then the mom asks what she’s done to her brother and slaps her! This might be the most dysfunctional family since Leatherface’s.

The son spends the good parts of the movie struggling with not killing his asshole dad and then, finally, SPOILER he gives in and kills them all. The movie should have ended there. Instead, it goes on and the priest tries to get the demon out of the son (who’s still alive and in jail) and it turns into an Exorcist rip-off. There is a cool effect where the son’s head starts breaking apart, but it isn’t worth that whole extra 20 or 30 minutes of derivative nonsense. Were I to watch this movie again, I would turn it off right after the priest wakes up on his fishing trip. The end. That movie would get a solid four stars instead of the 2.5/3 it has now in my head.

Again, houses aren’t scary because they’re familiar. I know how houses work, so it’s pretty easy to tell when something’s amiss (like when an entire room explodes and some asshole blames two little kids). Sure, when I’m in a strange place, I might get the willies, but random things moving around and blood coming out of things would make me leave immediately. I spend the whole movie wondering why these people are so stupid (more so in the first movie which takes place over 20 days than the shorter time frame of the first sequel). However, I do like older haunted house movies because those places are remote and unfamiliar. There’s secret passageways and other cool things going on, basically there’s more unknown than creaky pipes and opening drawers or whatever.

I’ve got the third Amityville flick on my Instant queue, but I don’t think I’m going to watch it anytime soon, I’ve got enough other goodness to get through and review this month.

Like I said recently, I’ve been trying to watch as many movies as I possibly can with the Netflix on XBox option, but I’ve also had a few Netflix DVDs sitting around (though the Broken Arrow DVD was completely cracked down the center, so that’s one less to worry about for now). So, here we go with the reviews.

I distinctly remember watching Westworld with my dad when I was younger, but I apparently didn’t remember much but the very basics from the movie. I lucked out and got Em to watch it along with me and it seemed like she liked it well enough (she didn’t make fun of me like she did after watching The Warriors so that’s a plus). Anyway, I also really dug the movie, probably even moreso because I didn’t remember every little part of it.

The basic plot is that there’s this resort populated with robots where you can go and live like you’re in another time period (Roman Empire, Medieval England or the Wild Wild West). You can basically do whatever you want there (including shooting and having sex with the robots, though, presumably different ones). Our story focuses on two visitors, one played by James Brolin, the other by a guy named Richard Benjamin who looked familiar, but nothing on his IMDb rang any bells. Yul Brenner also starts as the robot Gunslinger who keeps coming after Benjamin. Well, the vacation doesn’t go quite as planned as the robots start revolting and SPOILER the Gunslinger kills James Brolin (Em and I both thought he’d be the hero, oh well), sending Benjamin running from the relentless cowboy killer robot.

There’s a lot of cool special effects and writer and director Michael Crichton (I had no idea he directed movies) does a great job of selling the story. According the IMDb trivia he got the idea for the story after visiting Disneyland, which was pretty funny to me because it seems pretty familiar to The Stepford Wives, which I read, watched and reviewed recently. The trivia also said that The Gunslinger also inspired John Carpenter to create the greatest slasher in movie history Michael Myers. So, if you’re a fan of either of those other movies or just cool sci-fi robot stories starring Jame Brolin and Yul Brenner, then you should definitely check this one out.

I’m not even sure why I put Hard Rain on my queue. It was probably one of those suggested movies that Netlifx does when you add a movie to your queue. Anyway, I wasn’t all too excited to watch it when the DVD came in, but I’m really glad I did as this is a fantastic action movie with one of the coolest and best handled natural disaster plots I’ve seen in a while. Plus, it’s got Christian Slater, Morgan Freeman, Randy Quaid, Ed Asner, Betty White and Minnie Driver sporting a pretty bad American accent.

Plotwise you’ve got Morgan Freeman leading a band of robbers trying to get their hands on the money in Slater and Asner’s bank truck in a town in danger of flooding. Meanwhile Quaid and his fellow police officers try to save the townspeople like Driver and White. As the water rises (and boy, does it get up there) so does the tension and a great “anything can happen” feeling. It does get a little crazy at the very end with all kinds of allegiances changing and crosses being doubled, but all that water makes it okay in my book. You’ve got everything from a boat being driven through a church window to a wave runner chase scene in a high school. It really is just a fun movie that offers up plenty of “how are they going to get out of THIS” situations. I highly HIGHLY recommend this movie to anyone who like fun movies who don’t let things like science get in the way of enjoying a movie (in this world, a gun can fire no matter how long it’s been under water, so just deal with it okay?).