Alright folks, we’re hitting the home stretch here with the last post about books I read in 2018. Hopefully, I’ll keep up on writing about the novels and non-fiction works as I read them, so these year-enders (or beginners at this point) don’t become so unwieldy, but we’ll see about that. Check out parts one and two here and here then hit the jump for the last entry.

END_OF_DOCUMENT_TOKEN_TO_BE_REPLACED

I haven’t been blogging too much lately as regular readers can tell. I’m not sure why that is. Sure, I’m busy with a new gig, but I also don’t have the same burning desire to write down my thoughts about everything I see, hear or read. But, I do still love having this page here as my little corner of the internet extolling the virtues of the things I love. It also works as a pretty handy external memory because mine is getting worse and worse and these are some stories I want to remember.

A few weeks back I realized that I’ve moved out of my “watching people kill or get killed” phase and wanted to move into some more emotional offerings. I’ll never stop loving action and horror movies and I do feel like they are a great distraction when you’re already feeling incredibly bogged down by real-life emotional matters, but once things equalize a bit, it’s nice to see if the ol’ heart can take on a movie meant to do more than thrill and spill blood.

So, with that feeling in mind, I went looking around the Netflix queue to see what was available and landed on The Giant Mechanical Man. I only knew about this one because I’m a big fan of Jenna Fischer from The Office and saw her tweet about it. The film about a pair of wayward souls who discover each other in Detroit also stars Chris Messina of The Wendy Project fame (another beloved show in our house), Malin Akerman and Topher Grace. Fischer’s husband Lee Kirk wrote and directed the film.

The movie follows Fischer, an awkward adult who doesn’t quite know what she wants to do with her life and Messina’s title character who dresses up in a giant suit, paints on makeup and walks on stilts as a piece of performance art. The two eventually find each other while working at a zoo to make some scratch and develop a genuine relationship in a world seemingly filled with plastic, surface-y characters played by Akerman, Grace and Harry Crane (er, Rich Sommer).

For me, the cast comes together really well to tell this story so concerned with authenticity, Art and honesty. I also really appreciate that the movie was shot in and around Detroit. I grew up less than an hour away from the city and while it wasn’t a regular destination, I have a soft spot in my heart for it, especially when it’s treated as more than just a place where awful things happen. The fact that this true love grew there was a nice part of the story that just struck me. I’m glad I made this one of the first more emotional movies I watched this year.

That feeling of opening-up has also spread into my comic reading. The last time I went to the library I found a different section of trades in the sci-fi section (the other two are in YA and kids) and saw that they had Michael Cho’s Shoplifter. I immediately snatched it up because I’ve been following Cho on Twitter for years now, love his style and had been wanting to check this book out since I saw him posting about it.

The graphic novel — a sequential story told all in one volume as opposed to the monthly comic book format everyone’s familiar with — stars Corinna Park, a woman in her mid-to-late 20s working for an advertising agency. But, that’s not what she wants to do with her life. She wants to be a writer. This entry level job wound up taking off, sucking her focus and making her kind of hate her life a little bit, what life there is to hate. The title refers to her not-too-often habit of stealing a magazine while buying other goods at a corner store near her house. After meeting a guy she likes, she starts thinking about making a huge change in her life, though even that doesn’t quite shake out like intended.

I really enjoyed this story. The story itself is not one unlike the kind you see at the heart of a lot of indie movies like Giant Mechanical Man or The Lifeguard, the idea of not knowing what the hell you’re going to do that swirls around creative types in all mediums. Cho literally adds his own style to it by using a visual look that uses black, white and pink (instead of gray). Pink might seem a bit one note for a lot of people, but it works as well during the day as it does at night and adds a kind of frosting quality to what Corrina’s going through. This isn’t real life for her, it’s just the gussied up version she’s living for now until she figures out the real thing she wants to do.

As a wannabe writer myself, I can’t help but instantly fall for Shoplifter like I have so many stories like it in the past. I am super on board for anything else Michael Cho wants to write and draw about. His is a voice I can relate to and appreciate. 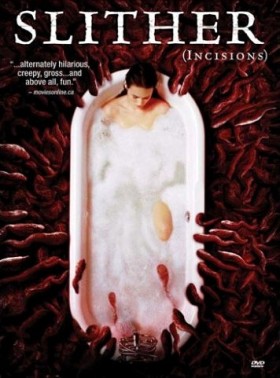 One of the reasons watching Zombie Holocaust made me so mad was because I was focusing on it instead of watching the excellent Slither which I had seen years ago when I lived with my pal Rickey Purdin (of DC Comics and VHS Notebook fame). But, aside from the basic plot, a few key scenes and the inclusion of Jenna Fischer, I had forgotten almost everything about this movie, including the fact that faves Elizabeth Banks, Nathan Fillion and Michael Rooker starred.

Anyway, after finishing that crapfest, I turned the Xbox on and finished Slither. Holy crap, you guys, this is such a great movie. I put it up there with Trick ‘r Treat as one of my favorite horror movies from the last 1o years. The beauty of this film is that it includes so many different horror elements and does them all well. You’ve got the Invasion of the Body Snatchers thing, the small town thing, the “this could spread to the whole world” thing, the zombie thing, the gore thing, the pretty-good-CGI thing, the funny thing, it has ALL THE THINGS.

If you haven’t seen the movie — and you really should, it’s fan-effing-tastic — these alien creatures wind up in a small town and start taking over the population. Because they take over Rooker first and he loves Banks, everyone who gets infected and becomes part of the hive mind, they all love her and bring her to Rooker who has turned into…something else. It’s just such a cool idea that feels familiar enough that doens’t need a ton of info to get into, but also feels fresh. That’s pretty much the way this whole movie feels. Meanwhile, Fillion plays the sheriff who’s doing his best to stop the invasion and just survive this ordeal.

Unfortunately, I had to watch this movie mostly with subtitles — which I didn’t even know you could do on Netflix Instant until the other day. This worked out so I could continue to understand the movie while I watched it either at night or while Lu took naps. The problem though is that I really missed hearing Banks and Fillion give their dialog. Those two are such good, funny actors and bring both elements to this film which might seem funny, but is definitely taken seriously. We need more movies like this, dammit!

In my zeal to enjoy my re-found health and the nice weather, I lost track of time and will not have enough time to watch a James Bond flick tonight (also because of NBC comedies and Jersey Shore, of course). I thought that meant there’d be no Bondy goodness today, but then I remembered that we were finally getting the chance to see Michael Scott’s Threat Level: Midnight starring Michael Scarn on tonight’s episode of The Office (funny I forgot about it after calling the show out on my Maxim TV column). The episode featured a secret agent whose nemesis has a gold face and killed his wife. Doesn’t sound too far off from a Bond movie, right? Well, he’s also got a robot butler, a mystical hockey teacher and his own signature dance which you can check out here.

I was thinking about this earlier today, but I love it when movies or parodies of movies don’t just go with the genre they’ve chosen to tackle but also add in a few others. In this case, Michael Scott didn’t just want to make a secret agent movie, but also one with a robot AND a sports mentor/training montage. Fun stuff.

I know this is a bit of a cop out entry, but at this point, I’m thinking the DDOS posts will be going on past the end of the month unless I can watch a bunch of movies back to back next week (we’re heading to Ohio this weekend). Don’t worry though, you’ve got a weekend full of James Bond Jr. posts!