I believe I saw Dracula 2000 in the theaters with my friends. I would have been about 17 at the time and had been watching horror movies extensively for a year or so at that time. If memory serves it was the first feature length version of the Dracula story that I ever saw. I’d seen or heard enough through cartoons and TV to understand the basics: some people encounter Dracula who winds up surrounded by vampire chicks, but wants another woman who’s harder to get. Meanwhile, some humans of the Van Helsing family are trying to stop him. My problem with the Dracula movies I’ve seen is that they follow the template too closely. If you’ve seen the original–or even Nosferatu–then you’ve pretty much got the gist. I had this problem with the last two Drac movies I watched Count Dracula And His Vampire Bride and the 1979 Dracula. Just absolutely boring.

I did not have that problem with the unfortunately named Dracula 2000. Any movie with a year in the title, especially the year 2000, just comes off as gimmicky and corny, doesn’t it? Anyway, the story this time around is that Van Helsing trapped Dracula years and years ago, but when he did their blood mingled, granting him a portion of immortal life which he uses to make sure no one accidentally brings Drac back. Of course, that doesn’t work out as one of his workers winds up telling her boyfriend and his crew of criminals about Van Helsing’s secret vault. They break in and grab the casket, thinking it’s an elaborate safe, and wind up resurrecting the original vampire. From there Dracula (played by an almost unrecognizable Gerard Butler) amasses his trio of hot lady vamps (Vitamin C, Jennifer Esposito and Jeri Ryan) and stats stalking Mary who happens to be VH’s daughter. Joining Mary on the side of the angels is Johnny Lee Miller as Van Helsing’s young protege.

I like this flick because, while it does stand on the structure of a traditional Dracula movie, it also updates things, including setting and special effects. Those other two movies I mentioned were both made in the 70s but set in the Victorian era which is ultimately another boring trope you’ve seen several times. D2K is set in modern day London and then New Orleans, features some pretty impressive wire-fu stunts and takes advantage of technology without relying on it too much. There’s only one CGI scene I can remember that looked cheesy (when Dracula turns into a wolf), which is pretty impressive considering how bad some of the movies from this time look now.

Director Patrick Lussier, who also did My Bloody Valentine 3D, also seemed to have fun with the movie. I guess there was a bit of a trend of combining horror and action around this time with big budgets like Brothers Grimm and Van Helsing, neither of which I’ve seen. It’s fun to see some money put behind one of these classic stories set modern times with the inclusion of big technologically impressive prisons, smaller secret hiding places and an arsenal of vamp-killing weapons. It’s also fun to see such a well-known cast. Nearly every role is filled with a name or at least a “that guy.” The crew of bad guys alone includes Omar Epps, Danny Masterson, the drunk roommate from Dead Man On Campus, Sean Patrick Thomas who was also in Halloween: Resurrection as my favorite character and Esposito. Nathan Fillion plays a priest. IMDb tells me Shane West was even in the movie, but I can’t remember who he played! And, to add a connection to the flicks that came before it, Christopher Plummer plays Van Helsing.

I remember being pretty blown away by the reveal of Dracula origins when I saw this in the theater. SPOILERS I guess if you haven’t seen it. We’re shown that Dracula was actually Judas, the man who, according to the Bible, betrayed Jesus for 30 pieces of silver. This explains why silver hurts vampires. Kinda neat, right? I thought so, and still do, though I see a few problems with it now. If the whole eternal life thing is supposed to be a punishment from God, why does Dracula wind up causing even more trouble for humanity? Wouldn’t it have been better for him to just die and go to hell? On the other hand, maybe humanity was intended to be punished for allowing the son of God to be murdered? I’m not sure. Maybe it was better explained and I missed it, but I thought it was an interesting take on a story I’ve read and seen hundreds of times.

I highly recommend watching Dracula 2000. I’m usually pretty skeptical about these early 00 horror movies because most of them are pretty bad. Sometimes you stumble across something like Halloween: Resurrection that isn’t great, but not as bad as you thought it would be. I’d say that D2K is actually a good vampire movie, with a new spin on the Dracula mythos, a solid cast and enough fun on the screen to keep you entertained. I’d say it’s probably one of my favorite Drac movies ever! Has anyone seen the sequels? I know they’re by the same director, but I assume the budgets were nowhere near as high. I think that, like this one, they’re available on Netflix Instant so maybe I’ll give them a whirl.

In an attempt to quell my fears with all the craziness yesterday, I put together a dresser and watched a bunch of horror movies starting off with Urban Legend, which I had never seen before. That flick reminded me of other late 90s slasher flicks like Scream and the IKWYDLS movies thanks to the cast of well known actors getting hunted down and slaughtered by someone who had been wronged in the past by one or more of them. I’ve had the two IKWYDLS movies sitting in my to watch pile ever since I was at Wizard and they cleared out the DVD library and gave away a bunch of freebies. Unfortunately, I didn’t find either of them nearly as enjoyable as Urban Legend. Oddly enough, this movie starts off with a similar discussion of the same “boyfriend on the car roof” urban legend I mentioned in yesterday’s review.

The plot revolves around a group of friends–Freddie Prinze Jr., Sarah Michelle Gellar, Ryan Phillippe and Jennifer Love Hewitt–who accidentally hit a dude with their car and instead of calling the cops and doing the logical thing, they decide to dump him in the water and act like it never happened. Well, one year later, someone starts leaving notes that invoke the title. People start getting killed (including Johnny Galecki), mistrust spreads and eventually the killer is revealed and some people survive.

This movie was kind of destined to fail with me from it’s very inception. I hate movies or stories that rely on people making stupid decisions and then feeling like they can’t tell anyone what they’re dealing with for fear of getting caught. Had they called the cops when they should have or even right after someone started threatening them, it would have been okay. Heck, they weren’t even friends anymore after a year of college. If someone threatens to kill me, I don’t care, I’m going to the cops, no matter what Ryan Phillippe says! That’s a motto I live by.

The only really draw here is for vintage SMG and JLH hotness (two of my biggest teenage crushes) and I would assume the same goes for the fellas in the movie as well. I’m going to get into a little SPOILER territory here so get into another reason why I dislike the movie. Here goes. So, the killer winds up being some guy involved in the hit and run, but not the one they thought it was. Keep that in mind because it makes a lot of things make very little sense. For instance, they throw a red herring into the story–Galecki–and then immediately take him out by having fall victim to the killer. How would the killer even know he was there? He had just been hit by a car and was on the other side of a guardrail over a cliff. So, it doesn’t make logical sense, but it also doesn’t make story sense because you’d want to keep that red herring around to draw suspicion away from the four leads. Once he’s dead, you have to assume it’s either one of the kids or the guy who got hit. The twist that it’s some guy they don’t even know lessens the impact of the story and makes it a lot more complicated. In fact, I think I’ve already thought about this movie way too much. Moving on. 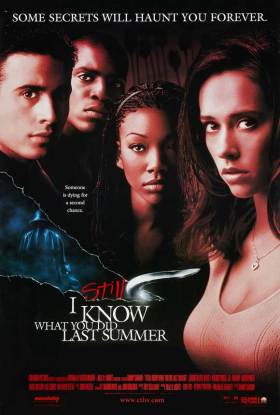 I guess I liked I Still Know What You Did Last Summer better than the original, but not by a lot. This time around, JLH is in college where she rooms with Brandy who’s dating Mekhi Phifer. Prinze is still back in the little town all the murders from the first movie took place in, which is why JLH doesn’t want to return for the Fourth of July vacation. JLH also has this dude named Will who’s sweet on her and, when Prinze decides not to go with her on a trip they win via radio contest to the Bahamas, Will winds up taking his spot. Once on the island, a storm picks up which cuts off all communication to the island as well as boats, so it winds up just being the leads and some of the hotel workers (including Jack Black as a white dude wanting to be a Jamaican rasta, Jeffrey Combs and the always lovely Jennifer Esposito) against the rain slicker-wearing killer.

There’s some interesting suspense moments like when JLH gets locked in the tanning bed (those things make me nervous anyway) and SPOILER Will’s reveal that he’s in on the killings was great “Because it’s not my blood.” But overall, it winds up being more complicated that necessary. Ben Willis (the killer from the first movie) used to live on this island and had a son who turned out to be Will who played a long con to get this group to the island. Much like the dudes in Scream, the level of acting chops a psychotic murdered has to have is pretty impressive.

The Scream sequels suffered from the same clunky explanations for their sequels. It’s always an unexpected relative or the original killer coming back (“They never found a body”). I think I prefer my killers to be supernaturally charged so the filmmakers don’t have to waste too much time thinking of why they’re back and killing. Michael Myers got up, Freddy lives in dreams. Done and done. I can not imagine the lengths they went to to explain the 2006 straight to DVD I’ll Always Know What You Did Last Summer. Blech, no thanks.