As I mentioned when I ran down my favorite new records of 2011, there were a handful of bands that I got into more so than just picking up an album of theirs this year. These are bands who I was either already diving into when a new record came out this year or just finally got around to listening to after years of neglect and ignorance on my part.

First off, I spent the beginning and much of the rest of 2011 listening to The White Stripes. I got most of the records I didn’t already have for Christmas 2010 and rocked out to them for a good part of the year. That band rocks my face off in such different and awesome ways, but I already wrote about Jack White extensively towards the end of 2010, so I’m just going to link to that post as it still sums up my thoughts. I also really got into the Foo Fighters this year picking up their records either digitally or at yard sales on the cheap, but I wrote about them already too. So, now on to the new stuff! END_OF_DOCUMENT_TOKEN_TO_BE_REPLACED 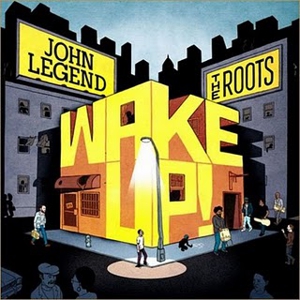 THE PLAYERS: John Legend (vocals) and The Roots (everything else)
THE STORY: Inspired by his experience campaigning for Barack Obama in 2008, John Legend decided he wanted to make a record with The Roots that reflected how he felt at the time. They got together, recorded a series of covers and one original track and the results was the 2010 album Wake Up! (via Wiki).

Like a lot of posts, I’m going to kick this one off with a story from my past. It’s not too long, so don’t worry, I’ll get to the music shortly. Like a lot of colleges, my school Ohio Wesleyan University held a yearly concert on campus for the students called SpringFest. I never actually went to one because I either didn’t care or had something better to do (seeing Everclear with my buddy Jeff instead of watching The Counting Crows). But there was one year that I really wanted to attend and that was when The Roots were playing. I’d never actually listened to the funk/hip-hop group’s records at that point, but I knew of Questlove from that hilarious Chappelle Show skit with him and John Mayer and the band from my buddy Toth who’s always been a lot more tapped in than me. I was all set to buy my ticket after Easter, but on the way back to school after heading home for the weekend, I got a crazy speeding ticket. Money was tight in college and the speeding ticket completely wiped me out, so I couldn’t go to the show. Wah wah.

Fast forward to modern times. Jimmy Fallon scores Conan O’Brien’s old spot on Late Night and he makes the ingenious decision to hire The Roots as his house band. Not only did he instantly score the best band in late night, but also gave me and millions of other night owls the opportunity to become familiar with the group. After being so impressed by their chops I went out and bought one of their albums Phrenology, but it’s more of a slick hip-hop record and that’s not what I was looking for. I wanted something a little more soulful and funky. I didn’t have to wait too long because, soon enough, Jimmy was talking about a new record featuring an epic team-up of soul singer John Legend and the band called Wake Up!

I didn’t run out immediately and buy the album. In fact, it wasn’t until I saw the digital version on sale on Amazon for $5 that I bit. Man, what a fantastic use of a Lincoln. Like The Roots, I’ve long admired and appreciated John Legend from a distance either through live performances on TV shows or guest spots on other records, but I never jumped in and got one of his records. Wake Up! seems like the perfect entryway to both bands but also offers up all the soul/funk/rock/hip-hop stew that I could want from this collaboration. As far as supergroups go, these are two great tastes that taste great together, almost like they’d been playing together for years.

I even dig the fact that they went after lesser known songs to cover for the most part. I’m no soul/funk aficionado, but even I have heard “Wholy Holy.” The rest though are mysteries that feel both historical and fresh at the same time, making me want to check out the originals. It should come as no surprise that every track on the record had me bobbing my head along to the groove. Heck, it even calmed me down as I wrote this post in a coffee shop right next to a pair of teenagers who couldn’t keep their paws off of each other and kept playing with the girl’s hair RIGHT NEAR MY COFFEE. Okay, well, it didn’t calm me down too much I guess.

If you’ve never gotten into but always been curious about soul music of the 60s and 70s, The Roots or John Legend, Wake Up! is essentially the perfect mix of all three. The record can act as a gateway, but also stands as a fantastic, sometimes funky sometimes mellow but always sonically pleasing  listening experience for pretty much any kind of mood. Feeling down? This record will cheer you up. Feeling good? You’ll feel even better. Seriously, the original track “Shine” is really helping to calm me down about those teenagers. They left by the way. Good thing too, or I was going to blare Husker Du in their ears. In conclusion, Wake Up! is a rad record, but it will not help you chase away teenagers who won’t stop playing with their hair. It will probably just make them want to make out, which is far worse. This ends the review as well as the cranky old man portion of the proceedings today.