Once I decided to dive into Brian De Palma’s films as part of It’s All Connected 2020, I had to figure out which ones leaned towards horror and which of those happened to be streaming right now. That got me to 1980’s Dressed To Kill which is currently on Amazon Prime. Now, compared to Phantom Of The Paradise, Carrie and The Fury, this film might just barely qualify as horror (most would probably go with the “thriller” label), but it certainly got me thinking, so here goes!

END_OF_DOCUMENT_TOKEN_TO_BE_REPLACED

Man, Christine was a disappointment. I knew it was based on a Stephen King book, so that’s usually a hit or miss type thing, but then I saw that John Carpenter directed it. Holy cats! This has GOT to be great, right? Nope. Maybe it’s because I’ve seen a few killer car movies and they’re all pretty much the same, or it’s because Carpenter doesn’t come anywhere near the intense emotional heights that movies like Halloween, Assault on Precinct 13 and The Thing do. Sure, Carpenter has his movies that aren’t that great, but I figured, that, since was from that same time period, we’d be good to go. Nope.

The story revolves around a nerdy kid who feels himself drawn to this beat up old car called Christine. He buys it and it immediately starts conflict with his parents who don’t want him to have that eyesore outside. So he stores it at a junkyard where he scavenges parts to fix it. Soon enough he’s done and becoming more and more of a 50s era greaser tough. After that the car starts taking revenge on some of his (and her) enemies.

I think my biggest problem with the kill scenes is that they seemed easily avoidable. At one point, the car squeezes it’s way into a loading dock where a victim is just standing there. The car has to force itself in and ends up squishing the kid, but here’s the thing. There was PLENTY of time for that dude to jump up the car and run across it. There’s another scene where a guy’s sitting in the car and it pushes the seat up into the steering wheel and crushes the guy (after locking the doors). This just seemed lame and boring and obvious all around, but they did it anyway.

There were some good things though. I liked the performances. At first you’re agreeing with the nerdy kid. His parents are pretty hard on him even though he seems to never cause trouble. I also liked the subtle transformation from nerdy dude to greaser tough even if it seemed a little too on the nose. There are also some pretty cool special effects. The car can reform itself because…well, we’re not really sure why, but it does and it looked really cool. Meanwhile, there’s another scene where the car, which is on fire drives over a guy and he catches on fire. That looked pretty cool, but by that point I wasn’t really into it anymore and it was just a cool spike in an overly dull movie. Totally bummer.

Thankfully, I had better luck with The Legacy, which I added to the top of my Netflix Queue after reading that Sam Elliott was in it over on Horror Movie A Day. Even though I had read the review the week before, by the time I got the movie, I remembered nothing about it, except that the star of Frogs and Road House would be in it.

Thankfully, the movie delivers out what it promises: Elliott’s awesomeness. He’s the boyfriend/husband of Katherine Ross who was the main character in the original Stepford Wives. Somebody in England sends her some money and asks her to come out to a big old mansion there, so they do. There are a few other people there, all of whom seem to be kind of assholes in one way or another. One of those characters is rock star Roger Daltry playing himself kind of in the form of a character called Clive Jackson. I got a chuckle out of the fact that this was my second movie featuring a rock star in it in a week (Gene Simmons was in Runaway).

From there people start dying and things get weird. It turns out that the dude who owns the house gave everyone a ring that can’t come off. He looks kind of like a demon. At first Ross is freaking out and Elliott doesn’t really believe her, but then really strange mystical type things start happening, like when they try to drive out of town and find themselves on a giant loop, ending up where they started.

Let’s call this SPOILER territory. It turns out that the old guy has the power of Satan. In order to pass it along to his descendant (which is Ross), so all he has to do is kill off the other ones and the power will pass on to her. Then, she needs to do the same thing and on and on and on. I liked that the movie ended on kind of a creepy weird note with Ross stating that she can now do whatever she wants. She didn’t flip the script and say she was going to be a good guy, but also didn’t straight up say she’d become a big Satan-powered crazy herself.

I just want to mention a few other things. First off, The Legacy was directed by Richard Marquand who also directed Return Of The Jedi! If you had asked me who actually directed Jedi, I don’t think I could’ve actually told you. Now I’ll at least know that it was the guy who did The Legacy. Also, it’s based on a book which I’m kind of interested in checking out, which gives it something in common with Christine. Finally, both The Legacy and Christine have crazy Polish posters, which you can check out here: 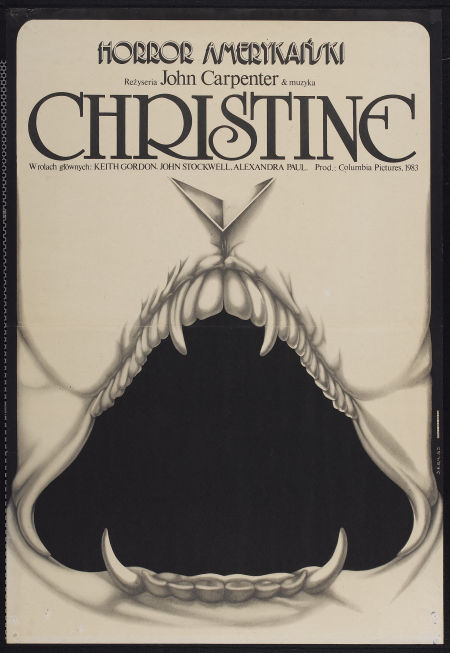