You want links? I got a couple! You can read my Looper Heathcliff article here and check out my original review of the Gotham By Gaslight comic here! 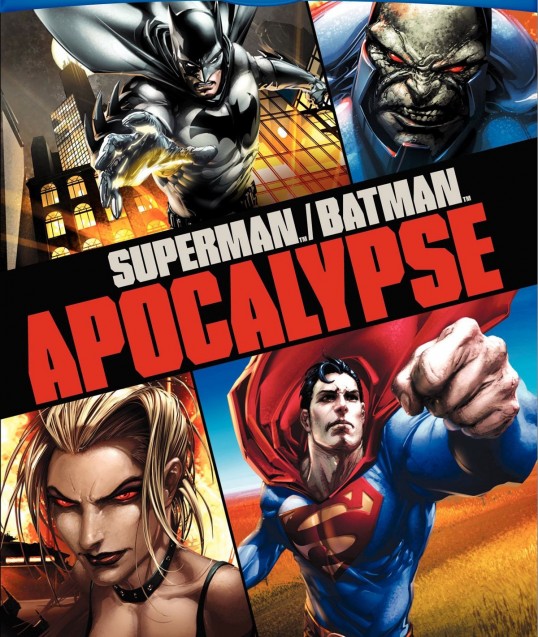 The DC Universe straight-to-DVD movies from Warner Bros. Animation have been killing it lately. I still haven’t seen Batman: Red Hood even though it’s on Netflix Instant, but I’ve heard good things and had a great time watching Superman/Batman: Apocalypse. It’s kind of interesting that they’ve created this little sub-universe of movies based on Jeph Loeb’s Superman/Batman run which started with Public Enemies, a movie I liked a lot much to my surprise.

I was not surprised at all that I liked Apocalypse. the run of the comic that the movie is based on is one of my favorite guilty pleasures of all time. Superman, Batman, Woonder Woman and the Amazons facing off against an army of Doomsdays? Perfect. Batman racing around on Orion’s Astro-Harness? Awesome. Batman punching Darkseid in the face and using his smarts to get what he wants from the villain? Amazing. It’s probably my favorite comic by Loeb and definitely my favorite Michael Turner-drawn book.

And the movie doesn’t disappoint, even though we don’t see Batman punch Darkseid. The flick does a great job with the action sequences and thankfully takes out that ultra-lame speech Superman gives Darkseid in the last issue about Supergirl not being able to eat apple pie or whatever. I actually got chills when it was time for the Doomsday fight. I got such a kick out of the idea of a legion of the creature that killed Superman fighting some of the toughest women in the DCU plus Batman. Overall, I had a great time with this movie and it made me want to get my hands on the trade again (I swapped it a while back after a somewhat ill-advised shelf purge), which brings the WB good list up to include New Frontier, Green Lantern: First Flight, Wonder Woman, Public Enemies, Crisis On Two Earths and now Apocalypse with the only stumbling blocks in my opinion being the first two attempts: Superman/Doomsday and Batman: Gotham Knight. Even with such a great streak going, I’m nervous about All-Star Superman because the original comic is such a masterpiece. Can’t wait to see Green Lantern: Emerald Knights (longs as it’s better than Gotham Knights) because I’m all for more GL. I’ve yet to see any of the shorts yet, how have those been?

I’ve been watching a lot of animated comic-based movies lately for a top secret project (not really, it’s a list of good and bad straight-to-DVD superhero cartoons). With the holidays and Netflix not being able to ship me the Christmas movies I wanted to check out like Santa Claus: The Movie, I ended up with a stack of these things and figured today would be a good day to go through some of them. Hey, the sooner I turn the article in the sooner I get paid.

I actually used to have a copy of Hellboy Animated: Sword Of Storms (2006) in my possession from my Wizard days. I thought I still had it, but must have passed it to someone else or put it on the free table. Anyway, after not really liking Hellboy 2, I wasn’t too interested in delving into that world anymore (yeah, I know this DVD came out before the sequel, but I hadn’t watched it yet), but I want to be complete any time I work on one of these lists, so I gave it a shot. And, as it turns out, I like this animated feature more than either movie.

Sword Of Storms captured the character of Hellboy who I love from the comics much better than the films, even though the voice cast carries over from the movies with Ron Perlman, Doug Jones and Selma Blair coming back to voice Hellboy, Abe Sapien and Liz Sherman respectively. Oh, plus, you get a nearly panel-for-panel interpretation of the “Heads” story from the Chained Coffin And Other Stories TPB, which was a nice surprise.

The animators also did a pretty good job of nailing Hellboy creator Mike Mignola’s style when it came to a few of the background and attacking characters like corpses and mummies. Aside from that, though, the animated versions of our well known heroes all looked pretty different from the comics. There’s a lot of good, weird Hellboy moments like a woman playing a stringed instrument until her fingers bleed and a talking fox that remind me more of the comics than the movies, which is nice.

Plus, Kate Spencer is actually in this one and she’s voiced by Roz from Frasier, also known as Peri Gilpin. I will say that the movie felt a little long and somewhat aimless at times, though that might be more a product of the comic-like story and Hellboy’s wandering journey through some kind of ghost dimension. Oh, and there’s a psychic B.P.R.D. agent who I wanted to punch in the face because he was too cartoony and over-the-top. Had they toned him down a bit, I think the overall film would have been much better.

Up next on the double feature was Batman: Mystery Of The Batwoman from 2003, which I didn’t find nearly as fun or entertaining as Sword Of Storms. See, the plot almost exactly follows that other Batman animated movie Mask Of The Phantasm, which I didn’t like much either.

See, Batwoman’s out there causing trouble and it just has to be one of the three new female characters introduced in the first 15 or so minutes of the movie. Batman also seems to fall for the most obvious person potentially responsible without really questioning it or looking into it too much. And guess what, he’s right because SPOILER WARNING it’s all three of the new female characters wearing the costume. I didn’t see that coming by any stretch, but it also wasn’t that surprising because you KNOW it’s got to be one of the three female characters.

There were some fun fight scenes and action sequences, but overall it just wasn’t all that fun to watch. Plus, they decided to cast David Ogden Stiers as the Penguin and redesign him while all the other characters retained their voice actors and the appearance they had in the Animated Series’ later relaunch. I will say that the design on the Batwoman costume was fun, even though it’s really really similar to the on from Batman Beyond. It should be noted that TAS masterminds Paul Dini and Bruce Timm had nothing to do with this movie, at least as far as the credits on IMDb go, so that might explain why the quality isn’t as high as those cartoons. Ah well, it wasn’t a complete waste of time and definitely isn’t the worst of the animated bunch I’ve ever seen. Hopefully everything from here will at least be a little better though. 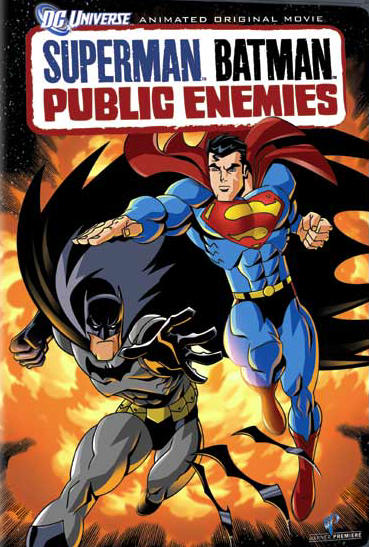 So far we’ve gotten six offerings from DC’s animated universe straight-to-DVD movies. Here’s how they break down for me:

The bad ones are bad either because they strayed way too far from the original concept (Superman/Doomsday) or were just plain old boring (I think you can figure out which one that is). The good ones either stick to an existing story or create a brand new story using the basic mythos. For whatever reason, I had some pretty big reservations about Public Enemies. Maybe it’s because I wasn’t a big fan of the comics the movie was based on. Jeph Loeb’s Superman/Batman (or as Em calls it SuperBatman) was a big fun popcorn comic that was dragged down by the interminable thought boxes he through in so that you could see how Superman and Batman think about each other. It was SOOO boring.

Anyway, after watching PE last night I would definitely put this one in the good column. I’m not a big fan of mixing the voice talents of previous incarnations with a different art style. I keep hearing Kevin Conroy as Batman and Tim Daly and expecting to see the classic Batman/Superman/JL/JLU versions of these characters. It’s a small complaint and really the only one I’ve got. I like how they used Ed McGuinness’s art to base the animation on, though it could have been a little bigger. The basic story follows that of the comic: Lex Luthor’s president, he’s got some heroes and villains working for him, tries to turn the world against Superman because there’s a big Kryptonite meteor coming towards Earth and Superman and Batman have to put a stop to it.

It’s been a while since I’ve read the comics (or more accurately looked at the pretty pictures) so I can’t remember how closely the movie mirrors the comic. You don’t get a teaming up of Superman and Batman’s family of heroes coming to the rescue, but you do get the fight between the dynamic duo and Hawkman and Capt. Marvel. There’s also a JLU-worthy fight in the episode where Supes and Bats fight a giant army of villains because Luthor put a bounty on Supes’ head. While the action scenes are a lot of fun, I’m not sure how well the story is told. It’s hard for me to judge because I did read the comics and all the comics from around that time, so I’ve got a lot of extra info bouncing around my head. I think Em had a pretty easy time following, but again, she’s read a lot of that stuff too. Then again, I don’t know how many non-comic fans will be checking these DVDs out. Hopefully a good deal will, then they’ll fall in love with these characters and start following their adventures in comic book form. Ha, who am I kidding? That almost never happens for ongoing comics.