Another day, another pile of trades! This time around I’ve got a very cool haunted house story starring a longtime DC scare characters, a comic adaptation of a film I haven’t seen and a trip to Mega-City Two  drawn by one of my favorite artists working in comics now!

END_OF_DOCUMENT_TOKEN_TO_BE_REPLACED

As I mentioned in my list of favorite reading experiences of 2012, iZombie has quickly become one of my favorite comic read experiences around (check out my reviews of volume 1 and 2 if you’re so inclined). I wrote in that post, “This series is the rare mix of intriguing characters, wacky situations, rock solid architecture and mythology I want to study PLUS one of the greatest artists the medium has ever seen.” That feeling continued into this third volume as all kinds of craziness goes down and we’re even introduced to a whole new team of characters called the Dead Presents who seem pretty important to the overall narrative. I think it’s a great sign when a book like this heading into its final arc doesn’t shy away from introducing new characters, especially ones that I’m so intrigued by.

One of the keys to this book, in addition to the mythology and characters is that Roberson does a great job of giving everyone a secret, one that you don’t necessarily learn the truth about for issue after issue. I mean, I’m introduced to Gwen in a broad way in the first volume and she explains what her deal is, so I’m on board. I like the character and I’m along for her adventures. But most of the give information at that point has very little to do with her pre-undead life. The realizations and reveals that come from that aspect of her were great and almost unexpected because I was so invested in this character that I forgot that I know almost nothing about her.

This volume is all about answers and reveals while still leaving plenty of large question son the table like what will happen between Gwen and Horatio now that he knows the truth about her? How will they stop the zombie outbreak? What’s the deal with the Dead Presidents?  What’s up with Gramps? Ahhh, there’s so many questions. Even though I read this book a while ago, I’m still excited about it and getting my hands on the last volume to see how everything wraps up.

Another favorite discovery of last year was Scott Snyder’s American Vampire (check out my review of the first volume here). This volume focuses on Las Vegas lawman Cashel McCogan in 1936. He’s a good man doing his best in a place overrun by bad folks. In addition to the run of the mill monsters you might expect, he’s also got a nasty vampire problem on his hands that will reveal dark secrets about Vegas and lead to dark personal realizations for McCogan himself. I don’t want to get too deep into the details for fear of spoilers, but the payoff to the second page in this collection that finally reveals whats in his backup is pretty amazing and disturbing.

The story also circles back around and shines the spotlight on volume one star Pearl and her man Henry who discover along with the audience that there’s an organization out in the world dedicated to destroying vampires. They actually want to test Pearl in exchange for supposedly never bothering her again, but Pearl is understandably wary. And, of course, we get more Skinner Sweet, the OG American Vampire.

Much like iZombie, this book is so great because the characters feel real and robust, the setting is intriguing, the action is intense, the art is rad and the horror fits with the subject matter. I want to dive into this world and soak up every drop of story. I’m excited to get my hands on the remaining books. 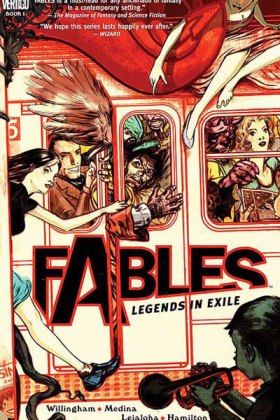 Fables is one of those Vertigo books that I’ve been hearing great things about for years. One of the guys I used to work with at Wizard would devour the new issues every time they came out and I was at a party once where a woman read through the first volume in a corner while everyone else stood around, drank and talked. I thought that was pretty weird, but I figured it indicated something interesting about the book. Even though I hadn’t read it, I knew the basics: all the storybook characters you’ve read about are real and in our world for some reason. Why did I finally decide to check the book out? Well, it’s mainly because of Once Upon A Time, a show I really enjoy that has very similar themes.

In fact, I think watching OUAT has gotten in the way of my reading of this book because I compared every character in the comic to their counterpart in the show. I wasn’t doing it in a “This was ripped off” kind of way but more of just a constant comparison which got kind of tiring.

I also wasn’t super interested in the story of the first arc which revolves around Fabletown’s resident PI Bigby Wolf trying ro figure out who killed Rose Red (Snow White’s sister). The whodunit is kind of a perfect way to introduce the reader to a group of characters who will go on to be major players in the comic (I assume), but I had two problems with this set-up. First, I didn’t know Rose Red at this point and therefore wasn’t really invested in finding out who killed her. Sure, her sister was upset and wanted to find out what happened, but something just didn’t land with me and get me super involved. The other problem I had was that I figured out the big twist pretty early on, so a lot of the procedural stuff wasn’t super interesting. To be fair, I’m not sure if I actually parsed out what was going on or had the answer rattling around in my head.

So, at the end of the day, I wasn’t super absorbed by this first Fables outing. I’ve got the second and third volumes thanks to a Swap, but I’m probably going to knock out a few smaller books as well as the next Y: The Last Man Deluxe hardcover before getting back to them. Maybe I’ll wait til Once Upon A Time‘s season ends to avoid some of the comparisons. 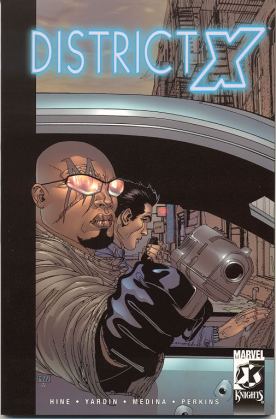 I have a weird relationship with cop-oriented superhero comics. The first few volumes of Powers didn’t do it for me, neither did the equivalent of Gotham Central trades. Top 10 blew my mind the first time I read it, but it don’t hold up nearly as well upon re-reading. These things were going through my mind when I read District X Volume 1, a book that followed Bishop teamed up with a regular cop in the Mutant Town section of New York City. I was once again intrigued by this concept, but wasn’t sure if I’d dig it.

As it turns out, I did. See, one of my problems with the cop, crime or espionage comics is that I can just as easily see these kinds of stories in a movie or TV show. I know comics are versatile, but if you’re dealing with something relatively low budget like a revenge story, I’d kind of rather see that on a screen, unless it’s something with a ton of style like Sin City. District X understands that, while it is “NYPD Blue meets X-Men,” that doesn’t mean you can’t go bonkers with what happens and David Hine does that in these pages.

I mean, this book has a scaly fish lady who swims at a strip club, a woman who can make you see whatever she wants you too (also a stripper or hooker or something), a toad boy who secretes a substance used to get high off of, regular people turning into these cray branch-y creatures and a dude who can rearrange matter. I don’t know if I’d say that District X is better than those books I mentioned above, that’s obviously subjective, but I found myself liking this one a lot better. Still, reading this volume did make me want to give Gotham Central another try. 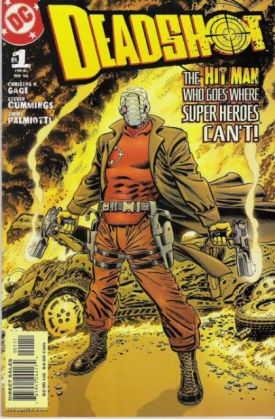 Deadshot #1-5 (DC)
Written by Christos Gage, drawn by Steven Cummings
Not a collection

I also happened to read the Deadshot miniseries from 2005, which also features comic book superheroics in a neighborhood setting. To be clear, this was not a collection, but individual issues my pal Kiel sent me that I’ve been waiting to dive into. In this five issue series by Christos Gage and Steven Cummings with Jimmy Palmiotti on inks, Deadshot discovers that he has an illegitmate daughter he didn’t know about. He visits the former-prostitute mother who has cleaned up her act and tries giving her money to move out of the slum they’re living in, but she refuses. So, Deadshot sticks around, kills a bunch of gang members and does a pretty great job of cleaning up the neighborhood.

It’s kind of a smaller scale Punisher that actually works. There are ups and down, but the way Gage handles Deadshot is so clear and concise with a well thought out plan that seems like it would really work in the real world. Kill some gang members and they’d be afraid to come back. If the gangs are no longer interested and the inhabitants start cleaning things up, that might attract new homeowners. A well placed threat to a slumlord will also keep the people in the neighborhood in homes.

But it’s not a cake walk. Deadshot has to deal with Green Arrow (the story takes place in Star City), a bullet proof bruised named The Closer and a small army of assassins like Deadline, Javeline and a bunch of guys even this one-time, die hard DC fan couldn’t name. All in all, this is a great series that I’m surprised isn’t collected yet. Gage is a pretty big deal in the industry and Deadshot got new life with Villains United, Secret Six and then the New 52 Suicide Squad. Seems like this series would be prime for a reprint. Actually, I’m okay with it not being. I have plans for an epic Suicide Squad binding project that will include all of that series, the 80s Deadshot mini, possibly the Giffen Squad reboot and this mini. I’m pretty stoked about it actually, now I just need to get like 50 more issues of Suicide Squad.