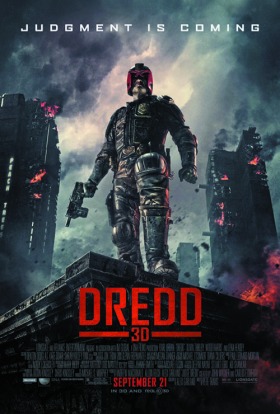 I’m turning into an old man or rather an even older man, depending on your perspective, I guess. I used to be able to stay up all hours of the night and then get up and do what I needed to do, but since our daughter has started getting up between 6:30 and 7:00AM every morning, those are days of the past. I only say all this because it wound up taking me three or four nights to actually watch Dredd. That’s in no way a commentary on the movie itself, just my inability to stay awake past midnight most nights.

Anyway, Dredd is one of those movies that didn’t seem to have much of a PR push behind it, snuck into movie theaters and did almost no business (it only made $36 million worldwide with a $50 million budget). But, the people that did see it all seemed to love it. I’ve got to agree with the folks that dug this movie because it’s pretty fantastic and requires absolutely no knowledge of the longstanding title character whose been starring in 2000 AD and the Judge Dredd Megazine over in the UK for decades.

The basic concept here is that, basically, the entire eastern coast of the United States has morphed into one giant city called Mega-City One. It’s an overcrowded  corrupt place filled with degenerates, criminals and people just trying to get by. The only ones standing between the good and the bad are the Judges, a group of law officers who not only enforce the law, but also mete out punishment according to the law. The film follows Judge Dredd (played by Star Trek‘s Karl Urban) as he trains rookie officer Cassandra Anderson (the bewitching Olivia Thirbly) who also happens to be a mutant with psychic abilities. While out on patrol they’re called to a massive building that’s essentially a project house that’s run by a drug running gangster called Ma-Ma (Lena Headey). Dredd and Anderson wind up getting trapped inside the building with Ma-Ma’s goons gunning for them and things play out from there.

Yes, it sounds like a futuristic version of The Raid, but stylistically, there are completely different approaches to the basic idea of fighting mobsters in a high-rise. While The Raid gets so real and intense that it’s almost disturbing, Dredd kept a kind of hyperkinetic-but-still-real tone that featured futuristic, voice-activated weaponry, a bit less hand-to-hand combat and more explosions and giant guns.

I haven’t seen any of Pete Travis’ other movies, but I thought he did a really killer job with Dredd. The movie keeps itself in a fairly limited locale that doesn’t require a gigantic budget but does that one location really, really well. You can tell from watching that this film was basically a test of concept for the viability of Judge Dredd in film. While it might not have been a financial success, I’d say it was a successful proof of concept. I really felt the intensity of Dredd as an upholder of the wall ans I thought Thirbly was just mesmerizing to watch and the world felt real and raw and like the kind of place that needs these kinds of protectors. I would love to see a more sprawling story set in this world, but that’s probably not happening any time soon. To feed the Dredd jones I now have, I’m trying to get my hands on the first volume of the Judge Dredd Complete Case Files, but the person I tried to buy it from on Amazon bailed on the transaction (I’m guessing because they realized the $14 book they were selling was much lower in cost than the $30 versions other people are trying to sell) and have since placed a bid on an ebay auction. We’ll see. There’s a lot there to get through, but it’s a journey I’m willing to take…if I can get the books relatively cheap.