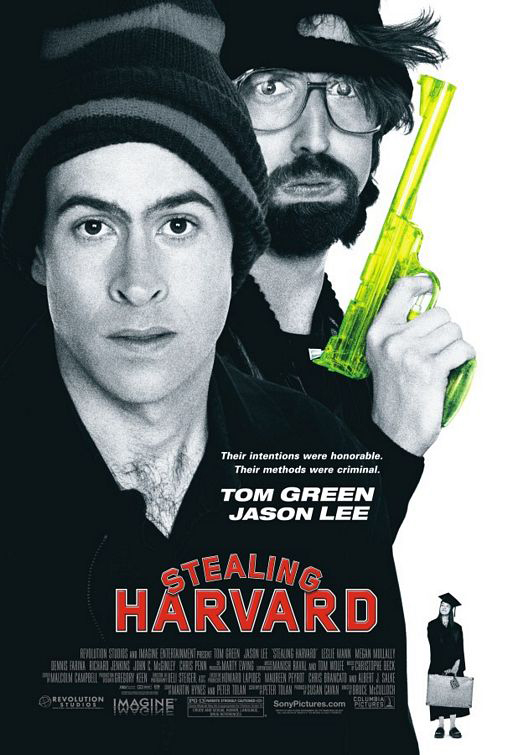 Yesterday to celebrate St. Patrick’s Day I put on my “Irish I Had A Beer” t-shirt, drank some beers, watched Stealing Harvard and made some awesome Reuben macaroni and cheese. Compared to the year I went to a funeral and the year I awkwardly sat with a coworker at a bar while everyone else was at Wizard World LA and then went home to watch Leprechaun In Space, it wasn’t too bad. Compared to some of the parties we’ve thrown in past years, not so great. Well, at least no funeral. Anyway, I wanted something fun to watch and have been wanting to check out Stealing Harvard for a while as I’m a big Jason Lee fan and was always curious about it. It didn’t blow me away, but I thought it was a pretty solid flick with a great cast.

Aside from Lee, Tom Green, Leslie Mann (one of my favorite actresses), Dennis Farina, Megan Mullalley, Chris Penn, John C. McGinley, Martin Starr and Bruce McCuloch who also co-wrote and directed the movie all appear. The idea is that Lee promised his niece that he’d pay for her college back when she was a kid and now she’s gotten into Harvard and needs about $30,000. Lee’s got the money, but doesn’t want to tell his girl Mann, because that was the magic number so they could get married and buy a house.

From there, Lee and Green go on a series of missions trying to get some green, mostly through poorly planned robberies. There’s a lot of moments where I wanted to yell “Just tell her the truth!” at the TV, but it doesn’t get to Meet The Parents levels of frustration (I can’t watch that movie or anything like it because I’m too busy cringing and getting angry). But, it doesn’t get that bad, so it’s fun. It’s also fun seeing people like Mullalley doing a different character and not being in that awful margarine commercial I’m inundated with on a daily basis. When I first saw her name after Mann’s I thought they might actually be sisters. They’re not and might not even be in a scene together actually, but I’d like to see them together.

Not a great movie, but different and silly enough to make me feel like I didn’t wasted the 80-some minutes it took to watch, so all in all a good experience. Oh, and if you’re not a Tom Green fan, he’s not as crazy as he was on his show, but more like his character in Road Trip.

I mentioned a week or two back how I had recently enjoyed several Judd Apatow-related DVD commentaries and how I was looking forward to seeing Funny People. We’ve been sitting on the DVD since before Thanksgiving, but didn’t get to it until this weekend. It was definitely worth the wait.

I can’t think of a movie I’ve enjoyed more than Funny People in a while. I went into it knowing about the basic plot details: Adam Sandler plays a big-time comedian who finds out he has a kind of cancer, takes fellow stand-up comedian Seth Rogen under his wing and starts hitting the club circuit again. Sandler tries to make amends with some people, including Leslie Mann, who is the one who got away. He eventually finds out that the experimental treatment he’s been taking has worked and he’s got a second lease on life which sends him out after Mann who is married to Eric Bana and has two kids (Mann’s own kids with Apatow).

I’m a big fan of 40-Year-Old Virgin, Knocked Up and most of the movies Apatow produced, so it’s probably not a huge shock how much I liked this movie. What I liked most about Funny People wasn’t just the comedic aspect of it (which were hilarious), but also the dramatic side. I’d seen Sandler in Punch-Drunk Love and didn’t like the movie, but I’ve always figured he could do something more dramatic and this movie proves it. In fact, everyone in the movie is hilarious. Aside from the main three, you’ve also got Jonah Hill, Jason Schwarzman, Aubrey Plaza, Aziz Ansari, RZA, Bana and the Apatow children all tossing out great lines left and right. Sure, it’s long at 146 minutes, but I think it’s worth the time investment.