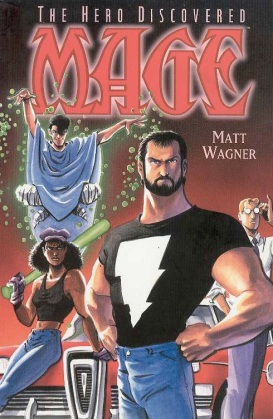 I’ve talked a lot about how influential  my time at Wizard was on my comic reading experience. That’s where I was finally able to read some of my all-time favorite comics like Preacher, Starman and Sandman along with plenty of others, too numerous to mention. Having access to what must have been one of the biggest, best and most varied comic book libraries around had plenty of advantages. As an intern I dug through books to read, but was also tasked with organizing the place. The problem? Too many comics and not enough space. The idea was that, every day, one of the interns would be up in the stuffy, hot windowless room, trying to make sense of poorly organized sections that sometimes had five copies of the same book. Keep two, get rid of the rest, that was our job. Whatever was deemed overflow, we got look through and keep.

Through that I got a box full of comics that included a big chunk of Abnett and Lanning’s original Resurrection Man series, a lot of Lobo comics that I still haven’t read and the majority of Matt Wagner’s Mage: The Hero Discovered. At that point I was mostly into superhero comics, though was checking out a few different things like 100 Bullets and other Vertigo titles along with some Cliffhanger books like Crimson, but I’d never quite read anything like Mage, which combined Arthurian legend with supernatural adventure in a way that was new to me (at least in the world of comics).

I’m not sure how or when I discovered that Defined was actually the sequel to an older series, but I eventually read that while working at Wizard, which kind of brings the whole thing full circle. In the past few years, I came across the hardcover collection of The Hero Discovered on Sequential Swap and did everything I could to get it (it’s one of the two worst Swaps I’ve ever done). I also found a copy of the Defined softcover at my local Barnes & Noble and after eyeing it for a while (and hoping no one else snatched it up between visits) bought my own copy. With both in hand it was only a matter of time until I read both books in relative proximity to one another (about two months, I believe).

The Hero Discovered — which Matt Wagner originally wrote and drew in the mid 80s at Comico — is the tale of how Kevin Matchstick started down the road of supernatural heroics. After stopping a strange creature from beating a guy up in an alley, he discovers that he’s actually the living embodiment of King Arthur complete with his own Excalibur (a glowing bat), Merlin (a wizard named Mirth) and squire (a young woman named Edsel). As anyone would, Kevin has trouble accepting this new world of monsters and magic, but eventually gives in to his in-born heroic nature and agrees to take on the looming threat of the Umbra Sprite along with his crew of supernaturally gifted pals. All of this leads up to a huge battle that not everyone survives. Truths are learned and at least some of the bad guys are beaten leaving Kevin to travel the world doing his hero thing.

In the post I wrote about Trinity and the Demon mini he did, I noted how you can really see Wagner’s evolution as an artist in those books. That is abundantly clear when you read these two Mage books. In Discovered he certainly has the beginnings of his style, but it’s not as detailed or refined. The characters all look a little more rounded-off than they do in the follow-up and his other work. I also noticed that the colors in the first book are often in the pastel family which adds a kind of cloudiness to the whole thing while Defined has a much more crisp, sharp color pallet. That sharpness caries over into the figures as well which have a lot more weight to them in this book. He also gets into more of the shadowy stuff seen in Trinity. Oh and every now and then he gives the characters Little Orphan Annie eyes which might sound odd, but they look perfect and evocative in his style.

A decade after creating the character, Wagner returned to the world of Mage in The Hero Defined, this time through Image. As I mentioned, this was my first exposure to this character. I like how Wagner doesn’t spend this entire book recapping where Kevin has been the last 10 years or so. It’s like he lived his life, took out some nasties, met some people, lost some friends and is now meeting new people and coming up against new challenges, you know, like a real person would. I liked how Wagner didn’t dwell on the past or use this story to hit the same exact notes as the first (though there are some similarities and call backs).

Kevin befriends a pair of other heroes who, like him, channel the energies and powers of classic figures of legend. Joe Phat’s a healer and a speedster a la Coyote while Kirby Hero has a Hercules thing going on, complete with required works from dear ol’ dad. This book really opens up the world of Mage as it features more heroes, more monsters and a potentially more dangerous threat.

As it turns out, something big’s going on in Canada, a confluence acting like a magnet for heroes and monsters. My only complaint about this book is that, there’s a lot of time spent building up the idea that all these other heroes are in town and not much is done with it. Kevin knows something bigger is happening and tries rallying the troops so to speak, but they’re not really into it. A few join his squad, but none go with him to the final battle aside from the pals who were on his side the whole time. I get that this is basically Kevin’s fight and the last issue really zeroes in on him, his destiny and his relationship to magic, but there was a part of my brain that kept wondering what the others were doing in that time.

When returning to a character like Kevin Matchstick and especially a book like The Hero Defined which happened to hit me at just the right time, I always wonder if the stories will hold up or if I’m looking back with nostalgia tinted glasses. I’ve got to say that, while there was definitely nostalgia involved in reading the latter book, these are still two very well constructed books that offer a lot for fans of superhero action/adventure/fantasy stories who might be looking for something a little more personal (Wagner has said that Kevin is based on himself in many ways).

One aspect that really struck me about both Mage books is how “realistic” they seem. Sure there’s ghosts and monsters and demons and whatnot, but there’s also a lot of humanity, heart and honesty in these pages. Kevin does not like his new life, but he deals with it as best he can. He and Mirth spend full pages talking about what he’s going through, sometimes with Mirth reading Kevin the riot act of the situation. While some of these text-and-balloon-filled pages might look intimidating, they feature the kinds of talks that people have with each other, even when the world is falling down around them. These talks offer our characters a few moments to slow down, take stock of what’s happening and often discover that they’ve been operating under huge misconceptions, an element you don’t find a lot in comics.

All of this points towards an idea I’ve been thinking about a lot lately which is that creator owned books have a lot more to offer than the Big Two superhero books (for me at least). I’m far from abandoning those concepts and comics entirely, but let’s face it, if a person is creating a comic from scratch and putting it on paper, there’s a creative intent there that’s admirable. That certainly happens with Big Two Superhero Comics, but there’s also a lot of filler material, books that are just there to sell, not necessarily tell the best story they can, though I’m sure the creators tried in most cases. It’s the difference between making something for creative reasons and making something to fill a space (let’s not be so naive as to say one is to make money and the other isn’t, everything that’s sold is intended to make money). Creator owned books also just have more room to flex and explore as they see fit, something that can get lost when working on someone else’s characters.

Ever since I first found out that Discovered and Defined were supposed to be part of a trilogy, I’ve wondered when Wagner was going to actually announce the third series. As far as I know, there haven’t been any updates in that field, but I hope he does get to it eventually. The second book does have a very satisfying conclusion as far as I’m concerned, but I’d like to pick back up with Kevin another 10-20 years down the line and see what he’s up to.