I’m not sure if Memento or Insomnia was the first Christopher Nolan movie I ever saw. I think it was when I saw 2000’s Memento my freshman year (2001-2002) of college (on DVD), but I’m not 100% sure on that because I definitely saw 2002’s Insomnia in the theater while home from college. Of course, I had no idea who Nolan was at the time, but both movies greatly affected me. I had seen plenty of movies that play with viewer perception before seeing Memento (like Usual Suspects or Lost Highway), but it quickly cemented itself in the vaunted list of movies that are awesome. After seeing Inception last night I thought about watching both movies again, but the thing about Nolan films is that they’re incredibly intense. After watching his movies, you not only feel like you’ve gone on a journey with the lead, but also feel drained because of it. With that in mind and the lateness of the hour, I decided to do something else and checked out his first feature-length movie called Following (1998) on Netflix Instant.

But first my thoughts on Inception. Don’t worry, there aren’t spoilers in here, but if you’re like me, you might want to keep avoiding any and all talk of the movie before seeing it so nothing gets ruined. I recommend that, actually. Anyway, I loved this movie. It’s just so versatile. The dream stuff is fascinating and really well thought out (you can tell Nolan has worked everything out in his head even if it’s not all on the screen). It’s just such a damn smart movie, there’s so much to think about and talk about. I just finished reading Cinematical’s list of theories and plot holes about what was actually going on. Honestly, though, I don’t really care. I just enjoyed sitting there and absorbing the whole experience (though the theater we went to had the volume up too loud and the screen seemed to be vibrating almost, which was less than ideal). What surprised me though was how action packed the movie was. You’ve got some superhero-ish fighting that made me wish Joseph Gordon-Levitt had played Spider-Man and a James Bondian winter assault that was just fantastic (actually better than anything in a Bond movie). And the whole thing is just so damn taut. You’re trying to keep up with the layers and the timing and the van is falling and what the hell was that and oh my god WALK FASTER! It’s really a stellar film that was expertly edited.

Okay, I can’t completely avoid SPOILERS, so here’s the only problem I had: how come the kick of flipping in the van (in the accident, not when it went off the bridge) didn’t wake anyone up? Also, how does a kick work if your physical body isn’t being kicked? I understand that the sedative allows inner ear functions to stay intact, but if you’re asleep in the dream world (which would put you two layers down) why would a kick work on you, especially if your inner ear isn’t actually being effected because you’re flying on a plane? I’m not saying these are plot holes, just things I didn’t get and might understand better when I watch the movie again, which I most certainly will when it comes out on DVD. For now, though, I’m just going to let it marinate. 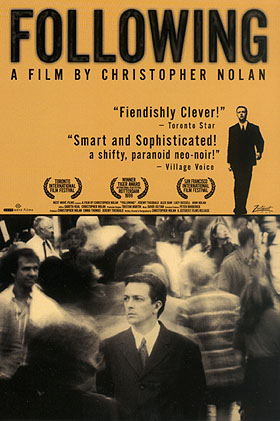 I’m still kicking around the idea of doing a Nolan marathon thanks to Memento and Insomnia being on Netflix Instant and his two Batman flicks being in my DVD collection, but instead of watching something I’d already seen, I went with Following, a movie about a writer who winds up following a thief who befriends the writer and teaches him the ropes of breaking and entering. The film doesn’t have the same heady concepts as Nolan’s later films, but it’s by no means your average film. There’s a lot going on here with scenes being told out of chronological order, characters changing appearances and, as you might expect, bad things happening to the male lead.

I’m not sure if it’s the black and white-ness of the movie or the big city setting, but the movie kept reminding me of Darren Aronofsky’s Pi which came out the same year. They’re very different movies told in different styles, but they feel thematically similar as the two leads are following their obsessions down roads that get them into some trouble.

I really should give the movie another watch because I was kind of tired and not giving it my absolute full attention, but I think I ended up understanding the whole thing after some initial confusion (thanks to the non-linear storytelling).

Nolan’s first and last movies are pretty different, but you can tell they’re made by the same guy. With both movies, he starts chronologically later in the story and then jumps backwards in time to explain things. With Following, it’s the main character actually telling someone else what’s going on, with Inception, it’s in medias res and we eventually catch up. I’ve always been curious about this form of storytelling because it contains a bit of a spoiler, but you don’t really understand it until later on. For instance SPOILER in Inception, we see old Saito in the very beginning. We don’t know what it means at first, but once we’re told that dying in the dream world puts you in limbo where you get old and crazy, we know exactly what’s going to happen to Saito, so you spend the rest of the time he’s around wondering when he’s going to die. I wonder why some storytellers reveal their hand like that, but Nolan–in both movies–does an excellent job of dropping you into the story, giving you some clues and giving you so many other things to think about that you tend to forget those opening scenes, sometimes desperately trying to remember them to try and figure out what’s happening (were those his kids on the beach? did we see their faces? what happened to the top when the old man spun it? and on and on and on).

Writing this post has made me want to watch his filmography again which I could do today if the mood strikes. The only movie I don’t have easy access to is The Prestige, but that’s okay, 6 out of 7 ain’t bad.

UPDATE: Just saw that Insomnia actually isn’t on Netflix Instant. Not sure if I completely made that up or what, but sorry about the misinformation.