Back around the time the missus and I watched Veronica Mars (can’t remember if it was before or after we finished), we gave the first three episodes of the British series The IT Crowd a shot. It didn’t really take. But, earlier this week I was looking for something to immerse myself in and decided on this geek-centric after some Netflix Instant queue flipping. I’m really glad I did.

If you’re unfamiliar, the show is about the information technology guys at a big company and their newly hired boss who knows nothing about computers. Chris O’Dowd (who played the cop in Bridesmaids) stars as misanthropic Roy alongside Richard Ayoade’s ubernerd Moss while Katherine Parkinson plays the role of their bosslady (ie relationship manager). The show revolves around their misadventures in world that doesn’t understand them or their business (every time someone calls for computer help, they automatically ask if the clueless victim has turned the computer off and on again). There’s also enough geekery of all sorts to be found on set to keep you busy for a year from indie art all over the walls and comics being read by Roy to all the tech jokes you can handle. One episode revolves around D&D while a few others around British TV shows. There’s even an extended A-Team bit!

So why didn’t I like the show right off the bat? Well, those first few episodes are kind of dumb. Have you ever seen Extras? Remember how Andy got that show When The Whistle Blows that was a workplace comedy set in pretty much one big room and corny catchphrases were being bandied about like badminton birdies? Well that’s what The IT Crowd seemed like at first. I don’t really have a problem with broad comedy like that, but it wasn’t what I was expecting. People I know and whose opinions I agree with really dug this show. Really? THIS show?

I don’t think there’s anything particularly game changing between episodes three and four, but maybe I was just in a better mindset when I turned the fourth episode on this week. Maybe there’s a huge jump in quality or comedy between those episodes. I’m not quite sure. Maybe I just said “screw it” and let myself enjoy these goofy characters who can’t really seem to catch a break. While I did wind up quite enjoying the show, I can’t say it ever really broke away from the goofiness that Extras was poking fun at. There are some eye-rollingly dumb moments, but then they’re followed up by a joke so brilliant I couldn’t stop laughing. 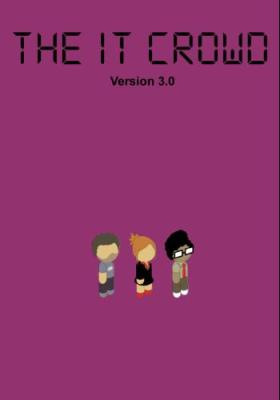 I’m not familiar enough with British comedy to know whether the brains behind The IT Crowd dressed their wolf of a comedy up in trite sheep’s clothing or not. It’s definitely possible. They might be playing with the form or expectations or whathaveyou. It could also be one of those situations where maybe one writer in the room is completely brilliant and tosses out all the best lines. Who knows? You also can’t discount the performances by O’Dowd, Ayoade, Parkinson and their co-workers and bosses. These people sell the joke and the goofiness and even revel in it when appropriate. O’Dowd carries himself perfectly as a man who acts like he’s better than normal people but also really wants to fit in with them. Ayoade doesn’t care about fitting in. He lives with his mom, sports a child’s backpack and runs like he’s still in kindergarten, but he’s also quite smart. Meanwhile, Parkinson has such a way about her. She’s smart and conniving and understands people, but never really utilizes any of those skills to improve her station for very long in life. Gnarled toe episode aside, I think she’s also got a kind of sex appeal that only comes from funny, confident (and possibly only) British women who aren’t afraid to really go for that gag.

In addition to the people being well thought out and put together, I also find myself fascinated by the sets, specifically the IT department’s subterranean headquarters. As I said above, there’s all kinds of art, comics, toys, games and tech strewn about, but to make the “what’s that?” game even more entertaining, things move around the set. The sets also seem to get a big change-up between series’ which reminds me of my days working at Wizard. I wound up being in a lot of different offices, but I had a lot of fun decorating each one with pages ripped out of comics, drawings from friends, magazine ads, posters and a small army of action figures displayed on the desk. Even Jen’s not-geeky office evolved from a dank closet to a pretty normal looking business office (with it’s fair share of art and what not on the walls too). There’s a lot to be said about a set that looks so real and can also be shot from a series of different angels. Sometimes it took me a while to figure out where the heck they were in that big space.

As I mentioned, the first four series’ of the show can be found on Netflix Instant and there’s only six eps per series, so check it out won’t be a huge time suck. I think you’ll enjoy it if you can get pass some dumb, silly jokes. It’s worth it to get to the genius ones and I say that as a person who despises slogging through bad episodes to get to the good stuff. There’s lots of goodness in the first few episodes, it just gets way gooder as it progresses.