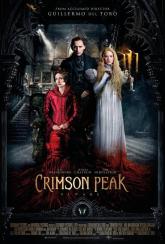 Not a day goes by that I don’t think,”Gee, I should blog about this thing I just read, watched or saw that I really dig.” For me the reason for this blog is two-fold. First, I want to let people know about cool things that they might also enjoy. The second is as a kind of pop culture digital back-up memory. With both goals in mind, I think I’ll take to this format of quick hits every week (maybe, we’ll see).

END_OF_DOCUMENT_TOKEN_TO_BE_REPLACED

Tonight the missus and I decided to do something we don’t do often: go to the movies. It’s not that we don’t like going to the movies, it’s just that we prefer to go and see something big and crazy and exciting instead of the usual winter fair. Seeing as how we’re both Tim Burton fans (as you know, I find him awesome) and Em was pretty interested it seemed like a no brainer for us to check this one out. Assuming the 3D would add to the experience, that’s the way we went.

Unfortunately, neither of us liked the movie too much. For one thing, without doing any research, I’m pretty sure that this is the kind of movie where they just separated the foreground from the background. It looked marvelous, but with the glasses on I had trouble focusing on scenes like when Alice falls down the rabbit hole, but more on that later.

The main problem I had with the movie was a lack of emotional connection, which is funny because, according to the IMDb trivia page for the movie, that was a big focus for Burton. Here’s the full text from the segment: “Despite the fact that there have been many other Alice in Wonderland films, Tim Burton has said he never felt a emotional connection to it and always thought it was a series of some girl wondering around from one crazy character to another. So with this, he attempted to create a framework, an emotional grounding, which he felt he never really had seen in any version before. Tim said that was the challenge for him – to make Alice feel like a story as opposed to a series of events.”

To me it seemed like the movie relied solely on very basic storytelling and character traits as well as previous versions of the movie to establish an emotional connection to the characters. Sure we get that the Red Queen is a bitch. She’s probably the most developed character thanks to all of our encounters with her and what we see of her palace (she has monkeys holding up table tops and lights in every room she’s in, presumably just to be a pain in the ass). But why should I care about Alice? Because she’s a non conformist in stuffy old England? Maybe I’ve seen and read too much, but that’s not good enough for me.

I can’t say exactly what I didn’t like which probably makes this a bad review, but there just seemed to be something lacking that other Burton movies haven’t lacked, even Sweeny Todd, which I didn’t like had more depth of character. If you can see the regular version without the 3D glasses for a cheaper matinee or a cheap theater, I’d recommend it, but I don’t feel too happy with dropping $21 on this movie. It might actually be worth it to see the Tron Legacy trailer in 3D.

I do want to comment on the actual 3D experience. The only other movie I’ve seen in complete 3D at the theaters was Avatar. Now, while Avatar did a better job with the 3D itself, I liked the experience of watching the Disney 3D better. The glasses themselves were different, more futuristic and less Buddy Holly, but when I put my glasses on underneath them, I could actually see unlike with the Avatar glasses which gave me a headache. I’m sure if this whole 3D thing takes off we’ll have prescription 3D glasses which I would like to pick up a pair. If they’re cheap enough. Or maybe lenses you can just clip on. That would work.