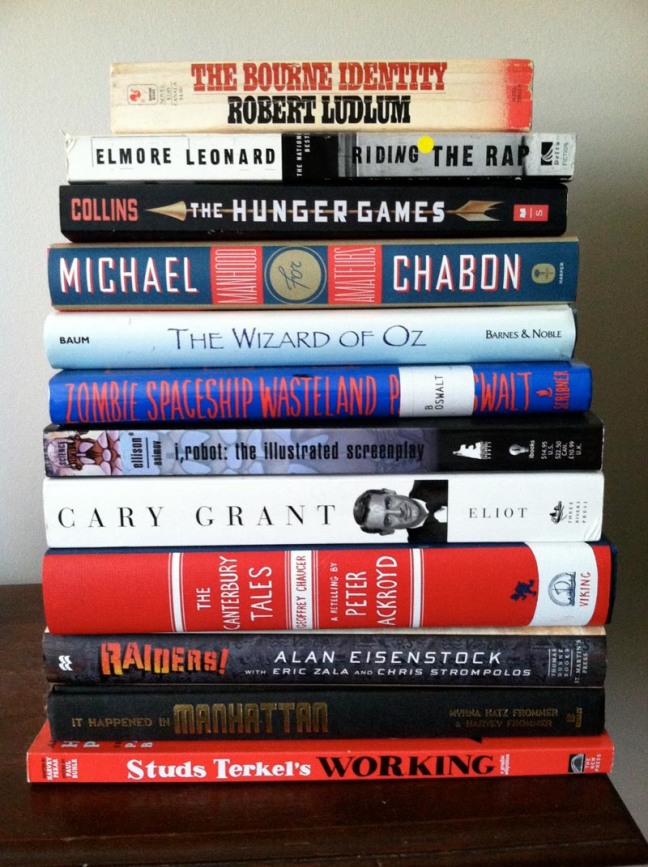 Long before I finished Please Kill Me, I was working on creating my next Ambitious Reading List. As I said at the end of that review, I’m a big fan of this much-smaller version of my larger to-read pile. Helps me stay focused while also keeping my interest not only in reading, but in crossing one book off the list and moving on to the next. Most of the books in this pile are newer to that pile, but there are a few that have been sitting around for a while too.

From the top, I picked up Robert Ludlum’s Bourne Identity at a flea market out of sheer interest based on the Matt Damon movies. I can’t keep the straight, but I’m curious to see how this book compares to the movies as well as an audiobook version of The Bourne Legacy that we finished recently and will review soon. I’ve also got an Elmore Leonard book called Riding The Rap in there. I bought this for $2 at a used book store based solely on Leonard’s name. Love that dude’s books. After that is Hunger Games, which my wife read and liked. My last ARL got in the way of me reading this over the summer, so I included it this time. I hope to compare it to the movie somewhere down the line too.

I actually started reading Michael Chabon’s Manhood For Amateurs around the time our daughter was born, or maybe just before. It’s a great book of essays I’m looking forward to finishing. I’ve been living a lie with Wizard of Oz, keeping it on my shelf since high school without every reading the whole thing. I plan on remedying that and also telling a pretty great story about the signature I have in that book. After that it’s Patton Oswalt’s Zombie Spaceship Wasteland which I got from the library for a list I was working on before my pal Rob Bricken moved from Topless Robot to io9. I have no idea where that list will lie, but that’s the first book on the pile I’m reading because I’m lousy at getting books back on time.

From there I’ve got the illustrated version of the unfilmed Harlan Ellison script based on Isaac Asimov’s I, Robot,Marc Eliot’s book about Cary Grant which I got because George Hamilton made him sound really interesting in his book and Peter Ackroyd’s retelling of Geoffry Chaucer’s The Canterbury Tales. I read parts of the original in college, but could barely get through it, man.

I got Raiders! thanks to a PR email letting me know about this book about the guys that made the 80s Raiders of the Lost Ark fan film. Then I’ve got It Happened In Manhattan, an oral history about the Big Apple by Myrna Katz Frommer and Harvey Frommer and finally Harvey Pekar’s graphic novel adaptation of Studs Terkel’s classic look at careers, jobs and Americans Working. As you can see, it’s another eclectic mix. I’m pretty jazzed to be adding a few different formats (screenplays, essays, graphic novels) and also think that this one might go a little bit quicker than the previous one, assuming I still have time to read. The next few months are going to be pretty busy/crazy. 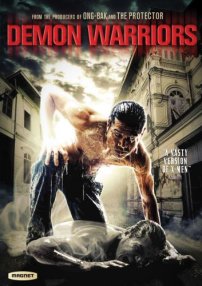 As much as I’d like to say I finish everything I start, that’s just not the case. Well, it is professionally speaking, but not when it comes to watching movies and reading books. I can sit through some pretty bad nonsense when it comes to movies, but there has to be something keeping my interest for the hour and a half or more of time it takes to sit there and absorb the damn thing. The same goes for books, which I have an even shorter attention span for and take me longer to absorb. That being said, there are times when I give up and these movies and this book have made me give up…for now.

I was really interested in Demon Warriors (2007) for two reasons. 1) It’s a Thai movie and from the producers of Tony Jaa’s Ong-Bak and The Protector, two of the best action movies ever (even if they share very similar stories). And 2) It’s about people with superpowers. Seems like a pretty damn awesome combination to me. But, hey, it’s not. The story is overly convoluted with a story involving people who commit suicide only to come back with these fantastic, yet cursed powers. Most of them seem to be pretty bad dudes, but the most recent one is trying to recruit them for…something or other.

Between the story being nearly incomprehensible, having to sit through melodramatic subtitles (I watched it on Instant, so there’s no option of dubbing) and the complete lack of action, I had to turn this one off. I really gave this one the old college try. After falling asleep one night, I tried it again last night and just could not get into it. I couldn’t focus and the action was mostly uninteresting special effects and gun play, not the usual knock down, drag out fights I expect from the Thai action movies I’ve seen. It wasn’t as bad as Mercury Man, but way too boring to keep me invested.

I thought after watching the first four movies from my 50 movie drive-in collection it would be smooth sailing from there. Hell, Count Dracula And His Vampire Bride (1973) is a Hammer horror flick starring Christopher Lee and Peter Cushing set in 70s London, how could it be bad? Jesus, how could this boring turd by good? I should have read up on Hammer’s horror history on Wiki BEFORE I started the movie, because, thanks to that reading, I found out that this was Lee’s last Drac movie because he found it ridiculous. Here, here Lee!

The movie jumps from dudes wearing furry vests to women being seemingly tortured to old dudes hanging out to women being chained in basements to Van Helsing and eventually to Dracula, but by the time he finally showed up, I was so lost that I didn’t really care anymore.

It’s funny that I like vampire movies, but have yet to see a Dracula movie I liked, including the Frank Langella one. I definitely didn’t give this movie much of a chance thanks to it losing me so early and not showing me the main character, but I’ve got 45 more movies to get through and even after quitting I couldn’t think of enough to say for a Drive-In Couchfest write up.

The Card Player (2004) was yet another movie I was looking forward to watching. This time, it was because it’s a Dario Argento movie. I didn’t know anything else aside from that and the box art. After seeing Suspiria and Mother Of Tears and having, shall we say mixed feelings about both, I figured I’d be in for, if nothing else, one hell of a weird ride. Instead, Card Player turned out to be an overly long episode of CSI or Bones that seemed to telegraph the ending. I can’t tell you if that ending came to pass, but I would bet a small amount of money on it.

See, the idea is that there’s a serial killer who kidnaps random women and then gambles with their lives on online poker. For the most part, our POV is on the European cops’ side as they try to figure out who the guy is after not wanting to play the game the first time around and watching the girl get killed. It really does play out like a TV show you’ve seen a thousand times. They track down the best online poker player around and it turns out to be a kid. Later, the killer attacks the female cop in home. I’m guessing the killer succeeds and grabs her, then the male cop has to race to find her. Aside from not having any of Argento’s typical batshit elements, the film just seemed to plod along, never being better than any of the hour long TV dramas you can find anywhere on cable. The only Argento thing about the movie is that the corpses came floating up naked and they didn’t shy away from showing it. Though, after watching Bones, I’m pretty sure they could have gotten away with most of it on TV nowadays. 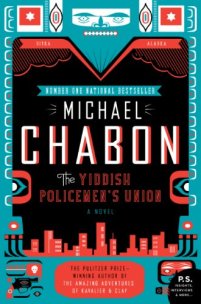 Slow burn books and I aren’t the best of friends. I’m a slow reader as it is, so if your book takes a while to really pick up and get interesting, then it might not be the best for me. Sometimes I’ll stick through a book like Brad Meltzer’s The Zero Game and come out loving the whole experience, but other times, I find myself in what I will now be calling a Michael Chabon situational where my love of a previous work can’t propel me through the murk of the current work.

Like every other geek who reads books without pictures I loved Chabon’s Adventures Of Kavalier And Clay. Eventually I found his book for kids called Summerland on sale at Building 19 and picked it up. I tried getting into it and it just never grabbed me. I chalked it  up to me not really being the audience for that book, but I’ve gone back and read Roald Dahl books and really enjoyed them, so maybe that’s not the case. The same thing went for Yiddish Policemen’s Union. I was really jazzed when I saw it on the cheap at Barnes & Noble, but I found even more indecipherable than just about any other book I’ve ever tried to read.

For the first thing, the book’s about a murder in a Jewish settlement in Alaska that will be changing in the near future. The Wikipedia page tells me that this is based on an alternate history. Me not being Jewish and knowing squat about Alaska, I kept wondering what was real and what was made up for the book. That’s okay when in small doses, but when I’m trying to figure out if the entire world the author is building is fictional or just certain parts, it takes me out of the story. Another problem I had with the book is that so many of the terms come from Yiddish and, as I mentioned before, I don’t know Yiddish. Had the book included a kind of glossary or footnotes in the back, I’d be a little more satisfied, but those two things fused the book into a large clump of denseness that I kept wanting to get through to the mystery at the heart of things, but just never could. I haven’t completely quit on this one as the book does still sit on the floor next to my bed, but I have plenty of other books to occupy my attention in the meantime. After quitting on this one, I moved to Terry Prachet’s Soul Music which hasn’t really grabbed me yet either unfortunately. In fact, I’ve moved on again to reading a book of F. Scott Fitzgerald’s short stories that I’ve been really enjoying so far, which is a relief because I was worried I might have been put off books without pictures altogether. Maybe I’ll go back and reread Kavalier And Clay when I’m done with this…or maybe I’ll work on the ever-growing pile under the bed.