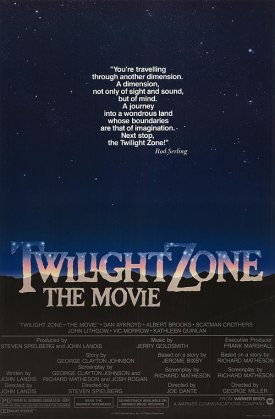 I have a few distinct memories of Twilight Zone: The Movie. When I was a kid, I have a very clear memory of watching the beginning of this movie with my dad, who does not like scary movies by the way, and being completely freaked out by that Dan Akyroyd bit in the beginning between him and Albert Brooks. That was well before I got into horror movies myself and I must say it stuck with me.

The other memory is that it’s not very good. My memory didn’t go much further beyond that, but I think it had something to do with the fact that, aside from the initial segment by John Landis, the movie didn’t do too much in the way of newness. But upon watching the full thing again recently in my attempt to go through all of Steven Spielberg’s major film efforts, I didn’t have that same problem.

In fact, the only segment of the film — four parts each directed by Landis, Spielberg, Joe Dante (who I recently realized I’m a huge fan of) and George Miller of Mad Max fame — that I didn’t like is the one by Spielberg which was pretty disappointing.

Called “Kick The Can,” the second part of the film finds The Shining‘s Scatman Crothers playing Mr. Bloom, a recent addition to a nursing home who riles up all the other old folks with talk of youth. That night, they all go out to play and actually become young again. I’m not nearly as familiar with this episode from the original TV series — which I absolutely love watching in marathon mode every New Year’s — but I can’t imagine that one is as schmaltzy and sappy as this one. Spielberg just goes overboard with the cutesy stuff and winds up undercutting his own fairly poignant story about not wanting to lose yourself to age. It’s too bad considering the other filmmakers created much more balanced offerings and Spielberg had just nailed well crafted, earned sentimentality with E.T. the year before.

Since I’m probably not going to circle round back to this movie for a while, I might as well review the other three segments. Landis’ piece about a bigot who winds up surviving violent encounters while looking like the various groups he hates was a really solid piece of craftsmanship unfortunately tainted by the real life tragedy that went on while filming. Still, I thought the whole film should have been more in line with this part which deftly recreated the feel of the old series while telling an all new story.

Dante did a lot with his part, “It’s A Good Life” about a little boy with intense reality warping powers who brings a traveling teacher into his incredibly strange house. He does a great job of slowly revealing what’s going on and also lacing the entire thing with cartoons to not only explain what’s going on without smashing you over the head with it, but then become much more a part of the proceedings as the segment progresses (poor Cousin Ethel). There’s something awesomely grotesque about how the toons look when they come into the real world. Since we’re inundated with cartoons, it makes all the more sense that some of the house’s hallways and rooms look like they’re straight out of Tom and Jerry or one of the Warners cartoons seen in the film. Actually, the set design of this movie reminded me quite a bit of what Dante did once the kid went in the deep, dark pit in The Hole.

This segment is also the one I want more of after it’s over. All four portions feel like complete short stories, but there’s clearly a lot more going on here that could be explored more fully in a longer form story. Plus, damn that kid and the mutant bunny are creep-city. Oh and it’s pretty crazy seeing Nancy Cartwright as Cousin Ethel because you can hear her Bart Simpson voice even back then.

Finally you’ve got Miller’s take on “Nightmare At 20,000 Feet” starring John Lithgow in the William Shatner role. Of all three recreated episodes, this is the original I’ve seen the most. This is the one where an airplane passenger is convinced that a gremlin is on the wing of the place tearing it apart. Everyone around him thinks he’s nuts, but, being the Twilight Zone, we know that’s not what’s up. The key to this one is Lithgow’s excellent performance as the flier who starts off already terrified and then skyrockets into anxiety when he starts seeing things that shouldn’t be there. Since he nails it, the whole thing comes off as a more intense journey than you might expect. Of course, it helps that the gremlin looks a lot better than a dude in a carpet suit.

Oddly, as far as anthology films go, I’d give this one a thumb’s up, something I rarely do. Overall the quality’s solid, with great storytelling, acting and direction. As a Spielberg offering, though, it leaves much to be desired. With Twilight Zone out of the way, I’m moving on to Temple Of Doom, which I love, and then a few episodes of Amazing Stories that I believe are on Netflix Instant. After that I’m getting into some pretty new territory with his more dramatic efforts of the 80s and 90s starting with The Color Purple and Empire Of The Sun. I’m hoping to stay a bit more up to date on these posts. Looking back I only did two all year, this being the second. Hopefully I can at least get up to Purple by year’s end, but it would probably be foolish to make any promises.