Not Of This Earth

Not Of This Earth wasn’t exactly my first choice for horror movies to watch from 1988, but as it turns out, I’ve already reviewed or didn’t have access to some of the bigger ones. So many of the big franchises debuted sequels that year — Halloween 4, Nightmare 4, Friday 8, Poltergeist 3, Phantasm 2, Hellraiser 2, Fright Night 2, Return Of The Living Dead 2 and Sleepaway Camp 2 — but I had reviewed those, couldn’t get to them on short-ish notice or just didn’t feel like it (sorry, Pinhead).

Other notable releases include Scarecrows (so boring), Serpent And The Rainbow,Waxwork, Pumpkinhead, Night of the Demons, Monkeyshines, Maniac Cop, Killer Klowns (which deserves a more in-depth review), Dead Heat, Child’s Play, The Blob remake (which I thought I reviewed) and Black Roses. I couldn’t believe how many of the biggies from that year that I’d seen and reviewed and then I stumbled upon a good one: Jim Wynorski’s remake of Roger Corman’s Not Of This Earth starring Traci Lords and Arthur Roberts. What made it the right movie? Well, I had it on hand thanks to Shout Factory’s Corman Classics line of DVDs from a few years back! I’ve also got the original, but that might have to wait until 1957 week. 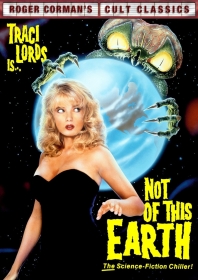 Not Of This Earth is about a race of aliens scouting out Earth to see if they can feed off of its blood. They send a representative — Mr. Johnson (Roberts) — who immediately visits a blood bank to make a withdrawal only to find out that’s not really how they work. Using his mind powers, Johnson gets the doc to assign Nurse Nadine Story (Lords) to be his in-house aid along with his valet Jeremy. When the whole blood bank thing doesn’t work out for Johnson, he starts sucking the life out of people who theoretically won’t be missed like hookers and strippers. Another of his race also comes over, goes nuts and becomes a slasher for no apparent reason (other than they already had that footage from Hollywood Boulevard). Speaking of which, this movie has the most bonkers credits scene of all time because it basically consists of insane monster shots from previous Corman movies that have NOTHING to do with this one. 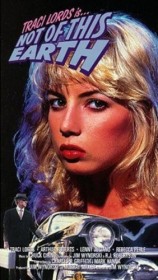 Anyway, since this is a Corman picture, there’s a fun story behind it. Apparently, Wynorksi bet the producer that he could make this movie in 12 days. Part of it was a challenge because Corman directed the original, but Wynorski walked away the winner completing it in 11.5 days! I was actually surprised because I thought this was a pretty well put together movie that didn’t feel rushed. In fact, it’s got a lot going for it. Lords’ casting was obviously a stunt as this was her first non-porn part, but she did a great job as did everyone else. The only times it gets overly campy is when the hookers and strippers are on the scene. Oh, there’s also the crazy lady on the bench and the long-haired, bearded alien who looks like a hung over DJ, but they’re not overly distracting.

Wynorksi, who also made films like Chopping Mall, Return Of Swamp Thing, Munchie and Ghoulies IV, is known for mixing T&A with genre flavors resulting in some pretty fun 80s and 90s films before segueing almost completely into the soft core zone. I love Chopping Mall and owe it a full review, but I think this is the best of his movies that I’ve seen. In a way it feels similar to Phantasm in that the mysterious older man is trying to send humans back to another planet that get all shrunk down, but the horror-humor tone is much different. I also appreciate how Not Of This Earth takes old school sci-fi and horror tropes, views them through a modern lens, mixes in some 80s slasher conventions and comes up with something new and different that’s pretty enjoyable even if it was shot very quickly and reuses footage from other Corman movies.

After the generally dark nature of Green Arrow: Hunters Moon and tomorrow’s Friday Fisticuffs offering it was nice to experience the lighter side of 1988!