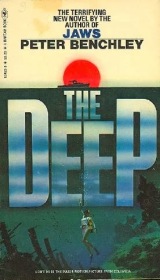 Even though I’ve got an Ambitious Reading List in the works, I just couldn’t resist digging through the trio of boxes in the garage filled with books I haven’t read yet. My aim this time was to grab a whole bunch of scary books for the Halloween season. There are…way too many and I’m sure I’ll only get through a few — especially because I just picked up another stack at the library today — but what the heck?!

So, I started with this copy of Peter Benchley’s The Deep from 1976 because I wasn’t sure if I’d like it. I had a very poor reaction to the time I listened to an audiobook version of Jaws,  so I figured I’d get this one out of the way first.

END_OF_DOCUMENT_TOKEN_TO_BE_REPLACED 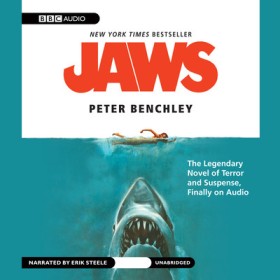 Alfred Hitchcock once said that you shouldn’t make a movie out of a good book. That’s what he supposedly did with The Birds and that worked out pretty well, right? Well, apparently Steven Spielberg did the same thing with Peter Benchley’s Jaws. The book, much like the movie, finds a resort town terrorized by a great white shark. Sheriff Brody, shark scientist Matt Hooper and grizzled fisherman Quint are the only three people willing to go out and put a stop to all this.

I spent most of the day listening to this book while doing work and watching our daughter and have to say, I was pretty bored. Things start off interesting, with Brody trying to figure out how to handle this unusual problem. While, in general, I think the movie is all around better than the book, I will say that the complexities of keeping the beaches open are more deeply explored in the book and make more sense than “the mayor’s a jerk.”

Speaking of the mayor, he’s a far more detailed character in the book, but I’m not sure if that’s such a great thing. The overall problem with the book is that it spends far too much time away from the shark. As you may or may not know, there’s an entire subplot the finds Brody’s wife having an affair with Hooper, whose older brother she dated in high school. There’s a whole dinner party scene and then one where they go to dinner. All of this took about an hour in audiobook form. AN HOUR! Even worse? It didn’t really have much to do with the story other than to make us feel a little better when SPOILER Hooper dies in his shark cage (something Spielberg was supposedly going to keep in the film version, but changed for a bit of a happier ending). At the end of the day, when you’re writing a book about sharks, write about sharks.

I know I shouldn’t be comparing the book to the film as much as I am, but it’s nearly impossible because I’m so familiar with the movie and it’s one of the best films ever made. Still, there are some interesting meta elements that I noticed while listening to the book. First and foremost, the movie kicked off huge interest in sharks that we’re still experiencing today. In a roundabout way, that makes the shark action in the book much easier to picture. In fact, with the ending, I was basically watching a slightly edited version of the film in my head while it was going on.

I don’t think Jaws is necessarily a bad book — it sold like gangbusters when it came out in 1974 — but I do think it’s a less focused version of this story than Spielberg’s. In fact, had the affair subplot been excised or shortened, I would have liked it a lot more. I even enjoyed some of the characters who aren’t in the movie like Hendricks and Meadows, though completely understand why the nicer version of Hooper in the film was able to carry a lot of their weight. At the end of the day, if you’re interested in both the book and the movie, I’d read the book first and then watch the movie, which is the exact opposite thing I would suggest if you’re interested in The Shining.

Finally, I absolutely loved Brody’s line, “I’ll never be as old as I feel today.” I feel like that at least three times a week.

Jaws is one of my all-time favorite movies. It’s an amazing combination of real world drama and horror with so many amazing comedic and dramatic moments mixed in. I truly love this movie. So, why did it take me almost six months to watch after checking out Spielberg’s first two movies Duel and The Sugarland Express? No, it’s not because I didn’t particularly like Sugarland, but more so because I wasn’t as excited about watching a movie I’d seen before. I’ve talked about this here and there on the blog, but since graduating high school I’ve been really enjoying watching new things instead of rewatched movies I love. This actually worked in my favor as I sat down to watch Jaws today because it had been a while since I watched it (I’m shocked I’ve never blogged about it before, actually, but then again I’ve never blogged about The Usual Suspects, Reservoir Dogs or Lost Highway either and those were wildly influential on me).

Everyone knows the plot of Jaws, right? A great white shark starts terrorizing a New England island community in the summer. This presents a problem because the greedy mayor doesn’t want Sheriff Brody (Roy Scheider) to shut down the beaches for fear of losing tourist money. After more and more attacks, Brody teams up with out of town shark expert Matt Hooper (Richard Dreyfuss) and off kilter local shark hunter Quint (Robert Shaw) to go out on Quint’s boat and kill the fish.

What makes Jaws such a great flick is that, in addition to having some truly scary moments (the underwater head in the boat still creeps me out on the same level that Michael Myers sitting up does at the end of Halloween), there are so many great moments with humor and emotion. That bit where Brody’s wife looks at the shark book and yells at her kids to get out of the water is fantastic as is the wonderful scar-comparison scene on the boat. Chills, you guys, chills.

Even better? The film itself has an equally epic behind the scenes story. It took forever to get some of the shots and the studio was freaking out. The mechanical shark — Bruce — didn’t work well which is one of the reasons you only see the shark briefly in the film. This bit might not have been in the script, but it certainly made the film more dramatic. After seeing just bits and pieces, can you get a better reveal than the “We’re gonna need a bigger boat” one? I think not. And this goes to show that Spielberg’s not just a great technical director (as seen in Duel), but has also had great instinctual storytelling instincts.

I really can’t say enough good things about this movie, but I think I’ll just stop here. Gallons of ink both real and digital have been spilled about the movie. If you’ve never seen it, do so immediately. You will absolutely not be disappointed. And if you are? Well, I probably don’t want to talk to you.