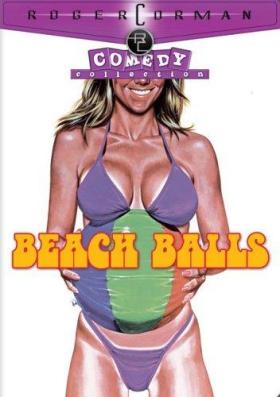 As anyone who reads the blog on a regular basis will know, I’m a big fan of 80s teen and college movies. If it’s goofy, wrought with sexual tension, set on a beach or during spring break, I’m probably on board. That’s basically everything I’ve watched and posted under the 80s Odyssey category and here’s another one.

Netflix is finally starting to understand what kind of movies I like to watch and immediately notified me of Beach Balls‘ presence on the streaming service. I didn’t even notice that it’s a Roger Corman-produced film until after the fact.  Frankly, I was on board when I read that, in addition to this being a movie about a kid pining over a girl, he also wanted to be in a band. That’s a subgenre of 80s teen comedies I didn’t even know I wanted, but I’m in!

The plot follows Charlie (Philip Paley), a beach kid who’s in love with Wendy (Heidi Helmer), but she only digs guys in bands. As it happens, Charlie is a solid musician, he’s just not in a band. At the same time, he’s also dealing with some legal problems after getting drunk one time and borrowing a car from some local toughs who stole the car and think Charlie turned on them when he got arrested. Because of this he’s got to deal with a recovering alcoholic parole officer, his already crazy, super religious mom and Young Republican sister who think he’s a much worse kid than he is. So, can Charlie throw a huge party, get the girl, get the band in front of a record producer and finally get in his own band? Watch the movie to find out.

A lot of this movie is pretty by the numbers, but there were some pretty interesting storytelling approaches I wanted to point out. For one thing, all of the car stuff happened before the movie starts, so we find out about it as it becomes relevant and not in one huge info dump. This actually surprised me considering these kinds of films tend to dispense with exposition in the most obvious way possible. I was also impressed by the ultimate reveal that Wendy doesn’t just date band dudes, which was Charlie’s assumption from the beginning. Those are the kinds of assumptions at the heart of plenty of movies like this, so to see it turned on its head in a realistic matter was fun. Plus, guys, I love movies about kids who want to be in bands, house party movies and bits where ultra religious weirdos get shown the error of their ways. So thumbs up all around.

The cast and crew did a solid job to the best of their relative abilities across the board. Cheapo 80s comedies like this tend to be 50/50 when it comes to seeing all kinds of recognizable faces, but this falls on the “not so much side.” There are a few interesting names on board. Director Joe Ritter was one of five writers on the original Toxic Avenger which had a far greater affect on me than I’d like to admit. Also, star Philip Paley apparently starred as Cha-Ka on Land Of The Lost as a kid. Oh and Steven Tash, who plays Charlie’s best friend Scully, was the kid in the beginning of Ghostbusters during the ESP test. I also thought it was interesting that screenwriter David Rocklin never worked on anything before or after this project.

Also, real quick, how weird is this poster/box art? If you look at it real quick, it looks like the woman is pregnant, right? Obviously, I get what they were going for, but I would have gone for a second draft on this one.

Anyway, if you’re like me and have a strange affinity for movies like Spring Break, Hunk or One Crazy Summer, then give Beach Balls a look.