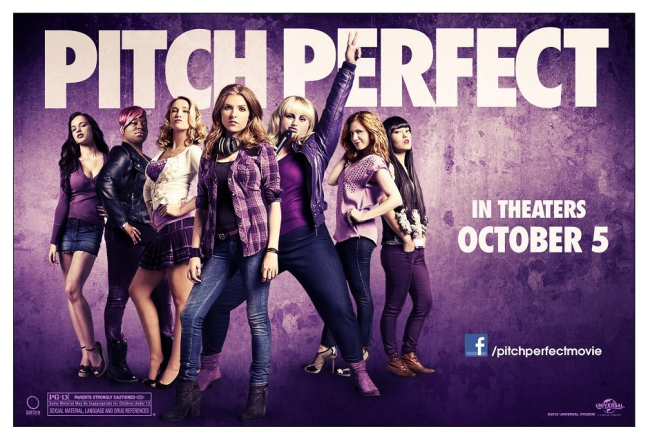 Pitch Perfect might be far from perfect, but I still thought it was a seriously enjoyable film. The only thing I knew about this movie going in was that it was about a group of female singers and that’s pretty much it. I had no idea it was set in college — most of the women in the film are nearing or over 30, though that doesn’t really bother me — or that Anna Kendrick was the main character or any of that. Yet, I still really enjoyed this movie.

I wonder, though, if you might have to be predisposed to this kind of flick to enjoy it. It shares more than a passing resemblance to Bring It On. In fact, I’d put those two movies in the same sub-genre with Fired Up and Stick It and that’s a group of films that I enjoy. I guess it’s basically just a sports movie featuring women and sports I’m not familiar with handled with a solid sense of humor. I’m not sure what this sub-genre should be called, but someone should coin a killer term.

Anyway, Kendrick’s a college freshman who wants to move to LA and start paying her dues in the record industry so she can eventually become a producer. Her dad’s a professor who wants her to get an education. For a while she has no interest until he makes her a deal saying that if she joins some kind of campus group and still doesn’t like it, he’ll help her move out and follow her dream. She winds up joining the school’s all female a cappella group, the Barden Bellas, and things move on from there. They have a rivalry with the all-male group (The Treblemakers) that gets interesting when Kendrick’s love interest joins that group. There’s also the Glee-style structure of hitting regionals and semi-finals and whatever.

You can tell from watching this movie, that the director’s cut was probably about four hours long. It feels robust and full, but also like some bits might be missing. We never quite find out why Kendrick is so mad at her dad (though it is better explained in an extended version of a scene on the Blu-ray). There were also scenes with the sexy English or Australian upperclassman DJ at the school radio station and a few other dangling plot points, but even with all that, I still found this to me an incredibly entertaining and fun movie. I’m also okay with not having every single possible detail about a person’s life even though I’m watching only a 2 hour segment of it. That’s how life is and I feel talked-down-to when every small detail is laid out for me.

I have a confession to make that might also contribute to my liking of this film: I was a pretty big fan of my college’s a cappella group the Owtsiders (we went to Ohio Wesleyan University, which was often shortened to OWU, get it?). Just about any time they had a concert I’d go. They always seemed to be having such a good time, it made me wish I could sing. I think the filmmakers did a good job of capturing not only that onstage presence, but also the kind of weird fandom a group like this can engender (seeing the smallest hint of myself in Benji was a little creepy). The sense of fun I got from the Owtsiders was on screen both in the performance scenes and the one where Kendrick breaks and reveals that she, like me, knows the words to Miley Cyrus’ “Party In The USA.”

More than being clever and funny, the movie makes me want to care about Kendrick’s character. I can relate to people with walls up who don’t want to let anyone in for fear of being hurt. I can relate to trying to be so self reliant that you actively shy away from interacting with people. I get her as a character to the core, of course it helps to understand her when all her favorite songs are about being bulletproof.

There was one funny thing I noticed about the cast of this film. While the women are all doing their things and doing it awesomely (Anna Camp, Rebel Wilson, Brittany Snow, Ester Dean, Alexis Knapp and Hana Mae Lee kill it), the dudes all reminded me of more established actors. Adam DeVine is doing Jack Black in his performance as Bumper. There wasn’t a moment he was on screen that I wasn’t thinking about Barry from High Fidelity, but douchier. The bigger guy that plays McLovin’s sidekick (I’m still not clear what either of them had to do with the clubs as neither of them was actually in one of the groups) was doing his best Eric Stonestreet from Modern Family impression. Even our two sympathetic mail leads at least seemed like existing characters. Jesse (Skylar Astin) looks like Dane Cook and Shia LaBeouf’s love child and Ben Platt has a minor Napoleon Dynamite thing going on as Benji. I’m not saying these guys all tried to be like other performers, but these things popped out to me while watching the movie. Lastly, Utkarsh Ambudkar looks exactly like my friend Kevin which is a little creepy.

So, no, Pitch Perfect is not a perfect movie. It’s not completely original, the cast is way older than it probably should be and some scenes were probably kept in in service of song and dance numbers instead of story, but as a whole I think it really works. If you’ve been burned by the unevenness or downright silliness of Glee, don’t let it keep you away from this movie. If you love Glee, well, you’ll probably dig this movie too. Also, if you like fun, you should dig Pitch Perfect. After writing this, I actually kinda want to watch the movie again…