This week, Mr. Dastardly and I watch two haunted house classics: The Haunting and The Legend Of Hell House!

Listen to the episode here! 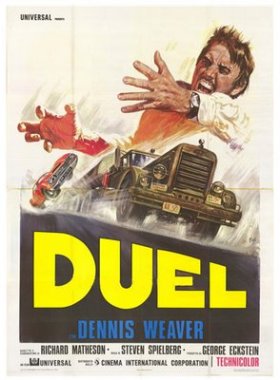 Around the new year, I was seeing a lot of Steven Spielberg in interviews and on TV. Considering he had two movies coming out–Adventures Of TinTin and War Horse–it makes sense. But, it got me thinking about how many of his movies I’d scene. Of course there are the obvious ones like Jaws, ET and Raiders of the Lost Ark that I know I’ve seen. After checking out his IMDb page, though, I realized I had seen about 50% of his movies. That didn’t seem right considering he’s not only one of the best, but most prolific and diverse directors around. I decided then that I would start at the beginning and watch all of his movies from Duel on to War Horse (when it comes out on DVD). I’ve got some of them in my private collection, a few are on Netflix Instant, but everything else is on regular Netflix, so I’ll be good to go.

On paper, Duel should be a ridiculously slow and boring movie. It’s about a tanker truck that torments a man because he passed him. Their cat and mouse game leads them across some desert territory and one of them triumphs. Those are the basics I knew going into the movie (as well as a fairly good idea about the ending which I saw on one of those “Scariest Movies Ever” TV specials back in college). I mean, how scary can a truck be, right?

Pretty friggin’ scary, you guys. There are two very simple elements that make this a movie that doesn’t only not drag but also sucks you in like nothing else I’ve seen and that’s the script by Richard Matheson (I Am Legend the novel and several Twilight Zone episodes including “Nightmare at 20,000 Feet”) and the nascent genius of Spielberg who had directed a few hours of television up to this point as well as some shorts and student films, but nothing this long (it was originally a TV movie that had some scenes added and was theatrically released across the pond). 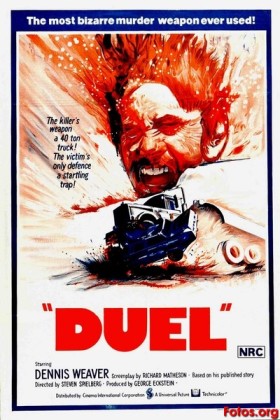 So, while much of the tension was already ingrained in the script by one of the best writers around, Spielberg made a number of choices that really added to it. There’s a featurette on the DVD where he talks about a lot of the things he did, some of which I noticed while watching and some I didn’t. First off, the truck is legitimately scary looking. It’s big and huge and dirty and gross and dangerous looking. He chose that particular truck because it’s cab stuck out like a face instead of being flat. He also had the crew apply dirty and grease every day to make it look worse and even put dead bugs in the grill. He also did some amazing things with cameras, getting angles that really put you into the movie. Some are mounted on the corners of the car while others seem like their right there next to the wheel. In the featurette he explained that he mapped out the entire movie so he’d always know where he was–the whole thing was shot in 12 or 13 days, he couldn’t remember) and that he would use multiple cameras, a car designed specifically for chase/auto scenes and all kinds of lenses to make things look faster and more dangerous than they are. I had heard that he was a kind of a geek when it comes to the tech side of filmmaking, but hearing him talk about it, he really knows his stuff and more impressively, knew it back then when he was 25 years old!

But, it should also be added that Dennis Weaver who plays the main character–David Mann–absolutely kills it. The movie is about a man being pushed to the edge by ridiculously dangerous circumstances and SPOILER overcoming them. Weaver does an excellent job of keeping his character in check and unleashing the rage and fear that comes from this kind of situation, especially towards the end.

You might notice that I labeled this as not only a horror movie, but also gave it the Slasher and Monster tags. While I don’t think anyone could argue against the idea that Duel is a psychological horror film, I think the arguments for the others could be equally made. The truck (or the driver who we never see) is like a slasher in that it is always exactly where it needs to be to give Mann trouble. It stalks him like a slasher–or a monster–at all turns, attacking when it needs to, even going so far as to make it’s evil presence known to other people. At the same time, it’s a big, hulking, ugly monster that wants nothing more than to kill Mann. Why? Because he passed the truck. Or maybe it’s a random selection along the lines of The Strangers (Why us? Because you were home. Why me? Because you were on the road.). Spielberg says in one of the featurettes that the license plates that adorn the front bumper of the truck represent previous victims, something I hadn’t noticed or thought about. In my head, this dude just snapped today, but I like that just well.

In a lot of ways, Duel is, as other people have described it before me, Jaws with automobiles. That’s true to an extent, but it also feels limited to me. This movie is very Hitchcockian, something that Spielberg say in the short story itself, but also something reflected in the score–which is more noise than music. There are definitely times where it sounds like the shrill violins from Psycho make an appearance, though they seem even more primal. In addition to Hitchcock references, there are also ones that Spielberg would go back to. I didn’t catch these, but he mentioned them. The old woman who runs the gas station/snake farm plays a gas station attendant in 1941 (which I haven’t seen) while the old folks who stop and don’t give Mann much help towards the end are on the helicopter in Close Encounters Of The Third Kind. But that’s not all, he also used the same exact dinosaur sound that he used as the SPOILER truck exploded at the end when the shark gets blown up in Jaws. He explained that he’s both sentimental and grateful, like these little nods are way to say thank you to Duel for spawning his career. Which it did. This movie got him Sugarland Express which lead right into Jaws.

I have to say, I was shocked at how much I liked this movie. If you’re a Spielberg fan, you want it to be awesome, but like I said above, you don’t know about a movie that features a truck as a bad guy. I figured it might be like going back and getting the first indie record of that band you really like and realizing it’s alright, hints at greatness, but doesn’t really life up to the classic ones. In this case, though, he started his feature career at the top of his game. To be able to make such a taught, absorbing TV movie that still holds up 41 years later, is nothing short of amazing. If you haven’t seen it, absolutely, positively go out and get a copy of Duel. I’d also recommend checking out the extras that include a few interviews with Spielberg as well as one with Matheson. Awesome stuff.