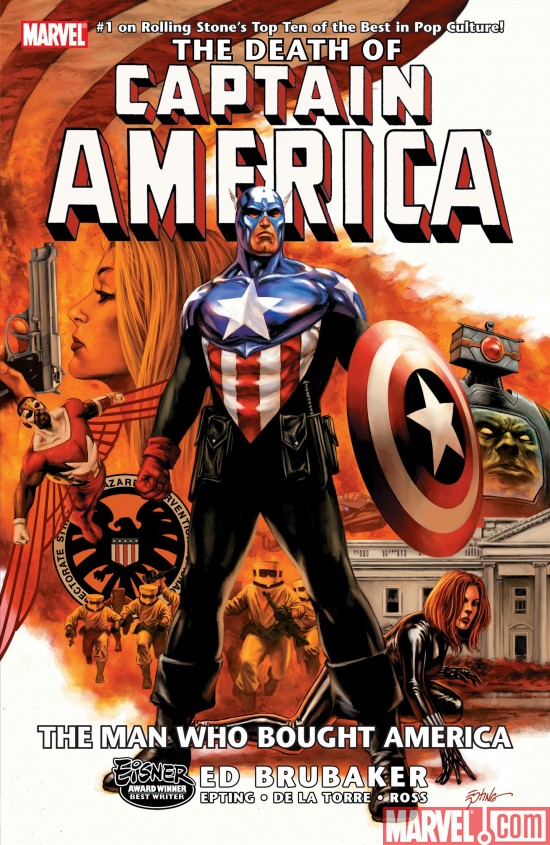 THE DEATH OF CAPTAIN AMERICA VOL. 3: THE MAN WHO BOUGHT AMERICA (Marvel)
Written by Ed Brubaker, drawn by Steve Epting, Luke Ross & Roberto De La Torre
Collects Captain America (current volume) #37-42
I’ve mentioned here and there how much I like Captain America, but I don’t think I’ve ever done a review on one of the trades before. Let me say this right off the bat, I think that Ed Brubaker’s Captain America is one of the best ongoing comic books ever written. I haven’t read a lot of Cap comics to compare it to, but I put it up there with some of my favorite runs of all time like Starman, Sandman and Preacher. That he’s been able to keep up such a high quality of story over so many issues, not to mention through several major events that lesser writers let screw up their flow, is ultra impressive. Brubaker’s Civil War tie-in issues are, in my opinion, better written and more logical than anything else wearing that banner. You can trust me on that one, I had to read it all while working at Wizard for an online column called Civil War Room (I’d link to it, but I think all that stuff is gone now).

I guess I should actually talk about this volume now, which I got for Christmas along with the second and third Immortal Iron Fist trades. What you have here is the second trade featuring Bucky as Captain America. We’re knee deep in the Red Skull’s plan to get his very own president and birth a new Steve Rogers thanks to his captive’s pregnancy (that would be Cap’s girl Sharon Carter). Bucky and Falcon team up and Bucky takes on the Cap from the 50s who thinks he’s Cap and is being manipulated by the Skull and Dr. Faustus. It’s kind of a hard volume to explain without spoiling everything that’s come before and after, but this book is integral for understanding the Skull’s plan and features Bucky Cap’s first real dent in those plans. Don’t bother starting with this trade (that should seem pretty obvious as it’s the eighth in the series), just do yourself a favor and get the first trade or catch up since whenever you left off because, next to Green Lantern, this is the best ongoing comic coming out right now.

I also want to mention the art, specifically that of Steve Epting. I love his simple, but elegant style. All the figures have this amazing presence on the page that is only added to thanks to the inking and coloring. I really wish they would have gone to him for Captain America: Reborn instead of Bryan Hitch. I have never understood Hitch’s appeal and really dislike his art. Plus, I feel like Epting is just a better artist all around and should have gotten the chance to draw Steve’s return. Not that it really matters because the ending has been spoiled already. Ah well, moving on. 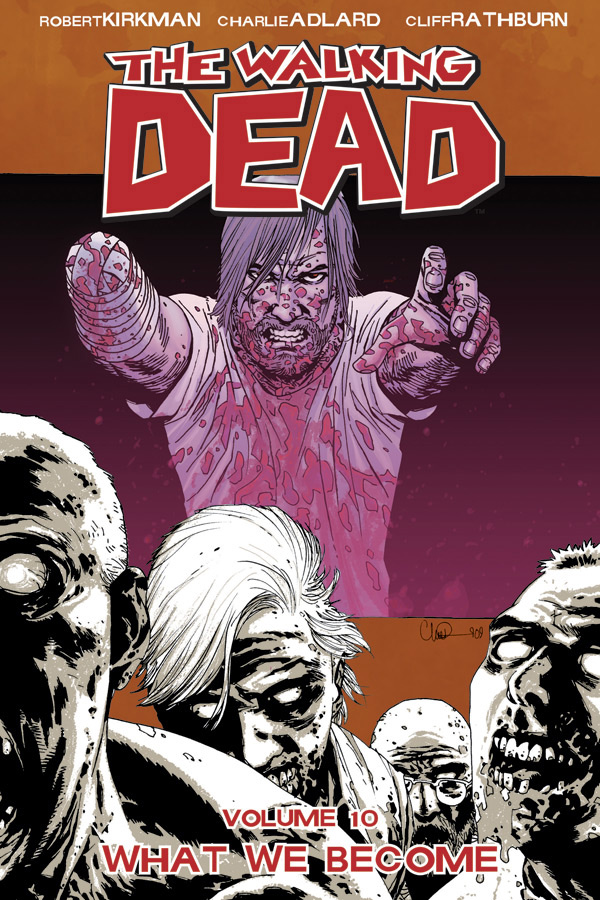 THE WALKING DEAD VOL. 10: WHAT WE BECOME (Image)
Written by Robert Kirkman, drawn by Charlie Adlard
Collects Walking Dead #55-60
I’ve had a lot to say about Walking Dead to pretty much anyone who will listen. I have problems with some of Kirkman’s writing ticks, like how he always tells instead of shows, but this 10th volume didn’t fall into a lot of those traps, thankfully. In fact, I think this is one of the better Walking Dead trades all around. Again, the tenth volume of any comic isn’t a good place to start, but as someone who’s read most of the issues, I think it’s one of the better ones. I don’t want to spoil too much, but this one picks up right after a pretty huge tragedy in Rick’s life and he’s going a little crazy. By this point, Rick and his fellow followers have teamed up with a trio of people trying to head to Washington, D.C. in order to get in with what’s left of the government. There’s a scientist, a crazy military guy and a girl who’s in love with him. We learn more about the military guy in this issue while he, Rick and Rick’s son Carl head back to a house that Rick stopped off at on his way to find his family early in the series. It’s a pretty cool callback to a character I’m sure most people figured would never be seen again. There’s also a ton of action as this trio-turned-quartet try to outrun a horde of zombies who are all after them (we’re talking hundreds of biters). All that mixed with a fair dose of drama from some of Rick’s people (including an attempted suicide and a faction wanting to break off on their own) make for one of the more fulfilling arcs in the book’s impressive run. Oh, and, to be fair, there’s a story that the military dude tells that I’m glad didn’t have a visual flashback, it would have been ultra creepy, sad and depressing. 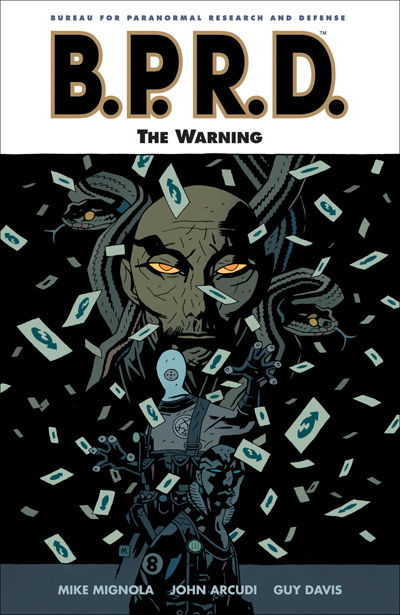 B.P.R.D. VOL. 10: THE WARNING (Dark Horse)
Written by Mike Mignola & John Arcudi, drawn by Guy Davis
Collects B.P.R.D.: The Warning #1-5, “Out Of Reach” from Hellboy Free Comic Book Day 2008
Haha, I just realized that all three books I’m reviewing are pretty terrible jumping-on points for potential new readers. The best I can tell you is that, these series’ are all so good, that I’ve followed them this long, going so far as to buy the trades (or finagle them whenever possible). I remember reading issues of The Warning while still at Wizard and having no freaking clue how one issue tied into the last. Part of that comes from reading upwards of 20 comics a week and part of it comes from the fast and furious approach that Mignola and Arcudi took with this trade. A lot goes on that has to do with the ever-growing war on frogs and other evil things growing in both B.P.R.D. and Hellboy miniseries’. We find out more about the mysterious Panya and Gilfryd, witness a full-on destruction of Johann Kraus’s hometown thanks to giant monster robot things built by trolls or some such and a fight between one big monster and another one being manipulated by Kraus. This trade really has everything that makes B.P.R.D. awesome, big crazy monster stuff, interpersonal character development, the progression of a gigantic storyline and great action scenes. And, you could actually do a lot worse than starting with this or any other random B.P.R.D. book. If B.P.R.D. was an ongoing, it would also be on my list of the greatest ongoing comics. Actually, I wish more companies would take this route for books that might not do as well as ongoings. I also wish they’d take a cue from Dark Horse and include the level of extras that Dark Horse does. Almost every volume has an intro by Mignola or Arcudi as well as a sketchbook in the back with designs from Mignola and whatever artist is working on it. All the Cap trade has is a “Previously In…” paragraph on the inside front cover and Walking Dead doesn’t even have the covers. And don’t worry, the next Trade Post will have more books that anyone can just pick up.

In my ever-expanding quest to read more Iron Man comics I decided to give a few recent trades a shot, which brought be to Iron Man: Director of S.H.I.E.L.D. and Secret Invasion: War Machine. I wanted to read all of the post-Civil War Iron Man books, but couldn’t find them in the library, so this will do.

As some of you may know, I was involved in the weekly Civil War Room review column on wizarduniverse.com lead by former Wizard staffer Rickey Purdin. I enlisted thinking it would be a seven week commitment (that’s how long it was supposed to take to come out right?). Well, it turned into an over year long commitment in which I read 99% of the Civil War related comics (thank you vacation). Anyway, because of all this, I feel pretty confident in saying that Iron Man was not a well handled character at the time, at least in my opinion.

So, with that in mind, I was pretty apt to skip Iron Man’s post-Civil War comic which saw him in charge of S.H.I.E.L.D. an organization most well known for being lead by one of the coolest characters in the known universe, Nick Fury. But, alas, that didn’t keep me away forever.

This trade is a pretty interesting one. The writers Knauf spin an intriguing yarn with plenty of espionage and superheroics all the same. I really like how Tony has built Iron Man-like armor for his S.H.I.E.L.D. agents. That’s a cool touch that really makes sense. Also, I like how Dum Dum Dugan doesn’t like Tony’s way of running S.H.I.E.L.D. (like a business instead of a military organization). There’s some pretty cool moments between the two of them as their relationship grows over the issues.

The book, which collects Iron Man #15-18, also features the return of the handless Mandarin who gets the alien power rings surgically inserted into his spine. I really wish I had the next few volumes to read between this and Secret Invasion to see how that played out. Some day I guess…

All in all, good stuff. Maybe not an easy entry point for new readers, but it’s a good read for the initiated and also reprints two older stories, one starring Nick Fury, the other Iron Man. There’s also reprints of some Marvel Spotlight: Civil War stuff and Marvel Handbook stuff, so that’s a good deal.

Written by Chris Gage and drawn by Sean Chen

This book collects the repurposed Iron Man: Director of S.H.I.E.L.D. issues (#33-35) which were dubbed War Machine: Weapon of S.H.I.E.L.D. while Iron Man was stuck in the Savage Land for six months.

I actually really dug this story. It’s one of the cooler Secret Invasion tie-ins, far as I’m concerned. What you get is Jim Rhodes, a.k.a. War Machine, getting a distress call from Tony telling him that StarkTech had been compromised by the Skrulls, but luckily Rhodey (who’s apparently a cyborg who looks an awful lot like Cyborg now) doesn’t have StarkTech inside him, so he’s cool. Tony also leads him to a satellite that’s shielded from everyone that also transforms into a giant robot that Rhodey can control.

The story also has a pretty good tussle with the Winter Guard, some cool Super Skrulls that actually get identified (why couldn’t they tell us who made up ALL the Skrulls?!) and a character by the name of Suzi Endo who is apparently known, but not by me. I wish this book would have come with some kind of intro or a Handbook entry on some of the characters to let me know what’s up with them, but I got the gist of it. I haven’t read the new War Machine book, but this definitely makes me want to, especially if it has a satellite that transforms into a giant robot!!!