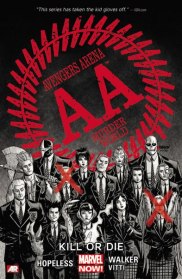 Avengers Arena was one of those books that I heard about because it raised the ire of the internet (or at least the part where people who can’t accept that comic characters are pretend) because it killed off some beloved younger characters from the Marvel U. When I saw all three volumes available on the library system, I requested all three and dove right in.

The idea here is that the book, written by Dennis Hopeless and mostly drawn by Kev Walker, revolves around a mysteriously powered-up Arcade brings 16 young heroes to Murder World and tells them they have 30 days before they can leave. At that point, only one can exit, so they should probably kill each other. As it happens, this is something that a great deal of the characters from Avengers Academy, Runaways and other books don’t have a big problem with the idea. END_OF_DOCUMENT_TOKEN_TO_BE_REPLACED

I can’t say for sure, but I believe Runaways was the last comic I decided to check out after reading about it in Wizard. I went on to intern and work there and discovered all kinds of amazing new and old comics thanks to suggestions and coverage, but this would have still been in college before I had any real connection to the mag aside from a subscription. But even then, I didn’t actually start reading until the second volume. At some point I read through those little digests to get caught up, but when it came to actually adding this comic to my trade collection, I wanted to go with the larger scale hardcovers. Eventually, I got my hands on all three of Brian K. Vaughan’s run and have them proudly displayed, but it’s probably been six or seven years since I read this original run.

If you’re not familiar with one of the most beloved Marvel Comics of the past decade, Runaways revolves around a group of kids who find out their parents are supervillains working for giant old gods. They decide to rebel, go on the run and figure out what to do with the new information about their folks they’ve learned. Along the way they also discover they have their own abilities or accessories to help them along the way.

Like a lot of BKV comics (Saga, Y: The Last Man, Ex Machina), this one features well drawn characters with solid personalities and quick wits going through relatable experiences painted on top of a superhero canvas. Each of the lead kids has realistic moments of heroism, cowardice, failure, success, courage, doubt and everything else you feel on a daily basis which means just about everyone can find something to relate to in every issue if not page. They’re just feel them in regards to their parents who may or may not want to kill them. That’s really the key to BKV’s continued success in comics: he keeps his stories fairly simple, zeroes in on character, throws a few twists and turns along the way and just makes great, solid stories that have a low barrier of entry. And most of all? He makes it look easy.

I think Adrian Alphona’s art reflects that seeming simplicity. He’s drawing real-looking kids in some fantastic moments but never loses sight of their human-ness. I will say that some of the earlier issues in this collection seem pretty slight and I think that’s a result of some thin line-work. There’s also some pretty big inconsistencies with the characters from panel to panel and page to page, but you really get a sense of the artist’s growth as these issues progress and then experience an almost quantum leap in quality going into the next volume. Like I said when reviewing The Dummy Line, it can be fun seeing an artist of any kind progress when you’re not looking for “perfection” all the time.

Much like my experience going back and re-reading Y: The Last Man, I found it interesting comparing not only my memories of this book to the actual material, but also the things I’ve heard and read about it since then. BKV gets a lot of well deserved praised in the comics community, but that can distort your perspective a bit when you finally sit down to absorb (or in this case reabsorb) the material. I really enjoyed this reading experience, but I will say that it felt a little too drawn out at times. That might be because I knew the ending and was waiting for it or that I thought one of the the things that happens at the end actually happened much sooner. Whatever the case may be, I still had a great time experiencing this first run of Runaways and feel like I have a more realistic relationship with the work now, which is always a good thing.